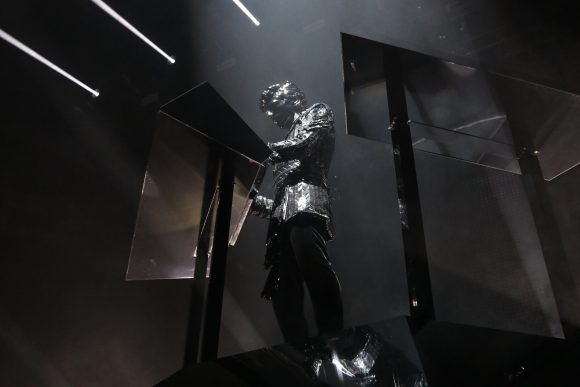 Mike Lévy created his alter ego Gesaffelstein by fusing together the German word of “Gesamtkunstwerk,” meaning “total work of art,” and the last five letters of Albert Einstein’s surname. Gesaffelstein has worked hard cultivating a name for himself in the past ten years, collaborating artists such as Daft Punk, The Weekend, Nicolas Jaar and Kanye West. His live performances are a representation of his claim to genius and extensive catalog.

His live shows are an example of high budget techno at its finest. Relying heavily on intricate light pulses synced to the beats, he creates an immersive experience for the concertgoers. Yet, there is no emotion placed into the set. Everything feels artificial as Lévy hides behind two prisms of unknown instruments.

The show began with the slow fade of the house lighting paired with a synthesized rumble that grew increasingly louder as the lights dimmed. On stage, Lévy emerged from behind the veil of black curtains, bathed in white artificial light. The intro of his track “Humanity Gone” echoed through the venue. The DJ was then reborn sporting an outfit plated in chrome, reflecting the LED’s from above. 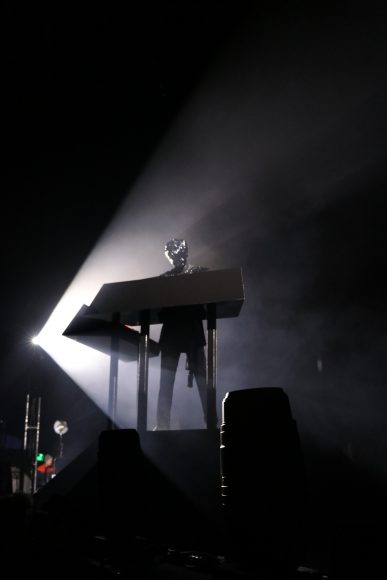 Lévy then cycled into his 2013 nightmare-gauntlet of a track “Pursuit.” The song is structured around a repeated synthesized bass “ping” and is accompanied by reverberated claps and fragmented hi-hats. A classic industrial techno track, it showcases the best aspects of Gesaffelstein’s work.

The Denver gig then cycled into some of Gesaffelstein’s more recent tracks from his most recent EP, “Novio Sonic System.” The EP sees Lévy returning to the industrial-techno he is known for. It also offers unique opportunities for live performance. All of the tracks played from “Novio Sonic System” at Wednesday’s show decorated the Mission Ballroom with red LED’s, reflecting the simplistic EP cover art which consists of a single red bar. The evening was wrapped up with a continuation of “Humanity Gone,” a staple of the performances on this current tour.

A high-budget techno tour like Gesaffelstein’s raises questions as to how each concert experience can be so vastly different. Lévy has finely crafted a performance that strives to feel authentic in the moment. However, due to the lack of interaction with the audience, Gesaffelstein is placed on a pedestal for concert-goers to marvel over his hard work. His set is one that has been finely cultivated and choreographed with lighting but is not different from the previous setlists on the current tour, creating a concert experience that is unique in the moment but not different from the rest.

Gesaffelstein will continue to tour for the rest of 2019 and into 2020. More information can be found here.