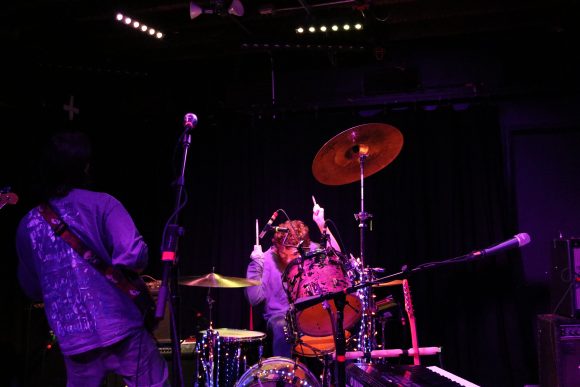 Alex G and backing band put on a show at the Denver’s Marquis Theater this past Wednesday. Nov. 6, 2019 (Zack Cohen/CU Independent)

(Sandy) Alex G played to a packed house at Denver’s Marquis Theater Wednesday. The theater took on a basement or a garage aesthetic; appropriate for the group’s distinctly DIY sound. The venue was sold out well in advance — a common occurrence for the lo-fi leaning indie-rockers.

(Sandy) Alex G was once referred to as indie-rock’s best kept secret. It is the project of Alex Giannascoli, who got his start in the Philadelphia DIY scene earlier this decade. Giannascoli rose to relative stardom in online fan spheres after releasing multiple albums on Bandcamp and Youtube. Giannascoli later signed with Domino in 2015 and has since released three albums under their label. His latest effort, “House of Sugar” sticks to the sound he has become known for. Beautiful lo-fi melodies, sonic experimentation, and haunting emotional lyrics. 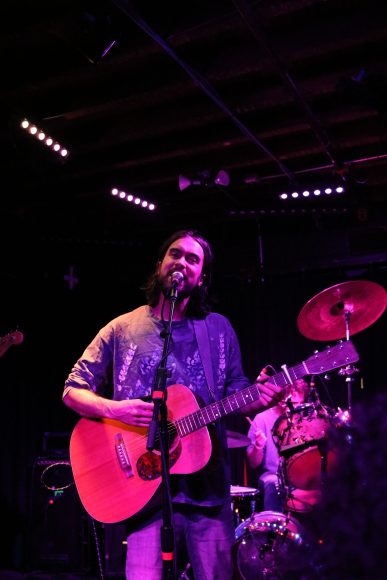 Alex Giannascoli rocks out on his guitar during a show at Denver’s Marquis Theater. Nov. 6, 2019 (Zack Cohen/CU Independent)

The band began their set with a popular single from the group’s latest album, “Gretel.” Band members took the stage as the song’s pitch-shifted intro played, and then came in all together, loud and forceful. It was immediately clear that the Giannascoli and his three bandmates have mastered these songs. They were tight and well-rehearsed.

In between more popular songs like “Bobby” and “Hope” were deep cuts from all across the (Sandy) Alex G discography. Giannascoli’s songs take on a different dimension when played live. “Mis,” which meanders and wallows in its longing on the studio version was transformed into a joyous sing along when played live. Giannascoli and crew also took advantage of their full band setup to build walls of noise that punctuated more aggressive songs like “Kicker” and “Icehead.” After pretending to have a stomach-ache and leaving the stage towards the end of the set, Giannascoli quickly returned for an unceremonious encore.

There is a very personal element to his songs, something that is difficult to put words to, but which was evident in the crowd at Wednesday’s show. It was as if the band was playing a show to each individual audience member, their heads swaying back and forth, eyes closed, singing along with the band.

The mood of the evening was mixed between intensity and comfortable tranquility,  like an unspoken agreement between band and audience about when to lose yourself in the music and when to just goof around. The band’s drummer was tight and their guitar soundscapes were incredible for a live performance; this was impressive production for a venue like the Marquis. The group brought intense energy and created an immersive concert experience without any lights or graphics behind them. The music spoke true to the caliber of musicianship Giannascoli possesses. 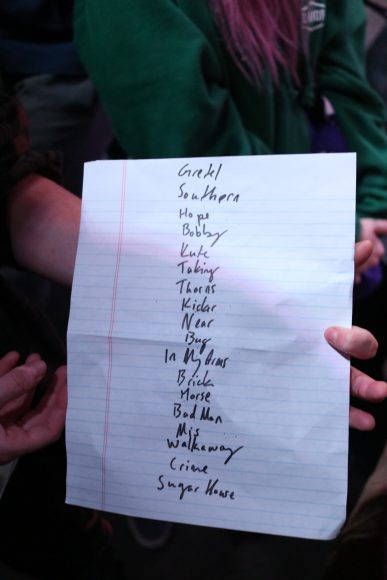 Even though he had previously joked that “We don’t do requests anymore, there was an accident last time” Giannascoli did make time for a few song requests during the encore. One of these was “Gnaw” a track only available on Bandcamp and Youtube. Shouts of joy went up in the crowd as Giannascoli strummed the first few chords, and the crowd hummed along to the nostalgic tune about childhood memories. The band took the song past its normal runtime, moving into a twangy, country-influenced jam, as audience members danced with themselves to the music.

(Sandy) Alex G was able to conjure raw energy that is difficult to attain on a studio album at Wednesday’s show. The walls of sound that they built up around these simple songs came in waves throughout the night, washing over the crowd and throughout the venue. The band ended their set with “Change,” another fan favorite, whose lyrics encapsulate the ethos of (Sandy) Alex G—if he has one. Giannascoli led fans through the song’s chorus, and the room wailed in unison: “I don’t like how things change.”