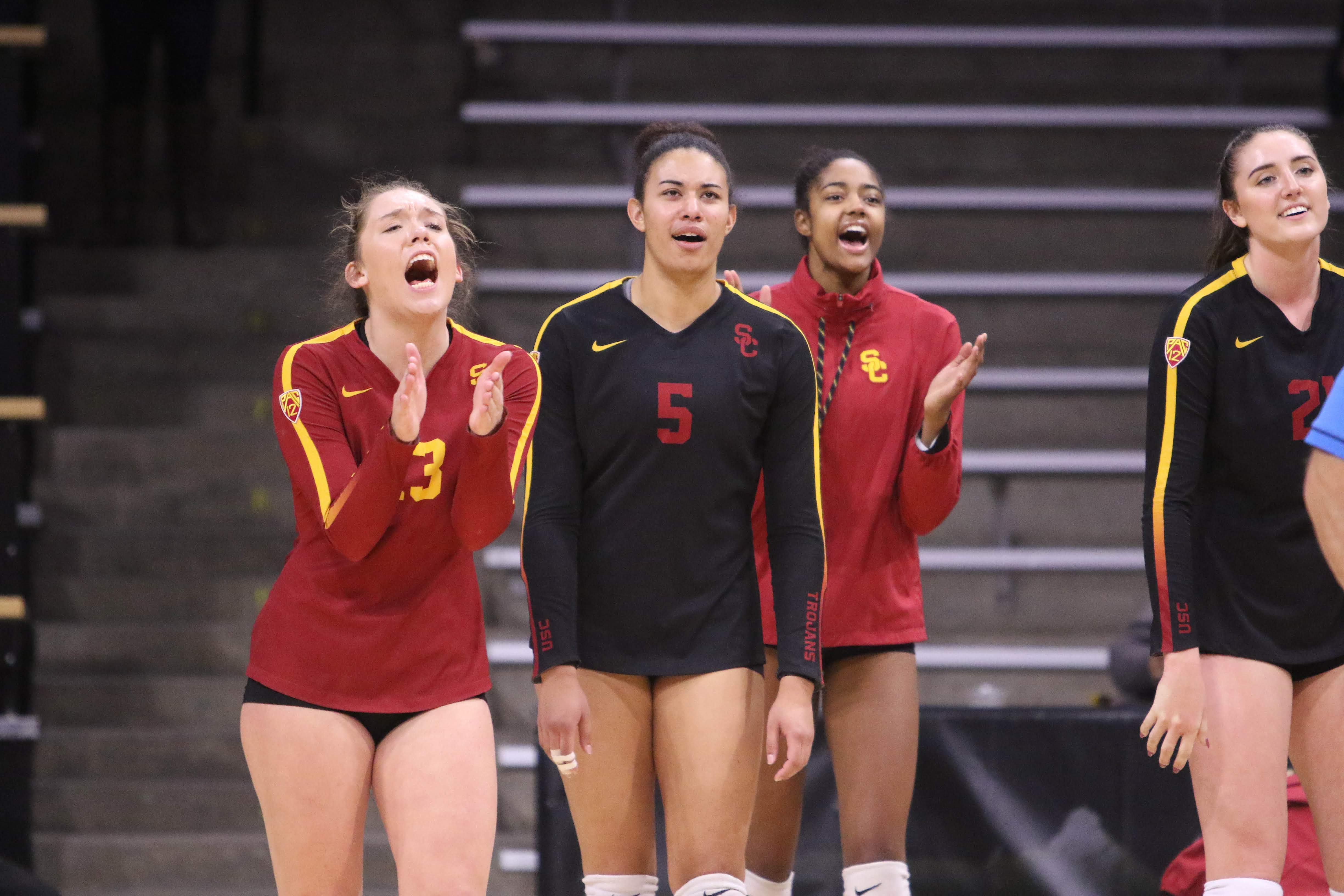 The University of Southern California bench cheers on their teammates after beating the University of Colorado during the second set at the CU Events Center on Oct. 11, 2019. (Kara Wagenknecht/CU Independent)

The University of Colorado women’s volleyball team lost to the University of Southern California Trojans 3-1 on Friday. The loss extends CU’s 0-5 start to conference play.

Freshman outside hitter Elissa Alcantara made a splash in her first match playing in every set for CU with 12 kills.

“This is really the first opportunity for Elissa to get a lot of playing time and I thought she did a nice job,” said head coach Jesse Mahoney. “I think the next time she’s on the floor she’ll be a little bit better. … It was good to see her do a lot of good things tonight.”

The first set was back and forth with six lead changes and nine tie ball games. The Trojans eventually took the set 26-24 after reaching a deuce.

The Buffs found an early 3-0 lead to start the second set but lost it midway through to a kill from Trojan freshman outside hitter Emilia Weske. Colorado wouldn’t see the lead again, as USC won the set 25-20.

In what seems like a common thread among CU sports at the moment, the Buffs were missing players due to injury.

Again, CU took the lead early in the third set. This time, however, they never let go, winning the set 25-23.

The Trojans held the lead for the entire fourth set and when the Buffs tied the set 20-20, a service error gave the lead up again. CU would rally though, tying again 23-23 and forcing USC to take their last timeout of the set. However, two quick kills just after the timeout gave USC the set 25-23 and the match 3-1.

Losing close sets to eventually lose matches has been a theme for the Buffs in their Pac-12 play, with an average score differential of only -3.38 points per set.

“It’s no fun to lose. It was good for us to play four really competitive sets,” Mahoney said. “I thought we put ourselves in a position to win three of those and couldn’t quite finish. I was proud of our effort, I was proud of the fact that I felt like we got better as the match went on.” 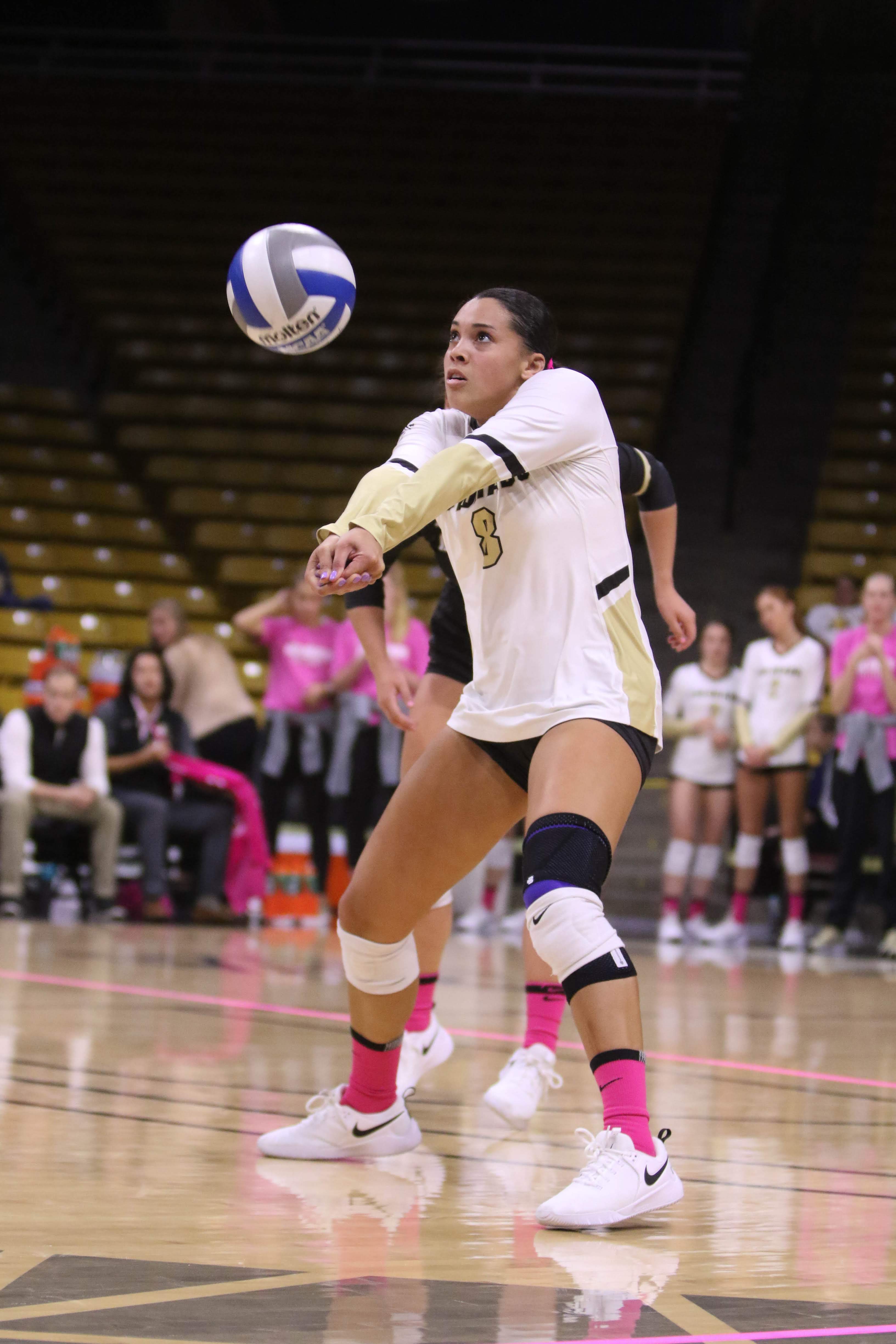 Senior outside hitter Justine Spann passes the ball during the second set at the CU Events Center on Oct. 11, 2019. (Kara Wagenknecht/CU Independent)

Senior outside hitter Justine Spann had a great night with a career-high 25.5 points and five aces.  However, Spann is focused on the team.

“It definitely helps being at home, that energy. We always talk about taking advantage of (it) when we’re at home,” Spann said. “I felt like our team really executed the game plan.”

Now the Buffs turn to their match against the University of California Los Angeles on Sunday, hoping to find their first win against a Pac-12 opponent. Mahoney said this is the best the team has played so far and looks to carry that strength to Sunday.

“That’s as good a match as we’ve played,” Mahoney said. “If we played that well (all season) we wouldn’t be 0-5 right now. We have to buy into that and understand that and show up on Sunday and continue to play our hearts out.”

The Buffs will stay in Boulder on Sunday, facing the UCLA Bruins at 2 p.m. MST. 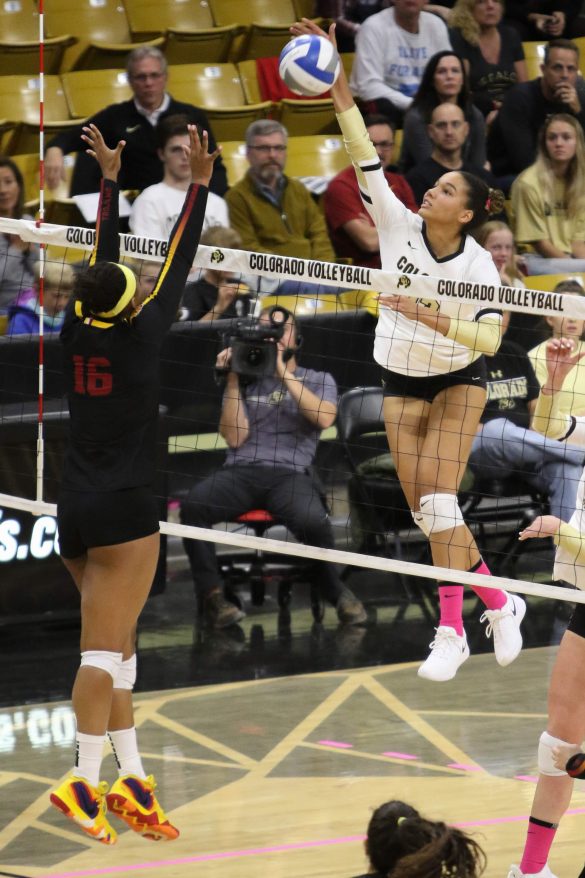 Freshman Sterling Parker hits the ball to score a point late in the first set at the CU Events Center on Oct. 11, 2019. (Kara Wagenknecht/CU Independent) 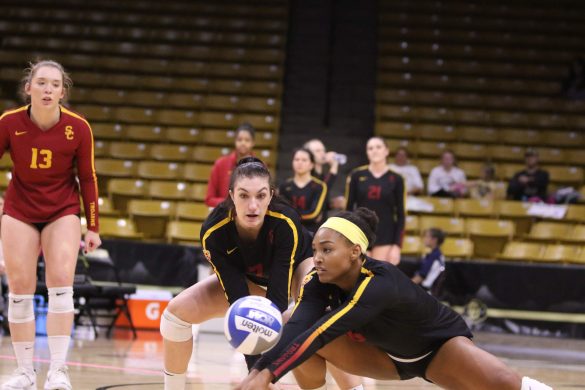 Senior outside hitter Khalia Lanier dives for the ball during the third set at the CU Events Center on Oct. 11, 2019. (Kara Wagenknecht/CU Independent) 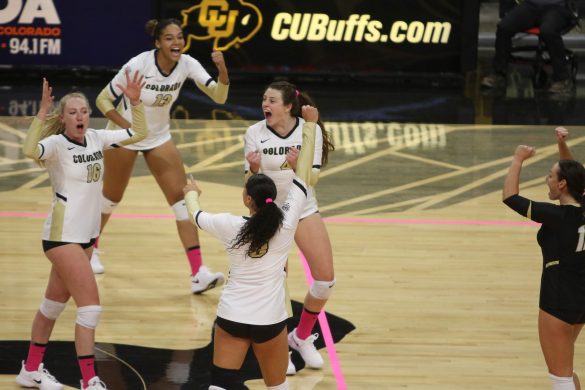 The team celebrates after getting ahead during the first set at the CU Events Center on Oct. 11, 2019. (Kara Wagenknecht/CU Independent) 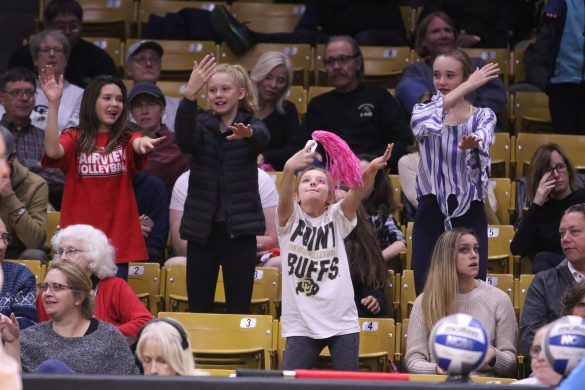 Young fans participate in the macarena during a timeout at the CU Events Center on Oct. 11, 2019. (Kara Wagenknecht/CU Independent) 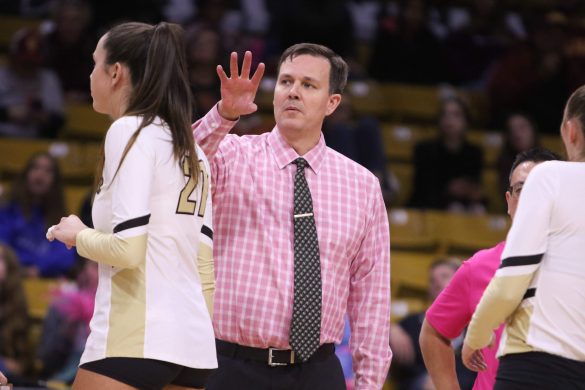 Head coach Jesse Mahoney explains a play during a timeout at the CU Events Center on Oct. 11, 2019. (Kara Wagenknecht/CU Independent) 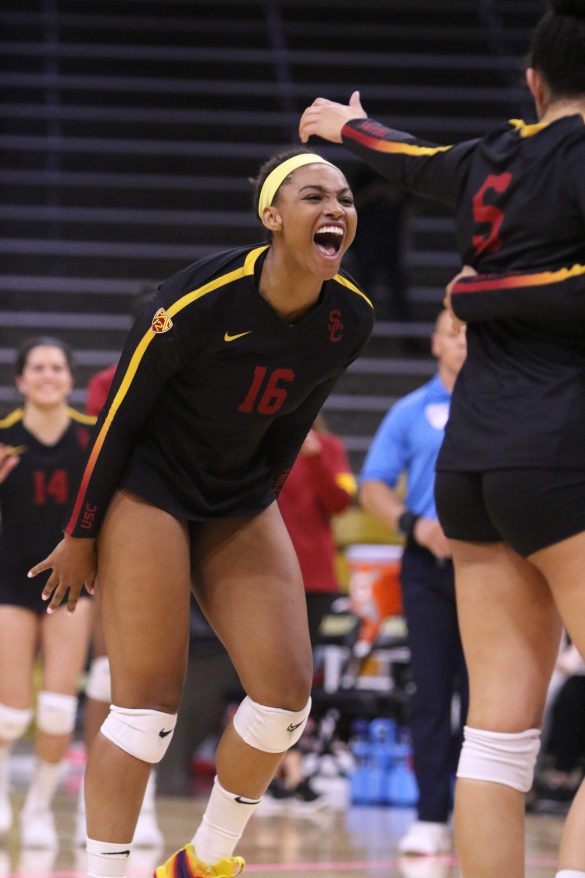