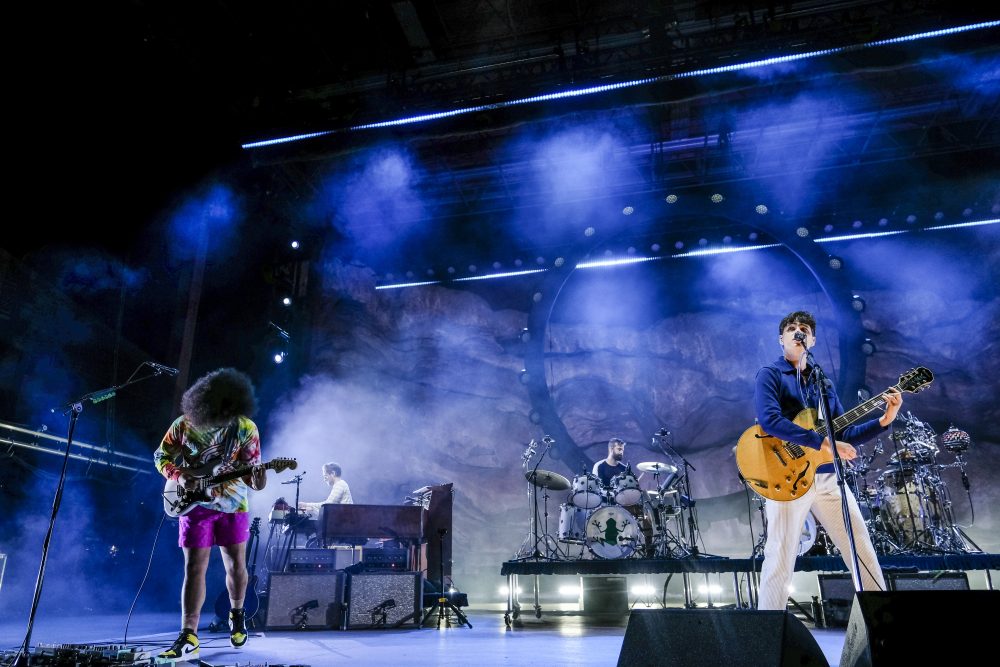 Vampire Weekend fans have been patiently waiting, for six years, for the band to return to Denver’s Red Rocks Amphitheatre. They were finally rewarded Tuesday night with a performance from the band, the first of two back-to-back shows at the venue, to tour their fourth album “Father of the Bride,” released in May. It’s safe to say that the night surprised even die-hard fans with a mix of old and new sounds, woven together in unexpected ways.

Soccer Mommy, the Nashville-based outfit fronted by Sophie Allison, kicked off the evening. The band started out with ethereal, drifting sounds before ramping up to more intense, reverberating riffs. Allison’s voice, unassuming yet powerful, echoed across the rocks as her band finished up with songs like “lucy,” their latest release (and the namesake of this writer, who enjoyed the song quite a lot) and “Scorpio Rising,” off the 2018 album “Clean.”

In some ways, the night was everything that a Vampire Weekend fan, whether newly minted or die-hard, would expect. They certainly made up for lost time from those six years away with a rollicking set that extended for over two and a half hours – it felt like a journey. Bassist Chris Baio, one of the band’s original members, and guitarist Brian Robert Jones, of Human Natural, brought in chaotic, hyper energy, traveling around the stage in bounds and thrusts. At the helm of the set, lead vocalist Ezra Koenig threaded mischievous, wide-ranging melodies to launch songs out through the crowd.

The tone generally remained bubbly, bright and beachy – if anything, the band sounded better than recordings, which underscored its members’ musical abilities. Greta Morgan, most recently of Springtime Carnivore, is touring with the band on keyboard, guitar, percussion and as the female backing vocalist. Her warm harmonies stepped in on several tracks, including to fill in for Danielle Haim’s recorded feature on “Married in a Gold Rush.” 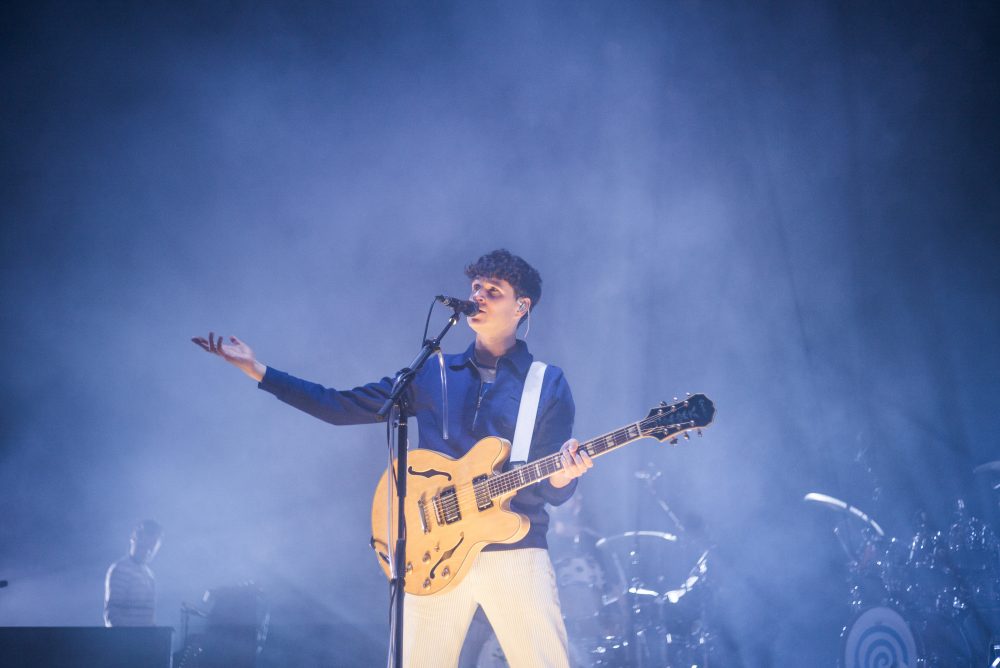 Hearing and watching the band live also helped explain sounds from their studio records that were previously mysteries. The tinkling notes throughout “Step” made much more sense when visually connected to their origin, a harpsichord. In “Rich Man,” many of the softer percussive beats turned out to be wooden claves and shakers.

Yet in other ways, the night bloomed beyond expectation under the moonlight into an experiential soundscape. As the night went on, the show drifted into the territory of Phish and the Grateful Dead, with extended jam-style interludes. At a couple of points, Ezra popped out of the fray to offer up lyrical narration from an unknown source. “Hudson” became even spookier than normal, with warped, ghostly guitar features to honor Halloween’s approach. For good measure, the band threw in SBTRKT’s feverish “NEW DORP. NEW YORK,” the recording of which featured Ezra. He and Brian shared multiple epic guitar duets throughout the set, including a broken-down walk-around of the main riff from “Sunflower.” To his credit alone, Brian more than held his own as lead guitarist, amplifying the funk influences in groovy wah-wah’ing highlights. 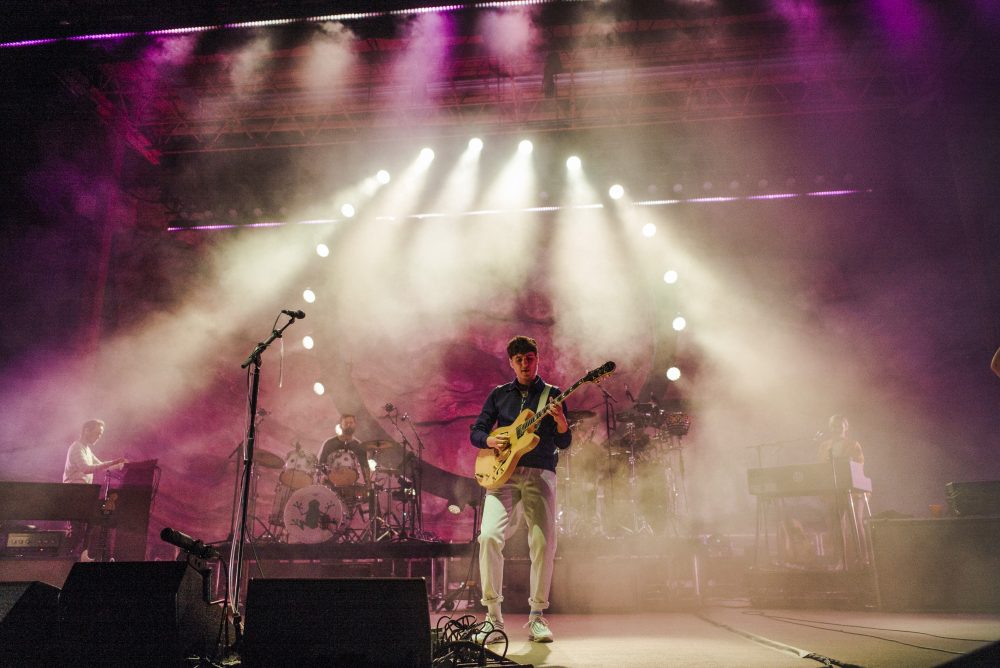 Perhaps the best part of the night occurred during the encore, which included a ceremonious unfurling of flags at the top of the stage during “Big Blue” with graphics representing a number of songs off of “Father of the Bride.” Soon after Vampire Weekend checked their watches and found they had time in their set to take audience requests. Anyone who’s been to Red Rocks can understand how this is a mildly absurd idea – the venue accommodates almost 10,000 people. Yet Ezra asked for some lights on the crowd, and like everyone’s favorite teacher, picked two lucky fans. A kid in a tie-dye sweatshirt called for “Stranger,” and Ezra and Greta interwove harmonies well enough to make Simon and Garfunkel proud. Then, an audience member sporting a Muddy Waters shirt requested “California English,” to which Ezra said, “that’s a hard one to sing,” and launched into the rapid-fire sprint of a song without hesitation.

Maybe Vampire Weekend will be the next Grateful Dead, or maybe they’ll just be the group that will always remind a certain generation of their middle school, high school and college days. Regardless, it’s safe to say that Denver’s hoping they won’t wait another six years before coming back to town.