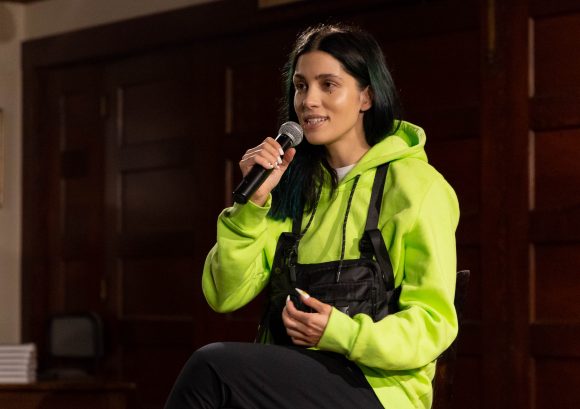 Nadya Tolokonnikova, the co-founder of Pussy Riot, speaks about her childhood and how it has shaped her life. Sept. 28, 2019 (Casey Paul / CU Independent)

Political activist and co-founder of punk-rock group Pussy Riot Nadya Tolokonnikova spoke at Colorado Chautauqua’s first annual University for a Day event on Saturday night. In a sold-out talk titled “10 Things You Always Wanted To Ask Pussy Riot,” she shared stories of her activism, the current state of Russia and advice for rising activists.

Tolokonnikova explained at the beginning of her talk that her inspiration came at a young age. She grew up in Siberia with a father who was an artist and writer. She first left when going to Moscow for university to study philosophy. During university, Tolokonnikova became critical of the Russian government, specifically with regard to women’s rights. She channeled this anger towards Russia’s laws and the ideas she learned in school into her art.

“One of the things that adds most to art and its principles is passion,” Tolokonnikova said.

Tolokonnikova explained that Pussy Riot was meant to be a way to anonymously protest rights that are unavailable to women, such as not being able to become a priest in the Russian church. Going beyond societal norms and influencing people in power was the number one way they could fight this injustice.

“Everything I heard from adults is just to follow this tradition,” Tolokonnikova said. “We decided to make an all-girls collective to sound these issues … a voice that did not have a face but only ideas.”

One of Tolokonnikova’s main activism work currently looks at prison systems across the world. She experienced prison life firsthand after protesting with Pussy Riot in the Moscow Cathedral of Christ the Saviour. The Russian government sentenced her and the other activists to two years in prison.

Tolokonnikova said that she and the other women were forced to work 16 hours a day, only getting one day off each month.

“You don’t have access to basic things like medicine in prison,” Tolokonnikova said. “Russian courts do not care about human rights.”

“We decided to make an all-girls collective to sound these issues … a voice that did not have a face but only ideas.”

Within prison, Tolokonnikova faced harsh working conditions, zero medical support, threats to her own life by guards and multiple other issues that go against United Nations human rights laws. However, as a result of her activism after prison, many of her former prison bosses have been fired or have current legal action against them. One of them is currently on house arrest.

On the topic of the current state of activism, Tolokonnikova says she has hope. She explained that while people in Russia are commonly neutral on the topic of climate change, she sees other countries doing something about it.

“People don’t like Greta Thunberg in Russia but I love her,” Tolokonnikova said. “But students in Russia are waking up.” 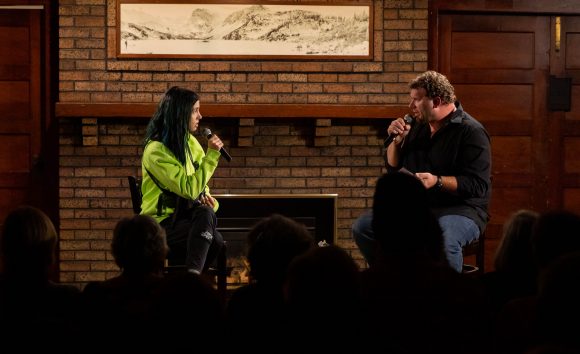 In the 2000s, there was talk amongst activists in Russia about hurting law enforcement and fighting back against them. Tolokonnikova did not want to do this and instead urged others to humanize those who fought against them. She organized a protest where she kissed officers instead of fighting against them. Because Russian law enforcement does not carry guns, activists have far less fear when approaching police. Though this campaign was not well known outside of Russia, Tolokonnikova felt it was a very important time in her activist career.

“Our bodies, our paints, our brushes are used as a tool,” Tolokonnikova said. “I wanted to channel my anger into something more positive.”

Looking into the future, she hopes activists can understand who they are fighting for. When nobody is able to tell your truth, she said, it’s time for those people to speak out. In this day and age, a Youtube channel voicing your opinions or protesting on the streets of a small town can be more powerful than million-dollar media outlets.

“I am a deep believer that everyone is an artist,” Tolokonnikova said. “Looking into another person’s eyes is so meaningful.”

While being an activist, Tolokonnikova said she’s learned a lot about society. Barriers and gender norms she didn’t even realize she believed were slowly broken down within her own mind. It is important, in her opinion, for an activist to keep their mind growing and to never settle on one idea. Instead, they should grow and learn more about what they are fighting for and how to serve the topic better.

“Her activism is very different from what we see in the United States,” said Emma Cole, a CU student. “It is definitely inspiring.”