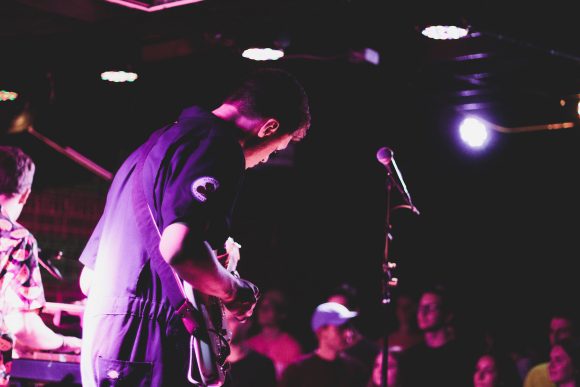 Audience members drifted in and out as the folk-rock band Lost Mondays played the opening set. Quick songs with fast percussion and a tambourine began to build energy. The guitarist’s tone was twangy, creating a western flair. The lead vocalist smiled and closed her eyes as she sang while the guitarist moved with the music. People chatted casually, tapping their feet and nodding their heads to the beat.

“Our first show was at a baby shower for a goat,” said bassist Kyle Loeffler. “So every show has been an improvement since.”

When Fresh Fruit! started setting up, a crowd accumulated at the base of the stage. They were welcomed by enthusiastic applause. Guitarist Mitchell Gardner sauntered out in patchy Dickies coveralls, casually tuning his instrument and preparing to play. Lead vocalist and keyboardist Ronan Dowling adjusted his watermelon button-up and confidently took his place.

“Who’s ready to dance tonight?” Dowling asked the crowd. He immediately transitioned into a groovy refrain. Drums and bass pulsed with syncopated rhythms, while the guitar interjected with a funky melody. They played like seasoned professionals despite the fact that the majority of their shows have been in casual settings.

“I would love for the band to one day be able to play at Red Rocks,” Dowling said. “That’s a huge goal.”

Before the creation of Fresh Fruit!, the three founders played together while studying at the University of Colorado Denver. Dowling, Gardner and Loeffler shared an interest in experimenting with elements of soul music. They combined various influences, ranging from Marvin Gaye to The Beatles, to produce their version of R&B.

“We each have our own lens and influence when it comes to music,” Dowling said. “But we have this agreed understanding for Fresh Fruit!”

“Another important thing about music is how it makes you feel,” Gardner said. “A lot of our music is upbeat and uplifting.”

Distorted bass progressions and psychedelic guitar riffs defined their style. They layered groovy melodies with various instruments, such as a maraca and cowbell, adding an exotic texture to harmonized cosmic sounds. Spacey synth established cool tranquility, which contrasted with a driving drum and wonky bass lines.

The transitions were seamless as the band alternated between hard-hitting beats and slow suspended notes. Midway through the show, Dowling sank into a shimmery lull as he sang, “I don’t believe her, I’m not doing so well/please remove me from this hell.” Audience members sang along, immersing in Dowling’s vulnerable lyrics.

Fresh Fruit! introduced their popular single “Let Loose” with stripped back instrumentals. The audience clapped along. The velvety melody reverberated in the small venue. Each musician showcased their talent with jam space in between lyrics. Dowling worked his way rapidly up and down the keyboard, creating a fantastic, dense improvisation. Gardner bent his strings on high notes, letting the noise resonate with weightless brilliance.

Dowling’s smooth, soulful vocals combined with Gardner’s electric rock chords for their final song, “Crazy Women.” Gardner performed a passionate solo, nailing every note and building energy to a peak. Every band member joined in for the final refrain, concluding the set with full force.

Fresh Fruit! currently has three singles available online, including on Spotify and Apple Music. They are currently working on an EP and plan to continue performing locally.