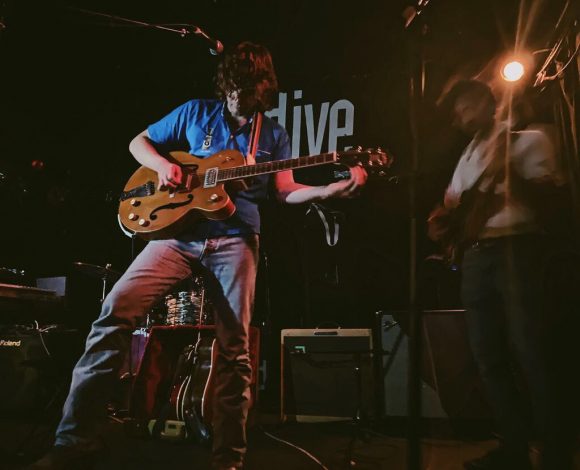 Minneapolis-based band Night Moves filled Denver’s Hi-Dive with pulsing psychedelic soft-rock on Wednesday, Sept. 11. A full house welcomed the band on the second night of their tour, backing their latest album “Can You Really Find Me?”

Indie-rock group Turvy Organ began the show, while a crowd began to form in the small venue. The band draws inspiration from Modest Mouse’s energetic, angsty style and has gained a similar following. Their opener set started the night with hard-hitting instrumentals.

“We both love Bob Dylan,” lead guitar and vocalist John Pelant told the CUI. “In high school, it was a lot of CSNY, Neil Young and The Rolling Stones.”

The Night Moves’ sound is difficult to define. Certain segments echo Americana elements, while others sound like pop. Pelant’s delicate, raspy voice and bright guitar tone create an atmosphere that he defined best.

“Whenever I’m at a family reunion, I describe us as space folk-rock, but cosmic twang-sludge is what I’d like to say,” Pelant said.

Alfano laughed, responding, “Cosmic is a good first word. No one understands that though. I dumb it down to 70s rock.”

Since high school, the two toured for a few years, continuing to develop their sound. In 2011, they released their first album “Colored Emotions” for free online. After gaining traction and signing to Domino Records, the band toured with two new members and released their second album “Pennied Days” in 2016.

Their latest album, “Can You Really Find Me?,” incorporates elements from both albums, alternating between funky riffs and soothing melodies. Western rock has always been essential to their sound, though they have experimented with newer elements.

“Can we get the lights a little lower?” Pelant said during the set, drawing the audience in closer and intensifying the intimacy of Hi-Dive’s close quarters.

Revisiting their first hit, Night Moves played “Headlights” to reenergize the crowd. The band then slowed it down again, shifting the show back to their earlier albums by playing “Colored Emotions” and “Carl Sagan.” Tranquility spread through the room, bringing the evening to a close with the velvety melody of the title track from their new album “Can You Really Find Me?”

Night Moves will continue their tour of the U.S., followed by a tour in Europe later this year. This will be their second time performing abroad and they are looking forward to establishing a bigger international presence.

“Last time, London was awesome,” Alfano said. “There wasn’t a show that was empty but it takes time.”

The band then hopes to take some time off in January to work on new music. Alfano said that they want to develop their sound even more while sticking to their roots.

“There haven’t been any major curveballs in our sound,” Alfano said. “We’re more confident now. It’s been a progression and we just have to keep progressing.”