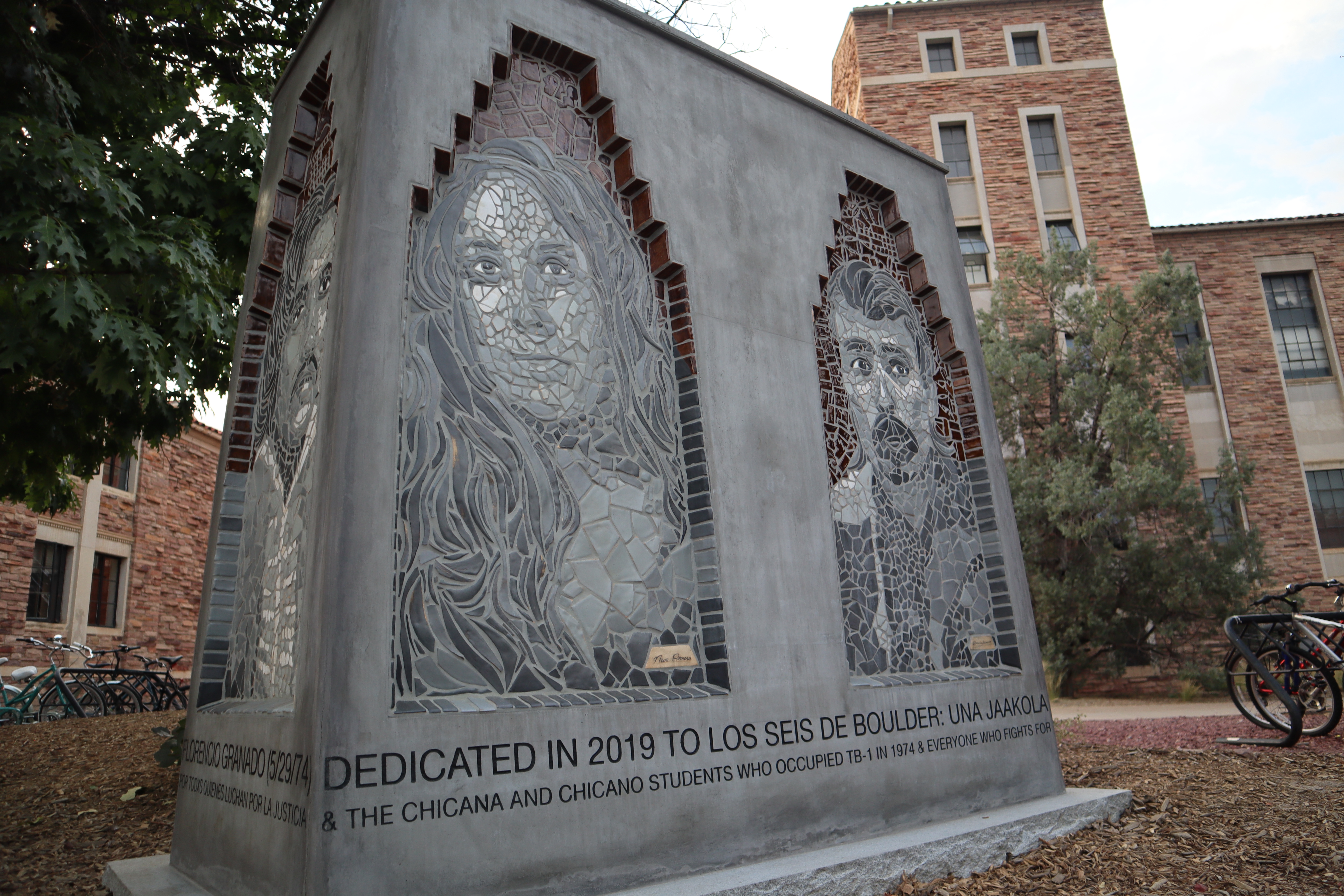 The sculpture in front of Temporary Building No. 1. Each mosaic is encircled with a text dedication to the members of Los Seis and Chicano students. Sept. 3, 2019 (Robert Tann/CU Independent)

At the University of Colorado Boulder, the story of Los Seis (The Six) seemed almost non-existent. There was little to commemorate the lives of the six Chicano activists who were killed in car bombings nearly 50 years ago. That was until CU Boulder master of fine arts student Jasmine Baetz decided that their history needed to be told.

The FBI files on the case were lost in a fire, and no one was ever charged for the deaths.

Now, CU has granted permission for the installation of a temporary memorial. The seven-foot-tall sculpture stands in front of Temporary Building No. 1, west of the Recreational Center. The sculpture’s murals depict the faces of Los Seis, with each mosaic encircled with a text dedication to the activists and Chicano students.

Baetz said even she was not aware of the tragic history until watching the documentary “Symbols of Resistance: Martyrs of the Chican@ Movement” on campus. After that, she decided to act.

“If I didn’t go into a (screening of the film) I would have graduated without knowing about the activism of this campus and a tragedy that deserves to be marked,” Baetz said.

Baetz worked with over 100 community members to make the sculpture a reality. She received funding through the Arts in Society Organization, the Boulder Arts Commission, Office for Outreach and Engagement, The Archive Transformed and a Beverly Sears Graduate Student grant.

CU’s campus has seen little in the way of remembrance. A mural of the students painted in 1987 was displayed in the University Memorial Center, but was later removed during the center’s renovation. Tucked away in Norlin Library at the base of stairwell 26 is another mural dedicated to Los Seis, though it gives no information regarding the deaths. For some CU students, the 1974 tragedy is news to them.

“I had noticed the memorial in front of Sewall Hall, but I didn’t know what it was for,” said CU senior James Bell.

Temporary Building No. 1, where the memorial stands, also holds important history for the Chicano community. In 1974, the building was occupied by Chicano students for 18 days as part of a protest against the university’s budget cuts to their financial aid. The funding was critical for Chicano students attending school through the Educational Opportunity Program. Los Seis died during the building’s occupation.

During the 1960s, students used the building as their meeting place for what was then the early days of the student group United Mexican American Students (UMAS).

“I would have graduated without knowing about the activism of this campus and a tragedy that deserves to be marked.”

But the memorial’s future is unknown as CU has not confirmed if the sculpture will be permanent.

“If the sculpture is removed from this location, it loses its charge and relevance,” Baetz said. “This was the building being occupied, which housed all of the educational opportunity programs in the 1960s. This is about placemaking.”

Lisa Schwartz, community program outreach advisor for the Office of Outreach and Engagement, said her office is in support of the sculpture staying in its current position.

“This collaborative public artwork addresses critical issues of racial equity,” Schwartz said. “(The sculpture is) of great importance (and) clearly signals CU Boulder’s respect for diverse communities on our campus and the collective and institutional willingness to make space for healing dialogue and genuine respect for differences.”

Baetz obtained a microgrant from the Office of Outreach and Engagement before beginning work on the piece.

UMAS y MEXA, a student coalition between the United Mexican American Students and Movimiento Estudiantil Chicanx de Aztlán, also back the permanent stature of the sculpture. Beginning nationally in the late 1960s and founded by some of Los Seis, UMAS became a student activism group centered around the promotion of equality and inclusion of Chicano and Latinx students.

“UMAS y MEXA is important on this campus because of its history,” said UMAS y MEXA Co-Chairman Mateo Vela. “It’s about building upon that legacy of activism that was established here in the 60s and 70s and making sure that Latinx and Chicanx students are being represented here on the CU Campus.”

UMAS y MEXA will formally dedicate the memorial Friday, Sept. 6. The event will start at 2 p.m. in front of Temporary Building No. 1 and will continue to the CASE auditorium to view a related exhibit and listen to guest speakers. “Symbols of Resistance” will also be shown.