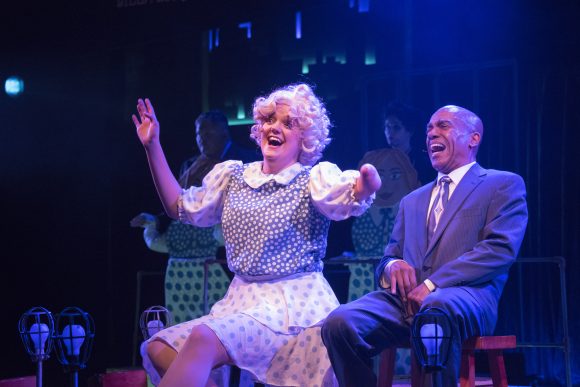 Smooth, silky jazz and sultry vocals filled an intimate theater in Denver’s Center for the Performing Arts. The glamour and glitz of 1920’s Chicago filled the stage. Actors emerged wearing sparkly, flapper dresses and sleek suits, dancing wildly and stumbling through the audience in a bubbly, drunken haze, belting at the top of their lungs.

The actors in “Chicago” had many different disabilities, including multiple sclerosis, Parkinson’s disease, cerebral palsy, blindness and autism. Each actor worked to make the rendition of “Chicago” a toe-tapping crowd-pleaser.

Originally written in 1926 and debuting on Broadway in 1975, “Chicago” continues to be engaging for a modern audience. Imagine Netflix’s hit show “Orange is the New Black” but set in 1920’s jazz-era Chicago. The plot follows multiple women in prison accused of murder as tabloids obsess over the sensationalism of their horrific crimes and dramatic trials. The show’s themes are as relevant today as they were then. Living in the era of Donald Trump, the media’s sensationalism is a trend we are all too familiar with.

The set was an immersive experience. A few chairs encircled the front of the stage’s catwalk, transforming the theater into a cabaret venue. Several tables with scarlet tablecloths and small candles were huddled near the stage for VIP audience members. The audience physically became a part of the show, as actors leaned over them, gesturing animatedly and singing.  One actor even flirted with an elderly woman, sitting in her lap and making her turn crimson with embarrassment.

Megan McGuire as Roxy Hart, one of the show’s lead characters, was comedic, brash and yet somehow endearing. Her character’s desire to be famous and climb the social ladder results in the murder of her lover when she is dumped. Her lack of remorse and narcissism throughout the trial should be off-putting, yet McGuire made Hart’s outrageous behavior hilarious. Her solos in “Funny Honey,” “We Both Reached for the Gun” and “Me and My Baby” showcased her seductive, smooth dancing and light, humorous vocals. McGuire has Asperger Syndrome and congenital limb loss.

Erin Schneider as Velma Kelly, the luscious cabaret dancer and violent murderer eclipsed by Hart, was a self-assured stage presence. Her dark, rich croon opened the show with “All that Jazz.” In “I Can’t Do It Alone” and “Class,” she showed off her vocals with loud, clear high notes and had fun with her craziness, never taking herself too seriously. Schneider has multiple sclerosis.

Leonard Barrett Jr. as Billy Flynn, the money-grubbing lawyer, had the confidence of a seasoned actor. His manner was easy and effortless as he concocted endless lies, all in the name of cash. Numbers like “All I Care About” and “Razzle Dazzle” showed off his booming, dynamic voice, ending with long, rapturous applause from the audience. Barrett also has multiple sclerosis.

Seeing talented actors with disabilities perform “Chicago” was inspirational and moving.  The audience was charmed,  falling in love with and rooting for all the characters, and at the end they gave a standing ovation.

PTC’s “Chicago” will be running at the Loft Theater at Denver’s Center for the Performing Arts until Aug. 25, 2019. Information can be found here: https://www.phamaly.org/chicago.