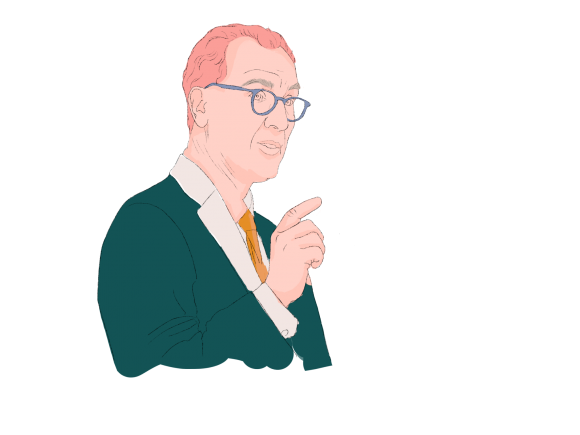 Illustration by Shiyue Zhang, special to the CU Independent

Mark Kennedy will receive an annual base salary of $650,000 at his new job as president of the University of Colorado, an 81% increase over his predecessor Bruce Benson. Kennedy was appointed as president on May 2, 2019, following a contentious period of student and faculty pushback.

Benson was paid $358,500 per year, which was considered below average for a university president’s salary. Benson was a multimillionaire before he came to CU, and he turned down multiple raises during his tenure.

Kennedy’s base salary at the University of North Dakota was $365,000. The president at the University of Central Florida, where Kennedy was a finalist to become president last year, receives a salary of $506,000. The salary increase for Kennedy was not a surprise to the Board of Regents, who were warned by outside consultants that they would have to provide a significant compensation package to meet market demand, according to the Daily Camera.

Kennedy’s contract states that the salary is “necessary for retaining Kennedy in light of prevailing market conditions and competitive employment practices in other states.”

After the first year, Kennedy’s base salary will increase to $850,000. Additionally, he will be eligible to receive up to $200,000 in incentives per year based on achieving specific performance objectives:

Kennedy is also eligible for other benefits along with the salary, including:

The contract was approved at the Board of Regents meeting on May 2. All the regents except Linda Shoemaker (D-Boulder) voted in favor of the contract.

Shoemaker said she believes the bonuses do not require Kennedy to put in work, and that they are essentially a $200,000 addition to his salary.

“It seems to me like the $200,000 in bonuses is structured so that there’s really very little requirement on him and any requirements will be decided by the Republican regents,” Shoemaker said.

While Shoemaker believes some ideas in the bonuses, such as boosting alumni involvement, are good, she said the language in the contract “lacks teeth.”

She also dislikes the three-year structure of the contract, as she believes the regents will attempt to have it roll over each year so that it is a three-year contract in perpetuity.

“Given all of the controversy and all of the problems that have been brought to light, we should not have given him so much money or such a long contract,” Shoemaker said.

The contract has been criticized by others as well.

“Lots of perks for Kennedy in this bad deal for Colorado,” Colorado Secretary of State Jena Griswold commented on Twitter.

“That’s 29 TA salaries in the first year, increasing to 38 TA salaries the second year, not including bonuses,” CU Boulder’s Committee on Rights and Compensation (CRC) tweeted about Kennedy’s salary.

The CRC is CU’s independent graduate student labor union. In a statement to the CU Independent, it criticized the disparity in Kennedy’s salary and the compensation graduate students receive.

“Our takeaway here is how little the university system values some of the essential labor that goes on at this and other campuses,” the statement read. “That CU is taking nearly 10% of our paychecks in student fees while offering Kennedy a quarter million dollars in bonuses for doing the bare elements of his job is simply astounding…To us, this disparity reflects an administration whose priorities are not the students and employees who keep CU running.”

The Denver Post editorial board also criticized the incentive structure in the contract.

“None of these things are bonus worthy accomplishments,” the board wrote. “They are boxes that can be checked off easily by anyone with even a semblance of delegation and time management skills.”

The Post criticized the contract for providing bonuses just for submitting plans and not for actually successfully meeting goals. It suggests instead providing bonuses for initiatives such as keeping tuition below inflation, increasing donations and alumni memberships and measurably making the campuses more diverse.

Kennedy will begin his tenure as CU president on July 1.