Tig Notaro kept students laughing during performance at the UMC 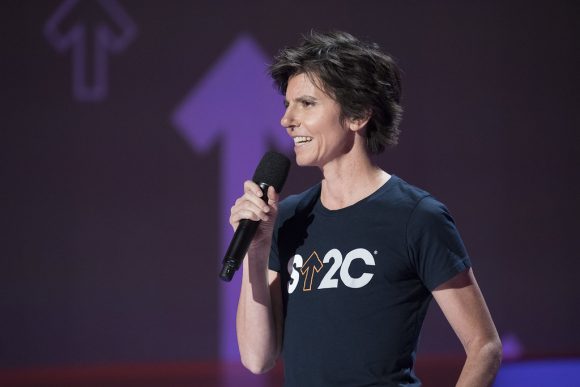 The audience enjoyed her set and laughed almost nonstop throughout the performance. CU student Allison Fether, who is a fan of Notaro, said she loved the show and enjoyed hearing new material.

“Tig Notaro has been my favorite comedian for a few years now, so when I saw she was coming to CU, I was so excited,” Fether said. “During several points in her set, I found myself crying from laughter. Her delivery is so perfect and funny.”

Since Notaro’s iconic tagline “Good Evening, Hello, I have cancer,” propelled her into stardom in 2012 and later a Grammy nomination, she has leaned into the success of her dark humor. During her set, Notaro drew from this usual repertoire, often joking about her medical problems. Cancer and numerous hospital visits aren’t funny, but Notaro found a way to make light of her personal pain.

I did not like many of Notaro’s jokes because I prefer short jokes with snappy punchlines. But, I can see why others found her funny. Although in my opinion her jokes are not high-caliber and don’t have clever puns, she does have a funny style of delivery. During her set, she was in no hurry and often waited for a beat after her delivery, completely straight-faced. Even if the joke wasn’t funny, the audience laughed at her deadpan expression.

Notaro’s comedy was authentic. Whether she was talking about her family, her numerous medical problems or being socially awkward, she was honest and open with the audience. She took her listeners into her real life and did not shy away from the pain or the difficult times.

She made her experiences, no matter how mundane or normal, funny for the audience.  She told a story about playing Dolly Parton’s “Two Doors Down” on repeat during a road trip with friends. For three minutes onstage, she silently bopped along to the beats and Parton’s peppy, nasal voice, motioning several times for the sound technician to turn it up. Many audience members leaned forward in their chairs, clasping their stomachs and wheezing from laughter.

The comedian can hold the crowd’s attention even during cringe-worthy moments. Some of her scenes could be from a failed middle school talent show and aren’t funny, such as her horrific piano playing and vocals for Adele’s “Hello.” But because she’s Tig Notaro, it seemed she could do no wrong, and the audience adored her.

Isabella Fincher is the assistant arts editor for the CU Independent. She is a sophomore majoring in journalism and classical guitar performance. She enjoys covering local arts and music events, especially classical music concerts. When she is not writing or practicing, Izzy is teaching yoga, walking her dog or listening to podcasts.