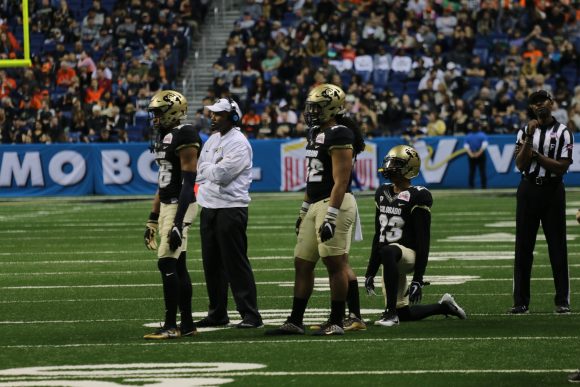 Then-interim defensive coordinator Joe Tumpkin and members of his defense react to a play late in the game on Dec. 29, 2016. (Justin Guerriero/CU Independent File)

On Thursday afternoon former Buffs assistant football coach Joe Tumpkin walked into a courtroom in Broomfield to hear the sentencing regarding his domestic violence case with former girlfriend Pamela Fine. The judge ordered Tumpkin to 30 days in jail and 30 months probation.

According to Daily Camera reporter Mitchell Byars, the judge will allow Tumpkin’s jail time to be work release, and gave Tumpkin a 10-day delay so he could arrange his work. Tumpkin did not comment on the sentence as he left the courtroom.

This case began when Fine alleged that Tumpkin assaulted her more than 100 times when they were dating from February 2015 to November 2016.

The accusations also sparked an investigation into how negligent the university was handling the allegations against Tumpkin.

When the investigation of the university was completed, university Chancellor Phil DiStefano was suspended for 10 days. Athletic Director Rick George and the then head coach of the football team Mike MacIntyre were both ordered to make a $100,000 contribution to a domestic-violence support organization.

But the negativity towards the university did not stop. Fine felt her claims against Tumpkin were not taken seriously by the university, and she attempted to file a lawsuit in the summer of 2017 against DiStefano, George, MacIntyre and CU President Bruce Benson. The case was dismissed July 2018.

In December of 2018 prosecutors saw enough evidence to lessen the sentence to one count of misdemanor assault and offered Tumpkin a plea deal. Tumpkin accepted the plea deal in February of this year.

At the sentencing, Fine and her family asked Judge Michael Goodbee for two years of jail. However, whether or not Tumpkin would serve time in jail was up to the discretion of the judge since jail time was not guaranteed in the plea deal.

“It’s just a really sad ending,” Fine said as she exited the hearing. “There were no winners, no losers. It’s just painful.”