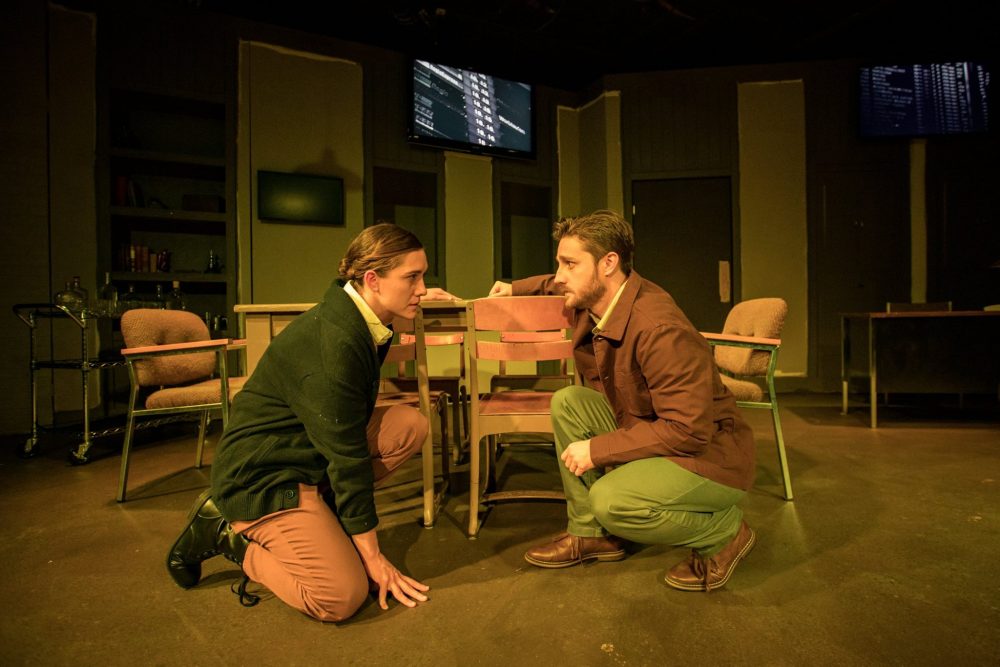 The Benchmark Theatre presented a dark and intriguing performance of Robert Icke and Duncan Macmillan’s adaptation of 1984. As I walked into the theater, my ticket was stamped with a bright red “1984“ and I signed a waiver. It warned me of lights, loud noises, nudity and the most shocking — depictions of torture.

Montages of historical events flashed as the lights went down on the set of 1984, staging the relevance of a book written 70 years ago to today’s audience. This book remains present in the minds of literary professionals, in classrooms and real-world politics. From the TV show Big Brother to the fear that the AI we put in our homes is sending information back to the government, George Orwell successfully convinced us that technology and control go hand-in-hand.

This script does not shy away from the harsh realities of Orwell’s dystopian world. The playwrights capture the essence of “Oceania,” the book’s setting, without overtly explaining it to the audience. Consequently, it allowed for the set, lighting and sound designers to play with how “Big Brother” makes his presence known. They used screens placed in different parts of the stage, often displaying different images. As a result, audience members felt as though they were missing something, adding an eerie tone of uncertainty. The gray set was cleverly plain, causing the monitors to stand out.

In addition to the visible set, there was a hidden room. The room acted as a safe room — meaning no screens. Ironically, the audience viewed the action occurring in the safe room through the monitors.

The performance, atmosphere and script came together to create an uncomfortable show. Watching this plot play out with real people makes the abstract literary discussions over themes of control, freedom, the power of language and individuality suddenly too personal. The experience of watching a person in front of you being tortured is unmatched by any conversation. Once the play ended, it left the audience visibly unsure of whether this dystopian government is already in existence and we are unaware, as the show creepily implied.

In this show, beauty comes from collaboration. The playwrights’ collaboration with technical designers, actors and the original text led to this magnificent, haunting piece of art. The space was intimate. It forced the audience to be a part of the story. During the torture scenes, Winston calls out to the audience for help. The onstage action radiated energy into the audience. The props may have been fake but the emotion was raw. My heart raced in fear and discomfort and it matched the fast-paced music that played in the scene transition afterward.

With dramas as potent as 1984, the most important theme is often difficult to pinpoint. However, this production revealed its choice fairly quickly through staging. The original book provides readers with commentary on control and authoritarian governments, in response to the atrocities of the second world war. This production chose most of the montage clips from the last 30 years.

It’s not a coincidence that the playwrights were inspired to adapt this play now. It’s no surprise why it has sat so uncomfortably with audiences from New York to Denver. The technology that Orwell only dreamed of is in our purses, in our pockets and on our counters. It’s talking back to us and tracking us. The Benchmark Theatre’s production of 1984 tells its audience to wake up. Big Brother is watching.