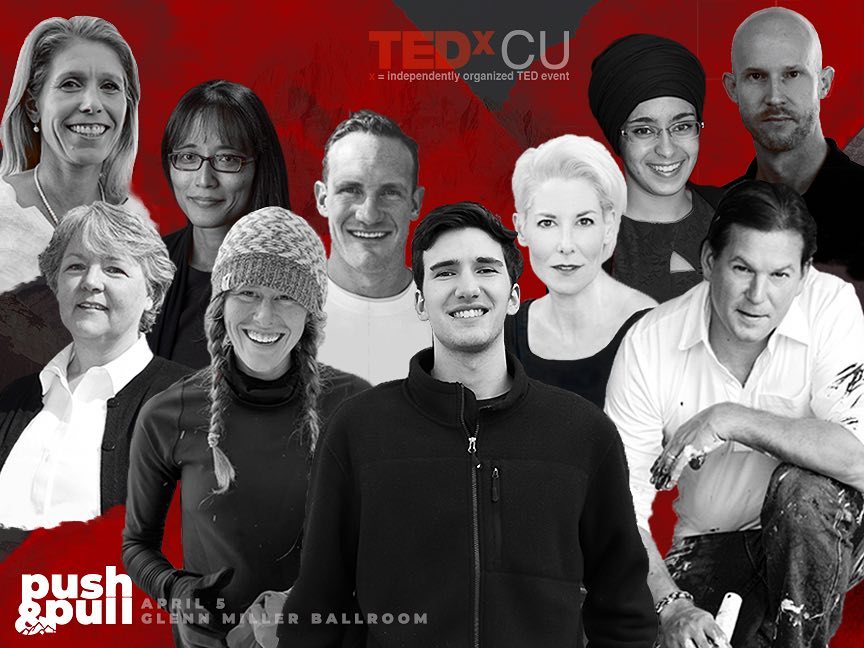 “Being in a school shooting changes you, the slam of a locker can take me back to it,” sophomore Brent Cary shared with the sold-out TEDxCU audience on Friday. A pin drop could be heard in the silent crowd as Cary vividly recounted his story of surviving a school shooting at Centennial High School in 2013.

Carey’s was one of ten talks and two performances at the 7th annual TEDxCU. Over 300 people attended the event, hosted at the University of Colorado Boulder. The talks centered around the theme of Push and Pull: pulling society towards an idea and pushing away societal norms.

Christina Hancock, the Director of Programming at TEDxCU, said CU often struggles to present different cultures — through the event, she said, “we can share in stories and cultures are all brought together.”

The TEDxCU team consists of students and community volunteers who prepare for the event throughout the school year.

Former CU student Patrick Devenny recounted his painful experience with bulimia nervosa and the stigmatized path he went down to receive help in his talk, “Males get eating disorders too”. Help, he said, does not always acknowledge that eating disorders are just as real for males as for females.

Devenny said men need to be included in the conversation about eating disorders. After his mother unexpectedly passed away, he began a harmful routine of not eating, going to the gym, binging, and then throwing up. It took a long time for him to acknowledge and understand he had a problem.

At the time, Devenny didn’t realize men could even have an eating disorder. Looking forward, Devenny hopes to start a conversation and aid in reducing stigmas around male eating disorders.

Freshman integrative physiology and computer science student, Maigh Kaur Jammu, shared how her Sikh faith prayer, ChardiKala, can be used to develop an action-oriented mindset in her talk, “Turing inaction to action”.

As a child, Jammu was bullied for wearing a turban. In middle school, she said, “some boys called me ‘towel-head’ or a terrorist.” Through applying the mindset of ChardiKala, Jammu was better able to confront uncomfortable situations — she had to first examine that the problem exists, acknowledge her feelings, accept reality, then take action to stand up for herself.

Though she didn’t understand this concept at the time, Jammu challenged the audience to use ChardiKala to take action against adversity in their lives.

CU student and gun control advocate Brent Cary shared how a shooting at his high school affected his life in his talk, “My school knew there was going to be a shooting and did nothing.”

“This is a problem that is uniquely American,” Cary said. Cary held that society must address underlying mental health issues so that no one feels the need to bring a gun to school. His own school had many signs that a shooting was going to happen, from the students making deaths threats to the shooter doing research on purchasing guns.

According to Cary, teachers and administrators need to be better trained to identify and address these issues. He went on to say that the CU administration needs to take more concrete steps to ensure safety on campus. Gun reform is a must for Cary, “to prevent the risk students take by going to school each day”.

As a former world champion sky runner, Hillary Allen runs up very steep and dangerous terrain. In one run, all her hard work came tumbling down in the last stretch of her race when she fell 150 feet off of a mountain peak and broke 14 bones.

In her talk, “You can challenge the impossible”, Allen shared her journey to recovery. The most impactful thing, she said, was that “learning what the human spirit is capable of is incredible”.

Once told she would never walk again, just ten months later she ran and won a race in Italy. For Allen, “running is limitless.” She challenged the audience to do hard things and challenge the impossible.

Six other speakers spoke on a variety of topics, including how improv comedy can make you more present, how journalism can be used to be a more informed voter and how to elicit empathy through documentary photography.

Cary said that TEDxCU gave him a platform to share something he cares deeply about.

“My thought was that I have been put in a position to give a speech about something that not a lot of people have experience with, and that I could do something to really start some discussion,” Cary said.

The recorded talks from the night can soon be found at tedxcu.com.