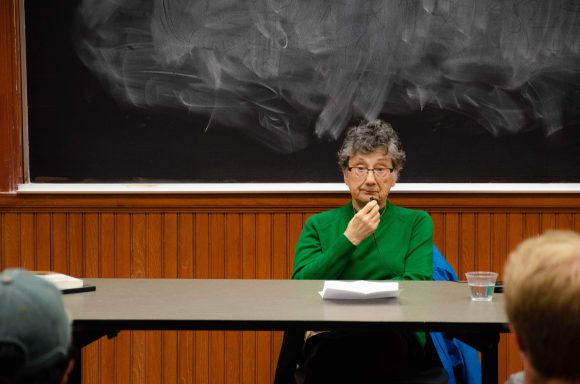 Maria Krenz tells about how she only started letting people know she is a Jew long after the war ended. (Hunter Allen / CU Independent).

Beginning on Tuesday, the University of Colorado Boulder hosted a variety of events and panels to observe Holocaust Remembrance Week.

On Wednesday evening, Maria Krenz gave an emotionally charged talk to a full audience in room 230 of the Hale Science Building, entitled “The Holocaust in Hungary: Maria’s Story.”

Krenz, author of Made in Hungary: A Life Forged by History, was born in Budapest during an Allied bombing run on April 24, 1944.

By that time, World War II had been raging for nearly five years, with the majority of mainland Europe consumed into the Nazis’ sphere of influence. The Jewish populations of France, Poland, the Baltic states and Russia, among other nations, had already been subjected to the Holocaust, with millions having been shipped to extermination camps and the same fate awaiting millions more.

Hungary was spared the brunt of that horror for the majority of the war due to its membership within the Axis powers. However, by early 1944 the Hungarian government, steadily becoming more and more cognizant of the impending defeat of Nazi Germany, sought to negotiate with the Allies.

In light of this, Hitler ordered the invasion and occupation of the country that March. But make no mistake — the Nazi occupation was far from the start of persecution and violence against Jews in Hungary.

“The Jews were hated and vilified for many years before the Holocaust started,” Krenz said.

Anti-Jewish laws in Hungary included banning them from attending college and  forbidding intermarriage with non-Jews. The Arrow Cross Party, a far-right, fascist political group in Hungary with roots dating to the aftermath of World War I, had 300,000 members by 1939.

Politically speaking, it was in power in Hungary from Oct. 1944 to March 1945, overseeing the deportation of over 80,000 people to concentration camps. In total, over 500,000 Hungarian Jews perished as result of Hitler’s Final Solution.

By the time Krenz was a few months old, the consolidation of Jews into “Yellow Star Houses” was in full swing.

Luckily for Krenz, her parents, in an effort to shield themselves from discrimination and violence, converted to Catholicism earlier in the war. Their condition was further aided by Krenz’s aunt, who married an Aryan non-convert Catholic man. Krenz described her parents as “assimilated Jews” that weren’t overtly religion, which likely aided in their conversion to Catholicism.

“If you convert[ed] to Catholicism and you marr[ied] an Aryan Catholic … then you were safe,” Krenz said.

Those two factors very well may have saved all three of their lives.

It didn’t take long for Krenz’s parents to understand what the “Yellow Star Houses” really were — collection points for Jews to eventually be shipped off to concentration camps.

Krenz’s aunt helped the family relocate to a better living situation, offering her own apartment, although secrecy of who they were was still paramount. Krenz’s aunt lived on the top floor of a six story building — a reality that was far from comforting during Allied bombing raids.

Unfortunately for Krenz, someone must have heard them, or worse — intentionally informed authorities of their presence. Shortly thereafter, the apartment was searched by three Arrow Cross “thugs.”

Krenz’s father presented them with documentation proving their conversion to Catholicism and in an immense stroke of luck, the thugs, who were illiterate, didn’t know what to make of the paperwork and left the premises. Her parents decided not to risk another encounter, because “if they came once, they’d come again,” as Krenz put it.

From there, the family hid out in a damp cellar with many others, where food was short and hope began to fade, along with young Maria’s health. But in February 1945, the Soviets liberated Budapest, and with them came the Red Cross, which provided Krenz’s parents with baby formula, likely saving her life.

In total, Krenz lost 38 family members in the Holocaust, including an aunt and uncle in Vienna, who committed suicide when the Nazis annexed Austria in early 1938.

Krenz said that her father, who died in 1950, stopped her mother from doing the same, when she tried to put her head inside of an oven.

“[People] naively believed that communism thinks that everybody is equal,” Krenz said. “At first, [the Soviets] were a godsend, because they liberated us … [but] we never knew they were going to stay. In 1948, they had a rigged election and the Hungarian Communists and Soviets took over, and then the real terror came.”

Krenz and her mother fled Hungary in 1957, eventually settling in Venezuela, where she stayed for seven years before relocating to New York City in 1964.

But even 12 years removed from the end of the war, and now in Venezuela, “anti-Semitism continued” while the memories of the war and Holocaust still weighed heavily on them both, especially her mother.

“My mother’s fear was constant and hysteric,” she said. “She never recovered from [those] years … She relived it, telling me every single little detail. It was scary because her eyes became like they weren’t seeing me, like they were in the distance somewhere.”

Krenz eventually moved to Boulder in 1968 to take classes at the University of Colorado, still dealing with the trauma of the past.

“I was 27 years old and living in Boulder, Colorado, before I dared to tell a non-Jew that I was Jewish,” she said.

From the first word out of her mouth to when she finished her talk, Krenz spoke to the audience from a position of deep care and a simple necessity to tell of her experiences.

“All Holocaust survivors have to tell our stories before we are all too old and die,” she said after wrapping up her panel.

When all was said and done, and Krenz had completed an impromptu meet and greet with audience members, admirers of her talk and members of the Jewish faith, alike, she was approached by one final person; one final member of the audience had stuck around to ask a quick but sincere question.

“Do you still believe in God?” Krenz was asked.

“If I didn’t believe in God, I would have to believe in humanity,” she replied without hesitation.