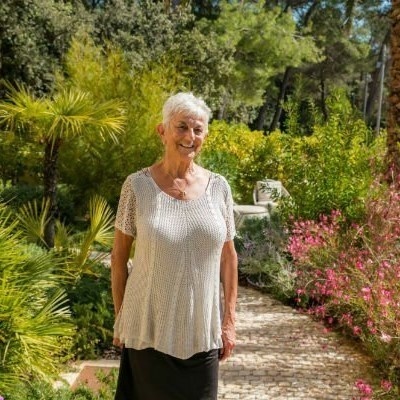 By 1938, the plight of Jews in Nazi Germany had become an international issue, though not for reasons of humanitarian concern or value for human life or dignity.

When President Franklin Delano Roosevelt initiated the Evian Conference in the summer of 1938, held at Évian-les-Bains, France, representatives from 32 countries attended not to address the intensified persecution of Germany’s Jews, but to figure out who and what countries would be willing to accept the thousands of Jews applying for asylum and citizenship in a desperate attempt to leave Germany. Many fled Germany with little to nothing and all of them knew what awaited them in the event that they were forced to return home.

Barbara Steinmetz told the story of her family’s harrowing escape from mainland Europe during the early years of World War II in the final event of Holocaust Remembrance Week on campus at CU Thursday evening.

Steinmetz was born in Hungary on Nov. 26, 1936. Her parents ran a hotel on the island of Lussinpiccolo, off the coast of Croatia in the Adriatic Sea, which at the time belonged to Italy. Today, the island is known as Mali Lošinj.

“I lived an idyllic childhood on the banks of the Adriatic,” Steinmetz remembered fondly.

By all indications, her parents’ hotel was a flourishing operation and she and her older sister were born into a comfortable existence.

However, by the time of the Évian Conference, storm clouds were gathering. Mainland Europe was a calendar year and some change away from the horrors of World War II. Countless Jews across Europe — mainly in Germany — knew the clock was ticking before they’d be unable to leave the danger zone.

Italian dictator Benito Mussolini stripped the Italian Jews of their citizenship in 1938 while forbidding them to hold positions in government and in certain professions.

By 1940, Steinmetz’s father decided that enough was enough and took the family back to Hungary, where they tried desperately to convince other family members to leave the country.

“My dad encouraged the rest of my family to leave,” Steinmetz said. “They were scared — they simply couldn’t envision what was to come…or that their friends [and] customers would turn on them.”

Steinmetz, her sister and parents left Hungary for good in 1940, settling in Nice, France. That summer, France was overrun by the Germans, formally surrendering July 25.

Soon, the government of Vichy France, in which the city of Nice’s jurisdiction fell under, began fully collaborating with the Nazis, aiding in the carrying out of the Final Solution.

The winter of 1940-41 saw the Steinmetz family flee again by train to Barcelona, then Madrid and finally to Lisbon, Portugal, where thousands of other refugees were desperately trying to leave the continent.

Of the 32 countries that sent representatives to the Évian Conference, only one agreed to accept further Jewish refugees: the Dominican Republic, which was ruled at the time by dictator Rafael Trujillo.

“[Every country] had excuses for not taking Jews,” Steinmetz said. “The conference confirmed to Hitler that no one wanted Jews…virtually all participants said ‘yes, we sympathize, but no, we will take no more.'”

Steinmetz said that Trujillo was compelled to accept Jewish refugees partly because his daughter, who in the 1930s was attending a prestigious boarding school in France and who’d struggled to make friends there, was befriended by the daughter of a German Jewish industrialist.

All replied with rejections, some of which letters Steinmetz presented to the crowd in room 230 of the Hale Science Building during her talk.

“The letters I have validate these countries’ roles in collaborating with the Nazis,” she said.

The Dominican Republic was accepting Jewish refugees at the time, although not out of the goodness of its government’s hearts. Rather, Trujillo wanted agricultural workers and he saw European Jews as good candidates for labor. Plus, he wanted to “whiten” the country, as Steinmetz put it.

In 1937, Trujillo presided over the massacre of between 15,000-30,000 Haitians living in the Dominican Republic; it was in the aftermath of this bloodbath (and decimation of agricultural workers) that Trujillo sought replacements.

Miraculously, Steinmetz’s father was able to book passage on the Portuguese cargo liner, the S.S. Nyassa, to the Dominican Republic.

The ship and its refugees onboard docked at Ellis Island in New York Bay, as the Dominican Republic did not have a sufficient immigration inspection station, arriving on July 13, 1941.

Steinmetz recalled the skyscrapers of Manhattan serving as a painful reminder of the country that had refused to admit Jews in their time of greatest need.

Shortly thereafter, the family arrived in the Dominican Republic, settling in the town on Sosúa. The settlers got to work quickly, but were plagued by mosquitos carrying malaria and a surplus of tarantulas, not to mention the hard labor.

Established in Sosúa, Steinmetz’s parents arranged for them to attend a Catholic boarding school, with a few strings attached. The Mother Superior of the school was the only one to know their true identities and that they were Jewish — for all intents and purposes, the girls had to appear Catholic, while taking part in religious ceremonies and prayer.

“For four years, the convent was our home,” Steinmetz recalled. “Although formidable, the sisters were kind.”

Many of the Jewish refugees’ contributions to Sosúa still stand today, including a school and dairy factory. Some descendants still remain there and to this day operate a synagogue.

The Steinmetz family eventually made it to the United State after being aided in securing visas by a fellow Hungarian immigrant that had settled in Boston. Her parents went to work at hotels in New Hampshire, while Steinmetz and her sister were sent to summer camps.

She recalled an experience with her father when she told him she was “unhappy” living in New York.

It was an experience that helped open her eyes to how difficult life had been on her parents, in fleeing the Holocaust and later in life, as they did their best to provide for Steinmetz and her older sister.

“My parents took menial jobs and worked hard,” she said. “They died young and their lives were a struggle.”

Steinmetz herself eventually found her way to Boulder in the mid-2000s, where she lives currently. She ended her engagement by reading the following: “Silence in the enemy. Indifference validates the perpetrator. Your actions, civility and behavior changes the narrative.”

“I tell Holocaust survivors that their testimony is imperative,” she concluded.