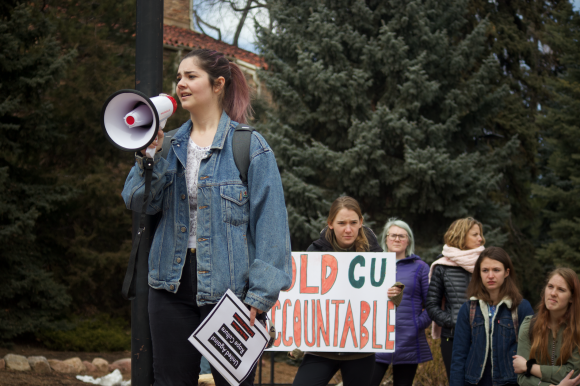 A preliminary hearing for a CU student accused of rape has been delayed from today until May 3, according to the Daily Camera.

Zachary Roper, a sophomore from Erie, Colorado, was arrested in March after being accused of sexually assaulting a fellow CU student after a sorority event in January, and was charged with two felony counts of rape. He had a preliminary hearing scheduled for April 4 but it has been rescheduled, according to the Camera. Roper is currently out on bond.

Recently, a group of students on campus have formed the Expel Abusers campaign that is seeking to change how CU handles accusations of campus sexual assault. The group published a petition this week with seven demands for the university which are as follows:

As of the time of this publication the petition has over 500 signatures.

“I’m signing because CU is complicit with rape and rape culture,” read one comment left on the petition’s website page. “The following steps must be taken to ensure the safety of the students.”

“If a student is found responsible, sanctions for sexual misconduct may include suspension or expulsion, depending on the severity of the case,” university spokesperson Deborah Mendez-Wilson said in a statement. “We remain committed both to individual and community safety and will continue to provide numerous support services for sexual assault victims. We encourage students to contact the Office of Victim Assistance (OVA) to discuss medical and reporting options in a supportive, confidential setting.”

Roper’s case is currently being investigated through the university’s Office of Institutional Equity and Compliance.

The petition’s sixth request includes asking the university to hire a full-time Sexual Assault Nurse Examiner (SANE), a nurse practitioner that has been certified to be able to conduct evidentiary exams for sexual assault victims. Wardenburg does not currently have a SANE on staff.

Title IX laws are currently in flux, as Secretary of Education Betsy DeVos is pursuing changes to how campus sexual assault will be handled by public universities. Title IX changes may hinder the proposals put forward in the petition such as its fourth request, which asks CU to address off-campus assault. Under DeVos’ changes, the university would not be liable to assaults off-campus. CU states it will follow the new federal standards once they are finalized and announced.

“In 2011, the Department of Education’s Office for Civil Rights extended Title IX protections to include threats and realities of sexual harassment and assault,” the Expel Abusers petition reads. “We realize that Secretary of Education Betsy DeVos does not share this commitment to victims and potential victims of sexual violence on college campuses, and we implore CU Boulder to proactively demonstrate its concern for the safety of all students by taking a firm stand to protect and improve upon our federal Title IX rights.”