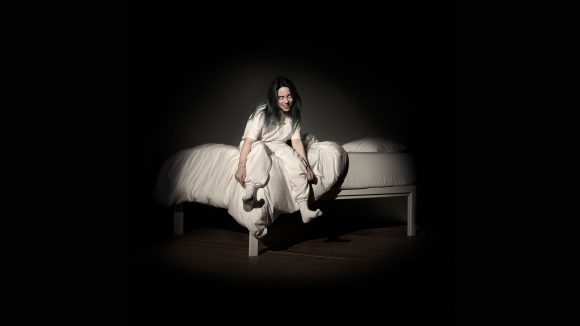 “When We Fall Asleep, Where Do We Go?” album cover. Photo courtesy of Billie Eilish

The debut album “When We All Fall Asleep, Where Do We Go?” by Billie Eilish is a pop hit. She is on track to be at the top of the US and UK charts next week according to Billboard—not bad for a 17-year-old.

Eilish’s image and music is reminiscent of Halsey during her “Badlands” era from her long, pastel-blue hair to her trippy electronic effects and dark lyrics. Yet, Eilish brings her own twist to Halsey’s style music. She combines the vocal styles of Lana Del Rey, Lorde and Ellie Goulding with the vibes of Fiona Apple.

The album’s aesthetic and sound is epically casual. I feel I am sitting in Eilish’s living room listening to her sing with only a mixer, a few effects pedals and her brother singing backup vocals.

In the cringey first track “!!!!!!!,” which is only 14 seconds long , Eilish pulls off her dental braces with a slurping sound, giggles into the microphone and introduces the album as if her listeners are old friends hanging out with her in the studio.

The rest of the album is equally unfiltered and raw. It seems Eilish did not believe any musical experiment was too strange for her album. She sings a duet with a young child who adorably lisps her words in “8”,  included samples clips from “The Office” and “My Strange Addiction” and named a song “Ilomilo” after a Microsoft video game.

Eilish’s voice alone is enough for many tracks with only a chill beat and a few chords in the background. Her delicate voice shines through on the lighter songs, especially “When the Party’s Over,” as it did in her 2016 hit “Ocean Eyes.” For her, less is more, but she can still hold her own in the denser tracks.

Her authentic lyrics are refreshing. In “Wish You Were Gay,” she jokes that if her crush were gay, it would “spare“ her pride. It’s something few would dare say out loud, but Eilish does not shy away from her feelings—even with the Twitter backlash criticizing her for “queer baiting.” She later refuses to lie to herself about how she feels  in “When the Party’s Over.” She owns up to her desire and heartbreak as black tears run down her beautiful, pale face in a Spotify looping video.

Eilish shows her darker side in other Spotify looping videos. In “You Should See Me in a Crown,” a huge, hairy tarantula climbs out of her pink glossy lips and climbs around her face. She croons “I wanna end me” in “Bury a Friend” over an upbeat rhythm and funky effects, while a shaky camera pans towards a ghost-like figure surrounded by flickering lights. It’s strange and incongruous, but she makes it work.

Eilish adds her own unexpected twist to the album’s last track as well. The final song is “Goodbye,” which includes backwards lyric compilations from each of the previous songs.

She always finds a way to be unique and surprising up until the very last moment. This unique trademark will keep us coming back for more.