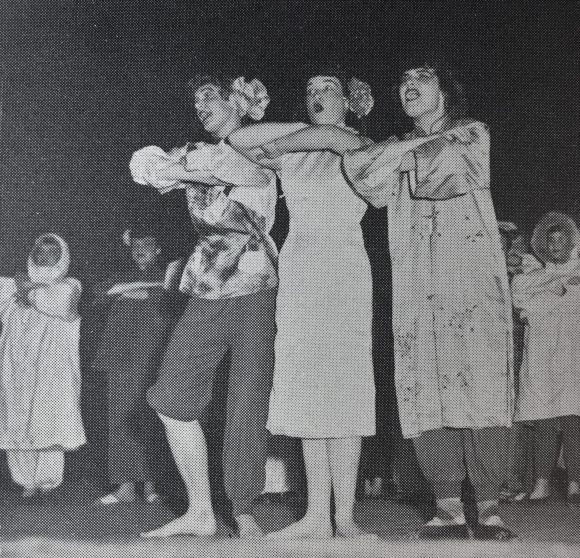 In its recent investigation of other yearbook volumes, the CU Independent discovered photos in a 1953 edition of the Coloradan, CU’s former yearbook, of three members of the Associated Women Students seen performing in yellowface for a show titled “Tea-time in Tibet.” Yellowface refers to racist tropes and stereotypes of Asian people that are largely perpetuated by white actors and artists. The female students appeared in stereotypically pan-Asian costumes, wearing face makeup and performing in a racially stereotypical style.

Joey Wong, conference chair of CU’s Midwest Asian American Student Union (MAASU), spoke to the CU Independent about the resurgence of the photos, saying it is important to remember CU’s history.

“Within the Asian community, we don’t speak up as much and we do sometimes let it slide by,” Wong said. “Being able to bring these topics back up to tell people ‘hey, this is still not acceptable’ is important.”

Incidents like these are not limited to the past or just to CU. College campuses across the country have discovered blackface and similar racist displays in their yearbooks as well. In 2011, the CU Boulder Faculty Assembly drafted a resolution condemning CU students wearing blackface during Halloween. George Washington University, in Washington, D.C., found several of photos of alumni wearing blackface in the college’s previous yearbooks. The Baltimore Sun also found blackface photos from a fraternity minstrel show on the University of Maryland campus.

While Wong acknowledges that CU “has changed a lot” he believes the university should strive for more inclusivity in its student body.

MAASU describes itself as being created “in response to a need for support, political unity and activism among Asian American students in the Midwest.” Recently, the organization hosted the first MAASU conference at CU Boulder, an event which takes place annually at different college campuses around the Midwest.

Wong says CU’s initial lack of support for the conference was emblematic of the inclusive struggles the Asian community faces at CU today.

“I feel like at CU, or just in Colorado in general, we don’t have that type of support or organization that Asians could go towards,” Wong said.

When it was announced that CU’s MAASU chapter would hold the conference, it was an uphill push for Wong and the organization to gain sufficient financial support. Wong says that when the group initially asked the Center for Student Involvement (CSI) for a budget to host what would be the largest leadership conference for Asian Americans in Colorado, the group was “brushed off.”

CSI told Wong that student regulation fees did not apply to the MAASU event since many who were coming were not necessarily CU students. While Wong says he understands CSI’s reasoning, he says other universities that have hosted MAASU have been more enthusiastic in helping the Asian American community than CU.

“It was honestly quite disappointing,” Wong said. “Our first budget request took four months to go through.”

Wong considers the conference highly valuable in furthering inclusion for Asian American students within the campus community. With a budget up in the air, Wong says that MAASU struggled to market the conference effectively to students.

“I feel like the university’s almost against us in a way,” Wong said. “I’m hoping that CU realizes that.”

Wong says that CU is not done progressing inclusivity, even though its offensive yearbooks may be in the past.

“Fortunately CU doesn’t do that anymore,” Wong said. “But the next step for that is to really help these students be a part of the campus and frankly that hasn’t happened yet.”