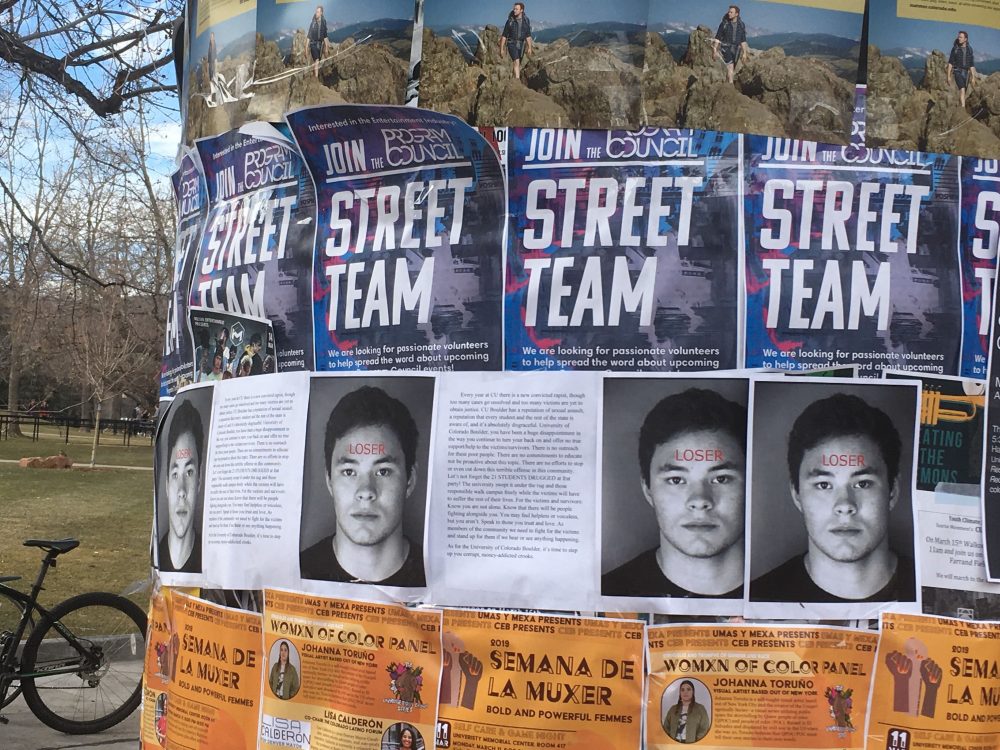 Update 3/17/19: this story has been updated to clarify Roper’s fraternity status and to add a comment from a university spokesperson.

A University of Colorado student was arrested after reportedly raping a female student after a sorority event on Jan. 31.

Zachary Orion Roper, a 19-year-old CU student, was arrested on March 11 and had a bond hearing later that day. He was given a class 4 felony charge of sexual assault. The incident was first reported by the Boulder Daily Camera.

The woman stated she did not remember much of the evening after leaving Roper’s apartment. Reportedly, members of the sorority executive board decided to send her home from the event for being too inebriated, and that the sorority policy is to send members home in an Uber with their dates if they are too drunk.

An Uber was ordered with the address of the sorority house, but during the ride, Roper changed the address to his apartment. The Uber driver who drove them told police that they were both clearly intoxicated and that the woman was passed out for most of the ride. He said that the woman only said a few words during the ride and needed to be woken up and given assistance leaving the car and walking at the end of the ride.

A sorority member who was at the sorority house was contacted by one of the executive members and told to keep a lookout for the woman and Roper, who the affidavit reported her being told was “kind of creepy.” When the two did not arrive at the expected time, the sorority member became worried and asked other people at the house if they knew where she might be. Roper’s roommate was at the house and said he was concerned that Roper may have taken her back to their apartment.

Roper’s roommate went with the sorority member and two other members to the apartment, where they entered Roper’s room and saw him sexually assaulting the woman, who appeared to be unresponsive. They got her out of the apartment and took her to the hospital to receive a sexual assault examination.

Roper received a ticket for a fraudulent ID last year, his only other criminal history. A CU database lists him as a history student.

According to the affidavit, Roper told the Uber driver that he was in a fraternity. However, Marc Stine, CU’s Greek advocate for the Interfraternity Council, said that Roper is not a member of any of the 22 fraternities affiliated with the IFC. Roper registered to rush this fall as a sophomore but was not offered a bid by any of the fraternities. It is not known at this time whether he is a member of one of the three fraternities that are registered student organizations, or Kappa Sigma or Sigma Pi, which are not affiliated with the IFC or CU.

University representatives have yet to respond to questions from the CUI about the incident, but Melanie Parra, a spokesperson for the university, told the Daily Camera that the university “is investigating the allegations that were reported.”

Update: over the weekend university spokesperson Deborah Mendez-Wilson said that CU is investigating the case and that possible sanctions could include suspension or expulsion.

Carson Hodges, co-director of this year’s student production of “The Vagina Monologues” and one of the organizers of last semester’s protest of the university’s handling of sexual assaults, was disturbed by the incident.

“Greek life is a toxic environment,” Hodges said, referencing statistics that women in sororities face an increased risk of sexual assault and that fraternity members are more likely to commit sexual assault. “Although this [case] is a big deal, this has been happening to so many girls so often.”

She said that she hopes Roper is expelled from CU and that the university takes steps to address the situation, though she said she does not have high expectations for how they will respond.

An anonymously-posted sign referencing the incident was seen in Norlin Quad on Tuesday. The sign featured Roper’s mugshot with the word “loser” superimposed on the image and a page of text criticizing CU’s handling of sexual assault cases.

“CU Boulder has a reputation of sexual assault, a reputation that every student and the rest of the state is aware of, and it’s absolutely disgraceful,” the sign read.

A protest at the UMC on campus is scheduled for Monday, March 18, according to a Facebook event.

“We are rallying on Monday at the UMC fountains to demand that the University suspend the student until his trial and expel him if found guilty,” the post said.

This is a developing story and will continue to be reported on by the CUI.