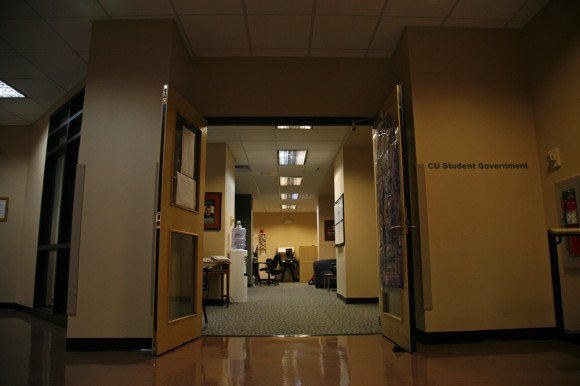 On Thursday night, CU Student Government’s Legislative Council discussed impending changes to how student fees are managed. Thursday night’s discussion, which was added to the agenda at the beginning of the meeting, indicated that efforts to innovate CUSG’s budgeting process are far from finished.

The CU Independent obtained a draft of the document that outlines an overhaul of the current process of budgeting. The Student Fee Budget Proposal, as it’s called, attempts to give CUSG and students a “meaningful presence” in the management of student fees. The proposal is just a draft at this point and may go through sizeable changes before it’s finalized.

Jake Reagan, one of CUSG’s tri-executives, has been a main player in the discussions with CU administration. He said that the proposal would give more student input on all student fees, not just the ones that are currently managed by CUSG’s budgeting process. It would also make CU administration’s budgeting process easier by shifting the timeline to begin much earlier. Currently, Legislative Council considers budgets at the end of February and beginning of March, making it one of the last budgeting processes on campus to be finalized. Reagan said that discussions have required an open mind and good faith from all sides of the table.

“There have been longstanding tensions between CUSG and student affairs, and that’s pretty normal across most universities,” Reagan said in an interview. “This process has been an exercise in how we can overcome that to the benefit of all students, because it’s not to the benefit of all students that we have our budget taken away and students don’t have a say in the process.”

Legislative Council, which includes Representative Council and Council of Colleges and Schools, expressed mixed feelings about both the proposal and the manner in which it’s been pursued. Michael Robinson, Representative Council speaker, said that he felt frustrated at a lack of transparency and communication throughout the process, both from CUSG leaders and from CU administration. Though the Student Fee Budget Proposal outlines a process that has occurred throughout this current school year, little information has been provided to the public or to Legislative Council.

“In its current state, no I do not support it, but there is still time for it to change,” Robinson said in an email to CUI.

Maddie Gile, Representative Council vice speaker, said she was generally in favor of the proposal as it is, citing its inclusion of more student voice in the budgeting process, though she expressed concern at the shift of responsibility away from the elected members of Legislative Council.

“I feel really confident in my colleagues that we know how these cost centers work and what our students might want,” Gile said in an email to CUI. “I am excited to have more discussion with the executives and administration to see if we can collaborate on something that satisfies the chancellor, CUSG and the students.”

Currently, Legislative Council oversees the annual budgeting process for CUSG’s cost centers and is the last stop for a budget before it’s sent to Student Affairs and the Board of Regents. Representative Council members, who are elected semesterly by the student body, also sit as liaisons on the Joint Boards of CUSG’s cost centers.

The Student Fee Budget Proposal would get rid of Finance Board, which currently reviews the budgets of cost centers, the campus entities funded primarily by CUSG. In the current system, after Finance Board sees a budget, Legislative Council approves or modifies it.

The Student Fee Budget Proposal had previously been brought up unofficially to Legislative Council at its Feb. 21 meeting. According to documents obtained by CUI, it was discussed in a way that was not technically part of the agenda, either officially before the meeting began or as an amendment added during the meeting. There were some changes made between the Feb. 21 version and the version discussed on Thursday night, but the main points remained similar.

A culmination of conflict

The proposal comes as a result of conflict between CUSG and administration on how to deal with student fee oversight. In April 2018, CU administration threatened to take away over 90 percent of CUSG’s budget of about $24 million. Collectively known as the Student Fee Package, and shown on students’ tuition and fee bills as the “student activity fee,” this portion of student fees goes towards CUSG cost centers such as Radio 1190 and the University Memorial Center. For the 2018-2019 year, each student paid $288.

That’s still less than half of all student fees collected. The majority of student fees, until this year, have been overseen by CU administration. Some were implemented in previous years through ballot referenda, such as the Rec Center expansion fee, or advocated for by CUSG, then reorganized under a different CU office with or without CUSG’s support.

“If we want to maximize student voice, that would have us voting on budgets as a student body and that would have huge drawbacks,” said Konrad Schreier, Law School senator, in an email to CUI. “Conversely, if we wanted efficiency we could just give it to a committee with no oversight, but that would be bad as well. So this bill just seeks to find a balance of keeping student voice where it is valuable and efficiency where it is needed.”

In the wake of attempts to defund CUSG, in May 2018 Chancellor Phil DiStefano requested CUSG leadership — mainly the tri-executives and Legislative Council president — to work with CU administration and campus stakeholders to innovate CUSG’s budgeting process. The steps moving forward are a bit unclear. Reagan said that one option is a resolution from Legislative Council to support the proposal. There could also be a bill, but Reagan said a bill might pose additional problems. Regardless, the new process will involve significant changes to the CUSG Constitution, which have to be voted on by students. This will likely occur with the upcoming spring election.

Editor’s note: As of this story’s publishing, no Legislative Council meeting minutes past the first meeting of the 89th session have been posted on CUSG’s website. Documents aren’t considered available for public scrutiny until after being finalized, hence why there is no draft version of the Student Fee Budget Proposal on CUSG’s website and why CU Independent is refraining from posting the draft of the Student Fee Budget Proposal.