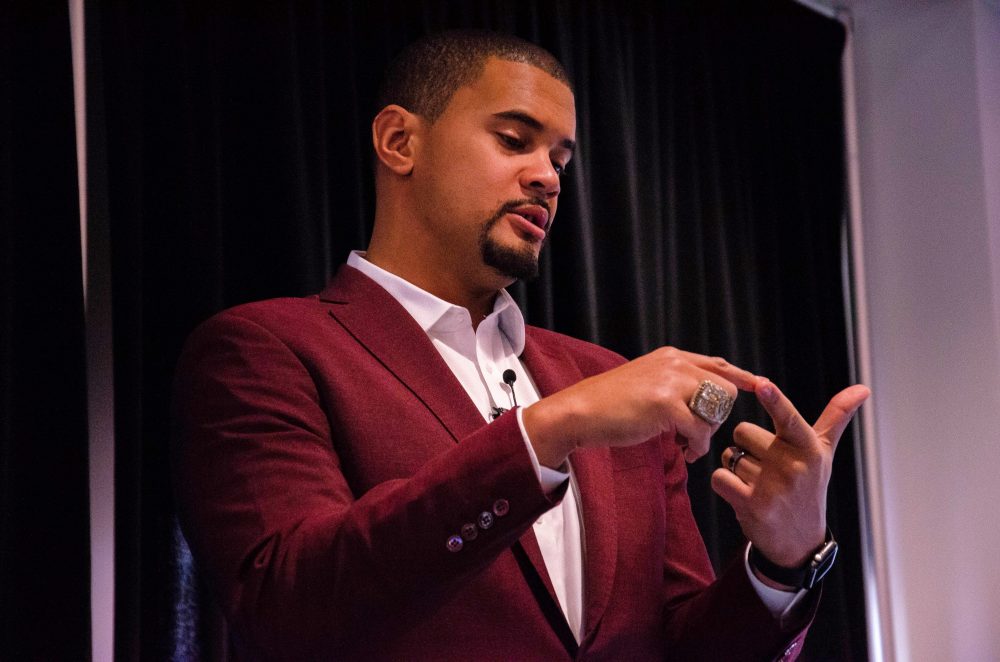 Recounting the times he was knocked down, Ryan Harris tells the audience what helped him get back up. Feb. 20, 2019. (Hunter Allen/CU Independent)

Issues of mental health, mindset and identity within athletics were explored at the second annual Inclusive Sports Summit at the University of Colorado Boulder on Wednesday.

Erin Rubenking, a psychological health and performance counselor, began a panel by saying her recent position at CU has made her more aware of the stress that student-athletes at universities are under.

“Student-athletes have so much on their plate,” Rubenking said. “I didn’t realize that until I started working here.”

From the expectation of performance on the field, court and classroom, student-athletes juggle stress every day of their lives, panelists said. Many experience sleep deprivation and body image pressures.

Rubenking highlighted the stigmatization of mental health within athletics, saying student-athletes can be seen as weak when they turn to help and are often told to “suck up” their problems.

“If a player broke their leg, the coach wouldn’t be telling them ‘just suck it up’,” Rubenking said.

Rubenking wants athletes to know that it is “okay to talk to a therapist” and to be struggling with one’s mental health. She also acknowledged that it is important to have diversity in mental health fields so that students can speak with those who relate to them.

“I am a white woman, heterosexual, and I know that there are student-athletes that maybe don’t feel comfortable coming to me,” Rubenking said.

If she isn’t the right person for students to talk to, Rubenking wants to make sure that students have other resources that they can go to.

Following the session, Monica Armstrong, an academic mentor at CU, shared her thoughts on diversity and inclusivity for student-athletes at CU.

Armstrong says that when she tries to direct students to CU counselors, they are hesitant.

“They feel like they might not be understood, or culturally it’s not the same,” Armstrong said. “I think that the lack of diversity that we have within that area to support our students with mental health doesn’t even get them in the door.”

Directly after the panel, Ryan Harris, former American football offensive tackle of the National Football League, continued the conversation with a discussion on mindset and identity.

The NFL veteran, who played for the Denver Broncos during the 2016 Super Bowl, posed the question, “why should we include people who are different than us?” Harris said that the importance of diversity goes beyond sports and leads to the creation of new ideas.

“Through 10 different surgeries, 10 years of playing in the NFL, the one that kept me going through success and failure was my mindset,” Harris said.

Vulnerabilities are never admitted in an NFL locker room, Harris said. On the eve of the 50th Super Bowl, he told himself he was terrified that his “greatest achievement in life would be his greatest failure” if the Broncos lost. To him, a healthy mindset is about being honest with yourself while holding yourself accountable for what you can work on.

Regarding quarterback Colin Kaepernick’s controversial protest during the National Anthem, Harris said that whether or not people agree with Kaepernick’s protest, people need to accept the realities that many people of color live through in the United States.

“As an African-American male, the only place where I fear for my life is at a routine traffic stop,” Harris said.  “I need you to accept that that’s the experience for a lot of people that look like me.”

After his talk, Harris shared advice for students in athletics.

“Being a student-athlete is one of the hardest things you can be in college,” Harris said. “You’re not alone in any of the issues you think you’re facing. Reach out to your teammates or services provided by athletic departments. Give yourself the opportunity to succeed.”

Medford Moorer, an associate director and academic coordinator in the Herbst Academic Center, shared the main question the athletics department wanted to answer through hosting the event: “How can we make those environments and those opportunities accessible but also inclusive?”

Moorer, who was a student-athlete, says he has seen a lack of diversity and a lack of understanding through the lens of sport, an issue which pertains to the entire campus.

“Whether it’s their sexual orientation, their race, ethnicity, ability … those things make me think about how we can continue to be more inclusive in all aspects of our lives,” Moorer said.