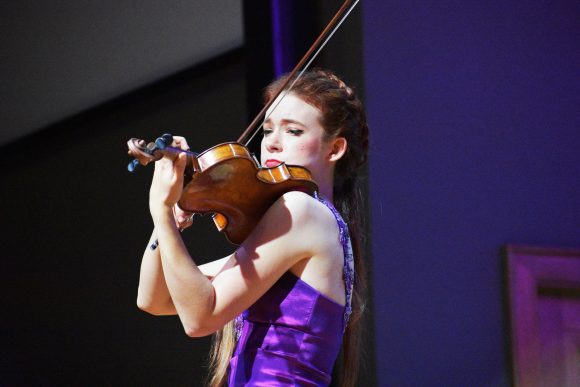 Chloé Trevor, an esteemed violinist, appeared with The Boulder Chamber Orchestra in a mashup of Antonio Vivaldi’s and Astor Piazzolla’s “The Four Seasons” on Dec. 1 at the Boulder Seventh-Day Adventist Church.

Led by charismatic conductor Bahman Saless, the Boulder Chamber Orchestra opened the concert with the 1877 Suite for String Orchestra by Leoš Janáček, a Czech composer.

The suite began with a dark, dramatic melody. Followed by a playful plucked line on the double basses, the melody on the violins soon became light and airy. The composition was graceful and self-assured, yet it sometimes lacked musical depth. Although beautiful, the piece was mostly predictable, with few unforeseen moments.

The second half of the program featured Chloé Trevor, an acclaimed virtuoso violinist. Trevor has already created an impressive international career by the age of 31. She has performed as a soloist with orchestras around the world, from the Hong Kong Sinfonettia to the Latvian Chamber Orchestra to Brazil’s San Paolo Symphony Orchestra.

Trevor began studying violin with her mother, a Dallas Symphony violinist, at the age of 2. A child prodigy, she first began appearing with orchestras in 2000 when she was only 13 years old. She won the grand prize in two renowned competitions, the Lynn Harrell Competition and the Lennox International Competition, while still a teenager.

A 21st-century musical entrepreneur, she has created her own summer music academy for young musicians and has a significant following on social media, including 159,000 followers on Instagram, a large fan base for a classical musician.

The buzz about Trevor is justified. Trevor is an animated, expressive player, at ease in the spotlight and able to draw a multitude of contrasting colors from her 18th-century violin.

In the mash-up, Trevor and the Boulder Chamber Orchestra juxtaposed Vivaldi’s “The Four Seasons” with Piazzolla’s homage to the former work, “The Four Seasons of Buenos Aires.” Written nearly 250 years after Vivaldi’s classic work, Piazzolla’s tangos illuminate the vivacious, dynamic culture of Argentina’s capital city during the year. The mashup traveled through the four seasons, with one season from Vivaldi and then one season from Piazzolla. Although not a true “mashup” in the contemporary context, the combination allowed the audience to see how more than two centuries had completely transformed the face of the composition.

The quintessential, instantly recognizable spring melody by Vivaldi began the mashup, with Trevor’s wonderful vibrato producing a lyrical, deep melodic line alongside the orchestra and the harpsichord. Next to the predictable harmonies and reserve of the 18th century, Piazolla’s work was eccentric and even shocking to hear. Trevor percussively scratched the strings with her bow, her violin squealing at the high points before melting down in a cool glissando, switching instantaneously between a harsh, metallic and a velvety, seductive tone.

Following a standing ovation and rapturous applause, Trevor played “Scherzo” by Fritz Kreisler. With great elan, she played the fast, fiery piece, her fingers and bow whirring across the strings. When her bow flew off the strings, she quickly bowed and left the stage, the last brilliant notes still ringing in the hushed hall.