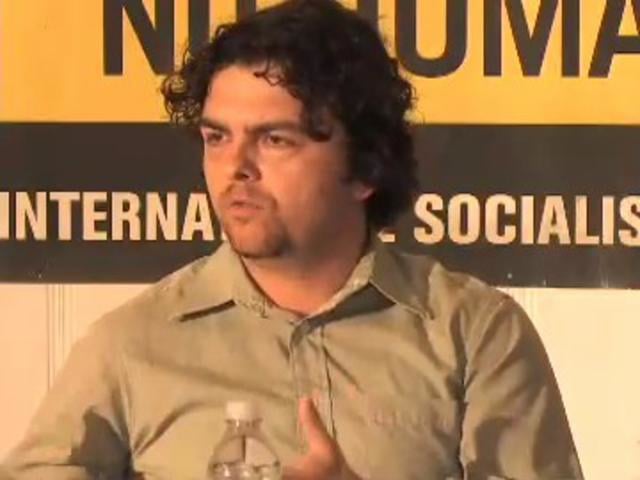 Justin Akers Chacón, a San Diego-based author, activist and professor of U.S. history and Chicano studies, shared insights on the Honduran migration and the global immigration crisis on Friday. The event was organized by the International Socialist Organization.

Chacón cited dwindling economic stability, lopsided foreign trade agreements and corruption as detrimental to the quality of life within developing nations. This poor quality of life resulted in mass migrant displacement. Recently, thousands of migrants from Honduras, Guatemala and El Salvador fled to the borders of Mexico in an attempt to escape these disparities.

“This significant hardship endured by these people over this 2,000-mile journey is a testament to the depth of the crisis,” Chacón said. “Trump provokes migration because he helps a corrupt government. For me, that’s the starting point for understanding why people are migrating.”

Chacón began to unpack the reasons behind this migration. Global markets and treaties helped create a win-lose cycle that depleted under-developed countries. He claims that a reliance on foreign markets stripped these countries of financial viability along with social and political peace.

“It’s not a secret capitalism is based on expansion. It’s kind of a secret it’s based on exploitation of labor, land, resources and control of markets to sell its products,” he said.

He went on to explain how foreign investors prey on the previous economic debts of these countries through the nationalization of their industries and the application of protective tariffs on those countries’ goods.

Chacón compared this to modern imperialism. He explained how foreign companies’ plants are exempt from international laws, policies and standards of work conditions.

Large corporations like Under Armour, Walmart and Champions have free reign to dictate how they want to operate their businesses. Chacón stated that these businesses have documented child labor use, anti-union intimidation, mass firings, widespread sexual violence against female workers and a general failure to comply with basic labor codes established by the international labor organization.

Along with labor code violations comes a lowering of wages. This exaggerates the working population’s inability to meet the minimum required cost of living. According to the World Bank, one out of five Hondurans live in extreme poverty, subsisting on $1.90 a day.

Violence has been a major driving force for migrants seeking a better life. Honduras has the highest murder rate per capita in the world. Deaths of women in 2005-2013 rose by 264 percent, with one woman killed every 13 hours.

Chacón ended by emphasizing the importance of understanding the reasons behind migrations.

“In Honduras … people are fleeing for their lives,” Chacón said. “As somebody who has children, I see the people clutching their children, understanding that they had to make a tremendous sacrifice.”

Other students in attendance commented on the importance of hearing all sides of controversial topics like migration.

“In today’s political landscape where brown and black people are so demonized, especially around the rhetoric of illegal immigrants … we need to humanize those that are dehumanized by political institutions currently in power,” said Colt Spencer, a member of the International Socialist Organization.

Another audience member, Parker Hollis, believed it was important for people to understand issues and how politics affects them.

“We’re in a time and place where we need to be more politically active more than ever,” Hollis said. “I think for everybody’s sake we should galvanize and inform people, not just through a political spectrum but in an important, moral and logical way.”

Sarah Summers, an attendee, summarized her views on the discussion.

“I think it’s important to see all sides of an issue,” Summers said. “It may be hard to look at the U.S.’s culpability in some situations, but I think it’s also important.”