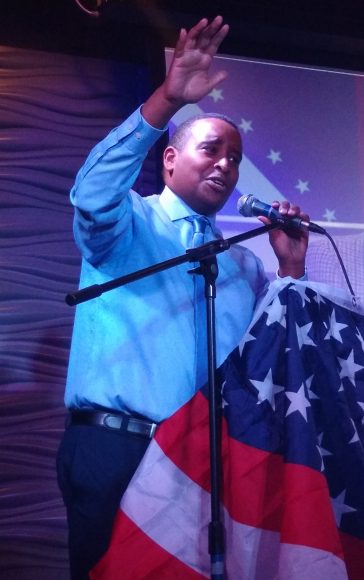 Democrat Joe Neguse defeated Republican Peter Yu in a race for Colorado’s District 2 seat in U.S. Congress Tuesday night. Following his sweeping victory in the primaries in June, he has been the favored candidate for the seat left open by newly elected Governor Jared Polis.

Neguse ran on a platform of “fundamental rights for Americans.” With views that could not be more antithetical to President Trump’s, Neguse plans to push for tangible change in Washington to “give everyone the chance to pursue the American Dream,” according to his website.

“If President Trump is listening, I hope he listens to the thunderous, thunderous message that the state of Colorado has sent tonight,” Neguse said in his victory speech at the Blue Wave 2018 Watch Party in Lafayette.

Boulder democrats stood with bated breath, waving American flags and dancing in place as polls approached closing time. Almost immediately, Neguse was declared victorious. As of 9:50 p.m. with 72% precincts reporting, he had secured 58.7% of votes.

For Cathy Lurie, a self-proclaimed climatologist, Neguse’s outspoken opinions on the environment and climate change are the most important part of his platform.

“If you don’t have clean water, air, soil, you have nothing,” she said.

For Lurie, Neguse is the future of the Democratic Party. She hopes that the young people who turned out to vote in this election will continue to be politically engaged until 2020.

“Boulder County has done something that no other county in the history of the state of Colorado has ever done,” Neguse said. “It’s elected an African American to represent this state in the United States Congress.”

Nikhil Mankekar, the chair of Boulder Human Relations Commission, is looking forward to the representation Neguse will bring to Washington.

“We need better representation and people who look more like what America looks like representing us,” Mankekar said. “And if we can do that in Boulder, of all places, I think that’s great.”

Katie Malzbender, a vice chair of the Boulder County Democrats, agreed that Boulder needs more representation. Neguse will give a voice to populations that have been traditionally marginalized in an overwhelmingly white city, she said.

Growing up in a household with refugee parents from Eritrea, Africa gave Neguse a unique set of insights and empathies into the current American experience, especially for immigrants. When his parents came to the United States more than 35 years ago, the country welcomed them openly, Neguse said.

Though he will be one of the youngest members of Congress in Washington at only 34 years old, Neguse is no newcomer to politics. During his time at the University of Colorado, Neguse served as co-president of the student body. He co-founded the largest youth voting initiative in the state, New Era Colorado, and was elected to the CU Board of Regents in 2008, where he served for six years.

Neguse is no stranger to being younger than his peers, either. Previous Governor John Hickenlooper appointed Neguse executive director of the Colorado Department of Regulatory Agencies when he was 31, making him one of the youngest leaders of a state cabinet in the country.

For Malzbender, Neguse’s age will allow him to better meet the needs of Colorado’s young people and relate to them in more meaningful ways.

“He brings a fresh perspective that a lot of the older folks in the United States Congress don’t necessarily have,” Malzbender said.

Though she recognizes the challenges Neguse may face as a young person asserting himself in Congress, she is confident that he will be able to do it.

“Although I’m excited, and our campaign might be over, the real work has just begun,” Neguse said. “We live in trying times which demand the very best of ourselves in order to combat the toxicity and the vitriol and the strife so common in politics today.”

For Mankekar, Neguse’s commitment to combatting hatred is a crucial part of his platform.

“He’s just a really authentic, genuine guy when he talks about issues that are important to him and the community,” Mankekar said. “I know he will really stand for those and he’s someone who will really do the right thing and I think that’s what we need in Washington right now.”

Neguse emphasized the importance of maintaining hope in the face of cultural adversity.