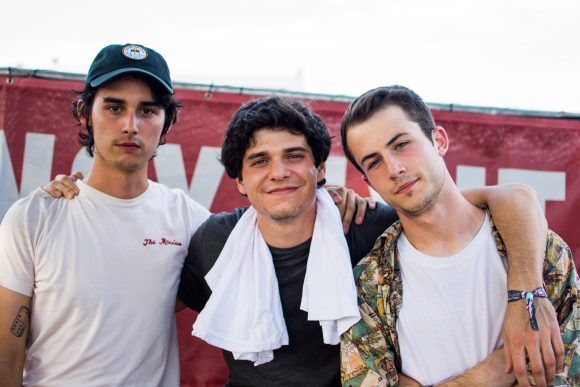 After their incredible set at Austin City Limits (ACL) 2018, CU Independent writer Angela Smith had the chance to speak with Wallows, an indie rock band from Los Angeles. The band released their EP, entitled Spring back in April, on Atlantic Records, as well as two other singles – “Drunk on Halloween” and “1980s Horror Film II” – on October 12.

Angela Smith: How do you feel about festival crowds versus headlining show crowds?

Dylan Minnette: Well, our festival crowds have been bigger than our own headlining crowds. That’s what’s crazy is that this is only our third festival we’ve played, the first one being Lollapalooza, then Life Is Beautiful and then this [ACL]. You don’t know what to expect cause at our own shows people show up, sure they’re great, our crowds have always been really fun. This is the first time having Wallows out in the wild, going somewhere where nobody has any reason to come see us at all. And when people do and they’re way bigger crowds than we expect, because I expect like 10 people to show up, that’s what’s been crazy about this whole thing. So it’s way more of a surprise. I can’t believe these many people care or know about us. You don’t think about that at all. It’s overall really inspiring and really exciting; makes you realize that people actually listen to music outside of just your core fans. It’s super weird but awesome.

AS: You put out two new songs recently, can you tell me a little about those?

Cole Preston: “Drunk on Halloween” was an idea that Braeden (Lemasters) had, he was supposed to be writing for the album we are doing, but of course, inspiration struck him or whatever. But then he sent Dylan and I that demo. We loved it. We ended up demoing it at my house and then recorded it and just put it out. It’s weird cause it’s the most recent thing that we’ve done, but it’s also the most recent thing that we’ve put out. Which is a cool feeling cause it’s totally new and fresh to us too. We normally have stuff sitting for a long time, it was nice to not do that for once.

Cole Preston: So “1980s Horror Film” was originally sort of the acoustic version, it was sort of Braeden’s solo moment, and we had an idea for a video where it played on the idea of it being that cheesy, cringey 80s vibe. Very Tommy Wiseau’s The Room inspired. Then we thought it would be cool to do an accompaniment — a song that would match that vibe, so we just recorded that specifically for the video and decided to throw it up because people wanted to be listening to it.

AS: I saw you had announced you were putting out a new song then suddenly there were two songs!

Cole Preston: Yeah a double whammy! Kinda like how Childish Gambino put out that Summer Pack, we’d consider this our Halloween pack. I wished we were seeing him perform, but it’s fine.

AS: Do you guys have any upcoming tour plans? Anything you can say about it?

Cole Preston: There’s one a-brewing. There’s music, there’s shows. Next year will be even busier, we’re nearing the end of this year for Wallows stuff.

While the end of Wallows’ 2018 is near, they have big plans for 2019 including new music and a tour that is slated to hit Boulder in the spring.