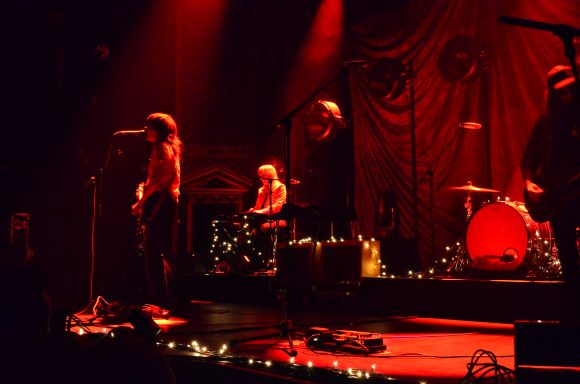 Courtney Barnett performed at The Ogden and my friend Greg turned 20 on the same night this weekend. Greg is a huge Courtney fan, so seeing Barnett on his birthday was ideal—despite his car getting towed in the process. It turns out that shedding his adolescence cost him $300 dollars. It was a hefty sum to pay as indulgences for his teenage sins. But that was the end of the night.

The show began on a mellow and folksy note, with an opening set from Waxahatchee. Katie Crutchfield’s acoustic set foregrounded her vocals and guitar work. She told the audience it was her first night on tour with Barnett in between songs, with a touch of southern twang. Barnett’s guitarist and keyboardist, Kate Harvey, accompanied the Alabama native. She finished up the set with a few songs on her own.

After the opener, Barnett strode out with a low-hanging guitar, ready to get messy. She began with the first track off her new album “Hopefulessness,” setting the tone with an ominous death rattle. This selection felt like a warning sign of anxiety reaching a boiling point. The album version aptly ends with the sound of a kettle’s whistle.

All night, Barnett was the master of tension, controlling every build and release through her vocals and guitar work. After, Barnett went straight into “City Looks Pretty.” Boy, depressive symptoms, like isolation, have never sounded this jangly and fun. “City Looks Pretty” followed the arc of most songs that night, which culminated in Barnett displaying her guitar prowess. Slowly unraveling the catchy melodies, she turned towards solos and played with pedals like a true Distortion Queen.

Barnett covered most of “Tell Me How You Really Feel” and updated the renditions with more noise, distortion, and growls. In “Nameless, Faceless,” she heightens the thumping song into something more raw, with flashing red lights matching the gritty feeling.

Barnett also included old fan favorites to the set like “Depreston,” “Anonymous Club” and “History Eraser.” Before playing “Are You Looking After Yourself,” Barnett shared the origins of the song with the audience—seeded in a conversation with her parents seven years ago where they worry about her health and financial stability. Barnett’s performance was almost theatrical with the way she changed her voice and posture when singing impressions of both her parents and herself. She sang the lines “I don’t know what I was thinking/I should get a job” with a smile. During the song, she bounced from side to side. It’s endearing as she’s probably smiling because her parents don’t have to worry about that stuff anymore.

For the encore, Barnett ended a mesmerizing show with covers of Elyse Weinberg and Gillian Wells, and an emphatic rendition of her own “Pedestrian at Best”.

Barnett’s live shows are a complementary foil to her albums. Her performances function as a visceral extension of the emotional depth in her music. Interestingly, Barnett didn’t really banter or talk much to the audience between songs. But in a time where so many artists chase after an image of authenticity by engaging with fans, it’s kind of a relief. It makes her music feel like a pure offering to the audience.

She won’t feign emotional intimacy, but she makes sure you’ll feel every word, every chord.

The show was so good that despite Greg paying $300 to get his car back and turning 20 in a Lyft with two strangers on the way to the impound lot—as the divinely torturous “Ironic” and “I Gotta Feeling” played—my friend still felt lucky that he got to see Courtney Barnett.