Good Charlotte’s “Generation Rx” attempts to be hip without success 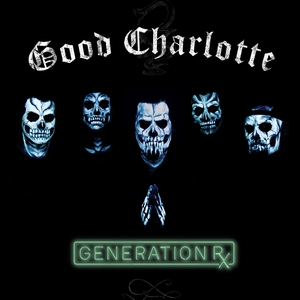 What does it take for an early 2000s band to rise again? Honestly, very little. Good Charlotte should have considered that when releasing their new album, Generation Rx. This nine-song compilation of nostalgic, slightly irksome rock songs may or may not make you regret you were alive between the years 2000 and 2005.

Good Charlotte, which formed in 1996 in Waldorf, Maryland, earned their stripes from their song “The Anthem” on the Young and the Hopeless album which rocked the charts in 2002. Lead singer Joel Madden’s distinct voice epitomizes the nasally, high-pitched tone of the pop-punk era. “The Anthem” set the standard of early 2000s music. Madden’s lyrics demanded rejection of authority and social norms.

It wasn’t until 2007 when the band was able to pick themselves up out of the dust with their hit “I Don’t Wanna Be In Love,” also known as (but not actually) “The Dance Floor Anthem.” The iconic song flooded stereos with vivacious, head-banging pop punk bliss.  Similar to “The Anthem,” Good Charlotte used in-your-face techniques such as high paced and overwhelming instrumentals underneath intense and frantic vocals. A huge element of their music tends to be an ongoing competition between the guitars, drums and Madden’s voice.

Listening to the tracks on Generation Rx, it’s hard to decide whether or not Good Charlotte’s intention to bring back their original sound is an act of charm or harm. The first track, “Generation Rx,” starts off with a gospel-like hymn of soft “oohs” that are not only eerie, but also go on for a tad too long. The song could perfectly fit right into a crappy 21st century low-budget horror movie.

Their second song, “Send Help,” blends right in. Even though the melodies seam together well, without looking at the playlist, listeners may believe that they are one big muddled song. The beginning of “Send Help” melds well with the horror-movie-like theme of “Generation Rx,” except the former takes on a more fun and nostalgic pop punk feel. However, the upbeat track’s melody suddenly is inflicted by random screamo moments. Which are neither tasteful nor relevant.

Despite finding some fatal flaws within the first two tracks of the album, listening closely in between the lines, the lyrical meanings are actually quite prevalent. Many of the tracks reflect upon depression, self-harm and drug abuse. These topics have taken a serious toll on society, specifically involving icons of the millennial era. In “Self Help,” Madden sings, “and it cuts like a knife/ it feels like a fight/ to take back your life,” which suggests an ongoing struggle with depression and its effect on one’s outlook on life.

The notion of drug abuse is also ever-present within the meanings of the music as well, hence the album’s title, Generation Rx. The drug-related references unintentionally (or not) pay homage to the recent increase in drug-induced deaths of millennial favorites such as Mac Miller, XXXTentacion and Lil Peep. The overall depth and meaning of Good Charlotte’s new material gave it a lot more credibility despite its surface-level lack of taste.

Delving further into the rest of the album, most of the tracks continue with nostalgic touches of the 2000s, yet they’re so much in common when it comes to tone and instrumentals that they tend to blend together. They are repetitive, borrowing too much from corny, turn-of-the-century cliches.

Notes of Evanescence’s desperate, broody tones and original Fall Out Boy-esque gunning guitar melodies are a little bit too obvious within the music. “Shadowboxer” is one of the tracks that displays these characteristics the most. Within the song, Good Charlotte seems to be on an ongoing pursuit to overstimulate the listener’s brain to the point of combustion with screaming vocals and overpowering guitar. It’s a mess.

Among the mangle of songs, there are a few redeemable tracks, proving that maybe Good Charlotte does have some inklings of hope left in their renewal attempts. “Cold Song” is a great example of a song mixing together amazing aspects of the band’s original roots with a more nuanced edge. It fits better with the music of the current time. The song starts off with soft piano and string instruments which introduce Madden’s tender voice. The best part of his entrance is the slight vocal fry he speckles throughout some of the longer notes. The ballad is also very well placed in the middle of the list of fast-paced, neurotic songs.

Despite “Cold Song” being a black sheep, it does not stray entirely away from Good Charlotte’s core competencies. At about a minute and a half into the song, there is a cutting-edge guitar solo that breaks apart the softer tone of the melody, giving the song the edginess it needs and deserves.

After listening to Generation Rx, most of the surface-level sentiment gained is negative. The songs are neither memorable nor dynamic. However, the deep meanings ingrained into the lyrics give the band a sufficient amount of redemption. Whether or not Good Charlotte will be able to successfully bring back the glory days of pop-punk is another question, but they might need another album, because Generation Rx just didn’t cut it.