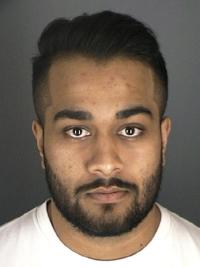 This story has been updated just after 4:00 p.m.

Freshman Shaan Evamn Sharma allegedly raped a fellow freshman in her dorm last November after a fraternity tailgate party. Sharma is facing charges of overcoming victim’s will, sexual assault on a physically helpless victim, and sexual assault according to public arrest records.

The victim appeared intoxicated and was escorted back to her dorm in an Uber by Sharma and two other fraternity brothers. After the two others left, Sharma raped the victim while she was in and out of consciousness, according to the Camera.

The victim’s friends found her unclothed from the waist down with Sharma in the room. Sharma told her friends that the victim removed her own clothes, according to the arrest affidavit. In March, DNA results from the victim’s sexual assault examination conducted after the rape matched Sharma.

Sharma turned himself in this morning and was released on a $10,000 bond this afternoon, according to Mike Wagner of the Boulder County Sheriffs Dept.

A friend of Sharma said he was in the Sigma Phi Epsilon fraternity, but had left CU after the fall semester. The friend wished to remain anonymous due to the sensitive nature of the case. Sigma Phi Epsilon has an annex, a property rented by several fraternity brothers, on the 900 block of 14th street where the victim encountered Sharma, according to multiple sources who have been to the annex.

“If what is alleged is true,” said Marc Stein, Greek Advocate at CU Boulder, “this is totally reprehensible.”

Sharma told police the victim had hit on him. The victim denied this, saying that she would not have hit on him, as she is gay.

This story will be updated.