The Colorado Buffaloes men’s basketball team has a bright future in its young core of talented players. At the same time, the team has a handful of departing seniors that have contributed a great deal to the program over the past several years. So before this 2017-2018 team plays its last game together, let’s take a look at each player’s style of play and who it best emulates at the professional level. 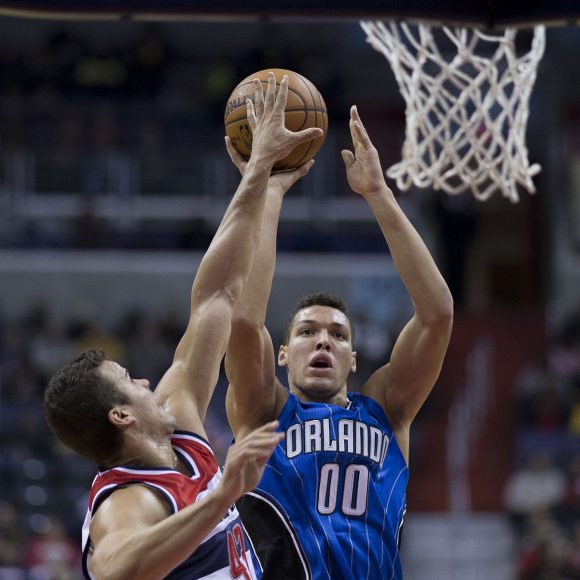 Aaron Gordon of the Orlando Magic in action against the Washington Wizards during the game at Verizon Center in Washington, DC. Nov. 15, 2014. (Keith Allison/Wikimedia Commons)

Bey has been compared in the past to Andre Roberson, but I’m not the biggest fan of that comparison. Bey doesn’t seem like the kind of guy to airball two free throws in a row, and Bey, although sometimes listed as a guard, is more of a forward with his 206-pound, 6-foot-7 frame. With the Buffs having an excess of guards, Bey is seeing more of the three and the four this year. Roberson is a lock-down defender while I see Bey as an athletic slasher who can also face up and shoot. It’s also worth noting that in no way can Roberson match the impressive dunks in Bey’s arsenal. Besides the vicious alley-oops from Bey we’ve seen in games, I’ve seen him throw down 360’s in warmups and I know that he’s athletic and long enough to pull off just about anything above the rim. Because of his ability to throw down impressive dunks, I see Aaron Gordon as a more fitting comparison. Gordon has thrown down some ridiculous dunks in his career, especially in recent dunk contests. While Bey might have a little bit of work to do to dunk like Gordon, I think the comparison fits because both are alley-oop threats who aren’t afraid to put a little extra flair on their dunks. Bey is going to play more of the four this year and is a capable and tenacious rebounder. Just a freshman, Bey has plenty of time to fill in to Gordon’s 6-foot-9, 220-pound frame and add to his already impressive dunk package. Maybe we could be so lucky as to see Bey in the NCAA dunk contest in a couple years. 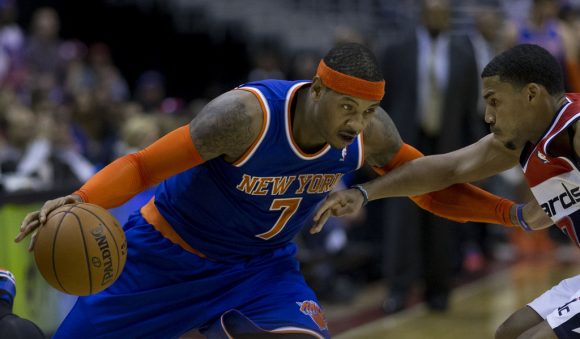 Carmelo Anthony figures out his next move during a game against the Wizards. Nov. 23, 2013. (Keith Allison/Flickr)

The first time I watched Wright shoot a basketball I instantly thought of Carmelo Anthony. Both elevate so smoothly you think every time they shoot it has to go in. Both players jump higher than most on their jump shots, especially when shooting from mid-range. Wright has a swagger to his game that is rare within the NCAA, and his confidence rivals that of even Anthony. While this comparison would be more fitting with a younger Anthony, I think it still fits since both players are so confident in their shots and would pull up from just about anywhere without hesitation. Wright admitted that his play style was unique, in that he was a little bit of a slasher but also a spot up shooter much like Anthony once was (think of corn-rows-2007-Nuggets Melo). Wright is developing into a dynamic offensive threat, as his 6-foot-5 frame allows him to shoot over defenders and finish inside.

Wright, once a Missouri Tiger, transferred last year and has gelled well with the Buffs, posting his best scoring averages in his college career. Anthony also moved recently, being traded by the New York Knicks to the Oklahoma City Thunder. Both players fit on their respective new teams and provide instant offense with their shooting. 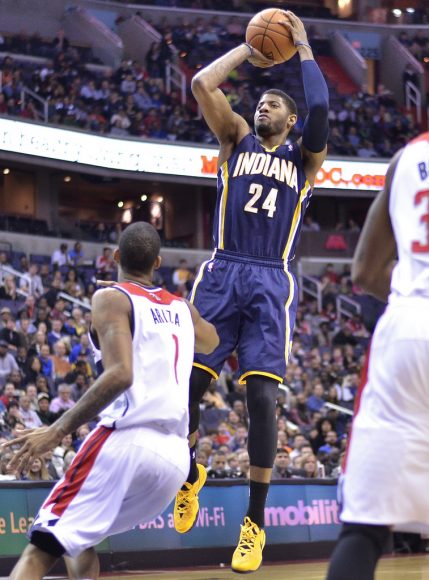 Originally I picked King’s NBA counterpart to be Jae Crowder, but I figured the fifth-year senior — who’s probably the most NBA ready player on the roster — deserved a more prestigious comparison. I was trying to think of an NBA player that could get hot from three but also didn’t lack on the defensive end, and Paul George came to mind. Both players are perimeter threats with silky smooth jumpshots, but they pride themselves on their defense as much as they do their offense. King’s defensive intensity is really unmatched by anyone else on the team, and a couple impressive chasedown blocks this season and his leadership even made me consider a LeBron comparison. I stuck with George however, as George and King are both terrific two-way players that can guard multiple positions. King, technically listed as a guard, leads the team in rebounds, averaging just over eight a game. The next player, Tory Miller Stewart, averages 4.7 rebounds per game. King is the leader of this team, not just in rebounds, and that’s why I went for a Paul George comparison as opposed to a Jae Crowder comparison. King has all the makings of what the NBA is calling a “3-and-D” player, as he’s a great shooter and doesn’t lack on the defensive end. NBA scouts must be happy with his defensive effort. King on multiple occasions has refused to get dunked on, seen here when he rejected UCLA guard Jaylen Hands to put the cherry on top of a key road victory for the Buffs. George, now a 24-year-old, could enter the NBA draft after this season. His three-point shooting and willingness to defend and rebound are surely turning heads. 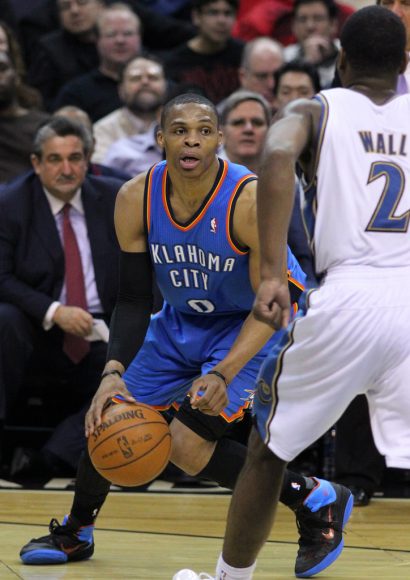 The easiest decision on this list, Wright IV is the key facilitator for this Colorado team and leads the team in scoring. Similar to Westbrook, in that both play at an extremely high pace, Wright IV is electric with the ball in his hands and slashes at the speed of light. Wright IV leads the team in assists by a long-shot, averaging just over five dimes per game. No other player on the roster averages more than two assists per game.

Head coach Tad Boyle has referred to him as “the motor of our offense.”

Wright IV also leads the team in minutes, and has basically earned the keys to the offense. He seems to be fueled by disbelief the same way Westbrook is, and his header on Twitter is a tweet that reads “CU’s roster is pretty ugly. Everyone I’ve talked to about the Pac-12 has them in the 8-10 range.” Both guys play the game with a chip on their shoulder and know how to tune out distractions and play the game the way they know they can. Just 6-foot-0, Wright IV may not have the high flying tomahawk dunks of Westbrook just yet, but he can still get up. Wright IV isn’t averaging almost a triple double like Westbrook, but it’s worth noting he came close with a 30 point, 11 assist, 9 rebound performance against South Dakota State earlier in the season. Oh, and he’s just a freshman.

I also realize that I’ve now inadvertently picked the Thunder’s big three as Wright IV, King and Wright, but I feel like that makes sense for our team. Those three are the Buff’s “big 3,” if you will, since they’re the only players who average double-digit points per game. While I didn’t do this on purpose, it does make a lot of sense. 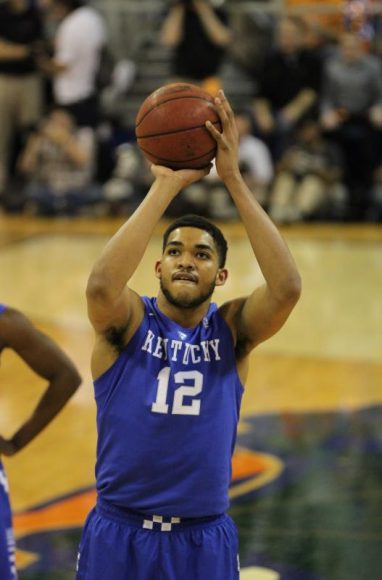 Karl-Anthony Towns shoots the ball at a college game in his last season at Kentucky. Feb. 7, 2015. (Dennis Adair/Wikimedia Commons)

Walton said his favorite player growing up was Chris Bosh and he thought his game resembled that of LaMarcus Aldridge and Karl-Anthony Towns. I eventually settled on Towns as the most accurate comparison. Towns and Walton are both 7-footers with range, which makes them tough to guard, as they’re just as adept in the post as they are from mid-range. Walton can be dominant in the paint on both sides of the floor, whether it’s with hook shots in the post or using his long arms to block shots. Towns’ plays nearly double the minutes that Walton plays, and Walton is just a freshman, so he shouldn’t be discouraged by the stat discrepancies.

“I see Dallas as a double double kind of guy. I want double doubles from him,” Coach Tad Boyle said after the Arizona game.

In that game, Walton was perfect, shooting seven-for-seven from the field. The similarities are there, down to the shooting form. Neither of them really need to jump on their shots since they’re so tall, and both have a lower release point than most. Both players can knock down the mid-range, and can also step back and shoot the three. I can see Walton being a really good mid-range shooter closer to the end of his career, as he still has plenty of time to iron out his game and work alongside Wright IV. Much like Towns, Walton doesn’t lack on the defensive end; he leads the team in blocks and had a key double block in the Arizona upset that ended in a Wright IV dunk. For Walton, all the tools are there — he’s a seven footer with touch who can pick and pop as well as he can pick and roll. The only asset Towns has that Walton doesn’t is a Jack Link’s Beef Jerky sponsorship. 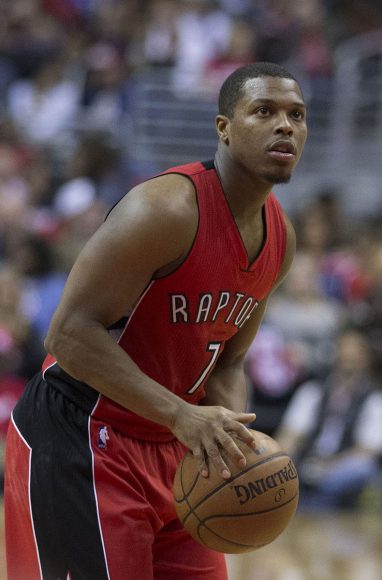 Kyle Lowry getting ready to make his next move at a game against Washington. Apr. 26, 2015. (Keith Allison/Wikimedia Commons)

If not for Wright IV, Collier would be seeing the floor much more, but despite coming off the bench, he’s made the most of his minutes. Collier had double-digit performances off the bench in both the Arizona upset and the Arizona State upset and is on pace to have his highest field goal percentage from any season in his career. Collier, much like Lowry, is a problem on ball screens and can shoot from long range even with a hand in his face. Sometimes for Lowry, who averages almost eight three-point attempts per game, the tougher the shot, the more likely it is to go in. Lowry, who is actually two inches shorter than Collier, is not afraid to get amongst the trees in the paint and finish. Both point guards are crafty finishers who know how to use the glass and their bodies to secure contested layups inside. Collier has had an up and down career at CU but seems to be finding his stride in his senior season. Boyle sometimes plays Wright IV and Collier on the floor at the same time, and this dual-ball handler lineup is adept at getting shooters good looks from outside. Collier can operate as the sole point guard, but having Wright IV in the lineup with him allows Collier to let it fly from deep more often and not always have to rely on creating his own shot. 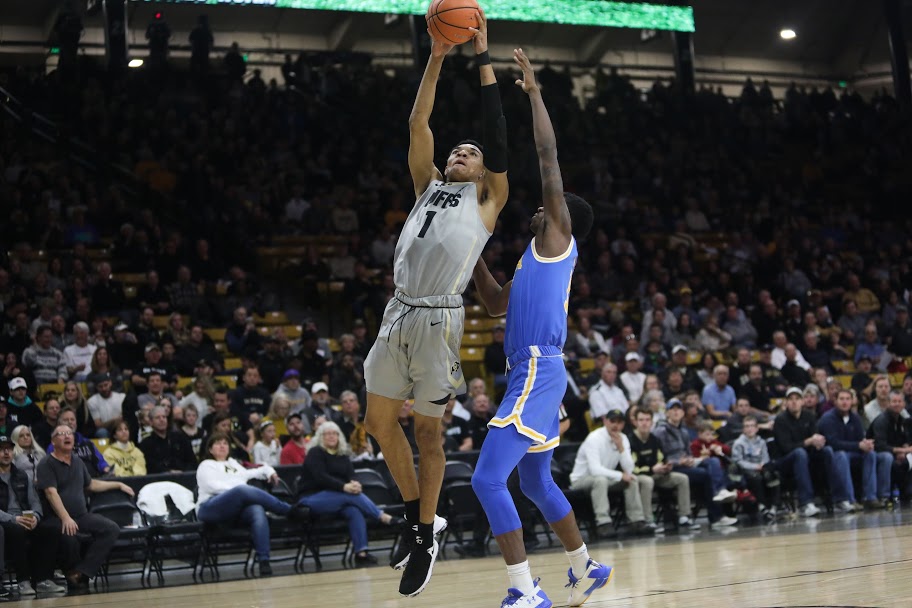 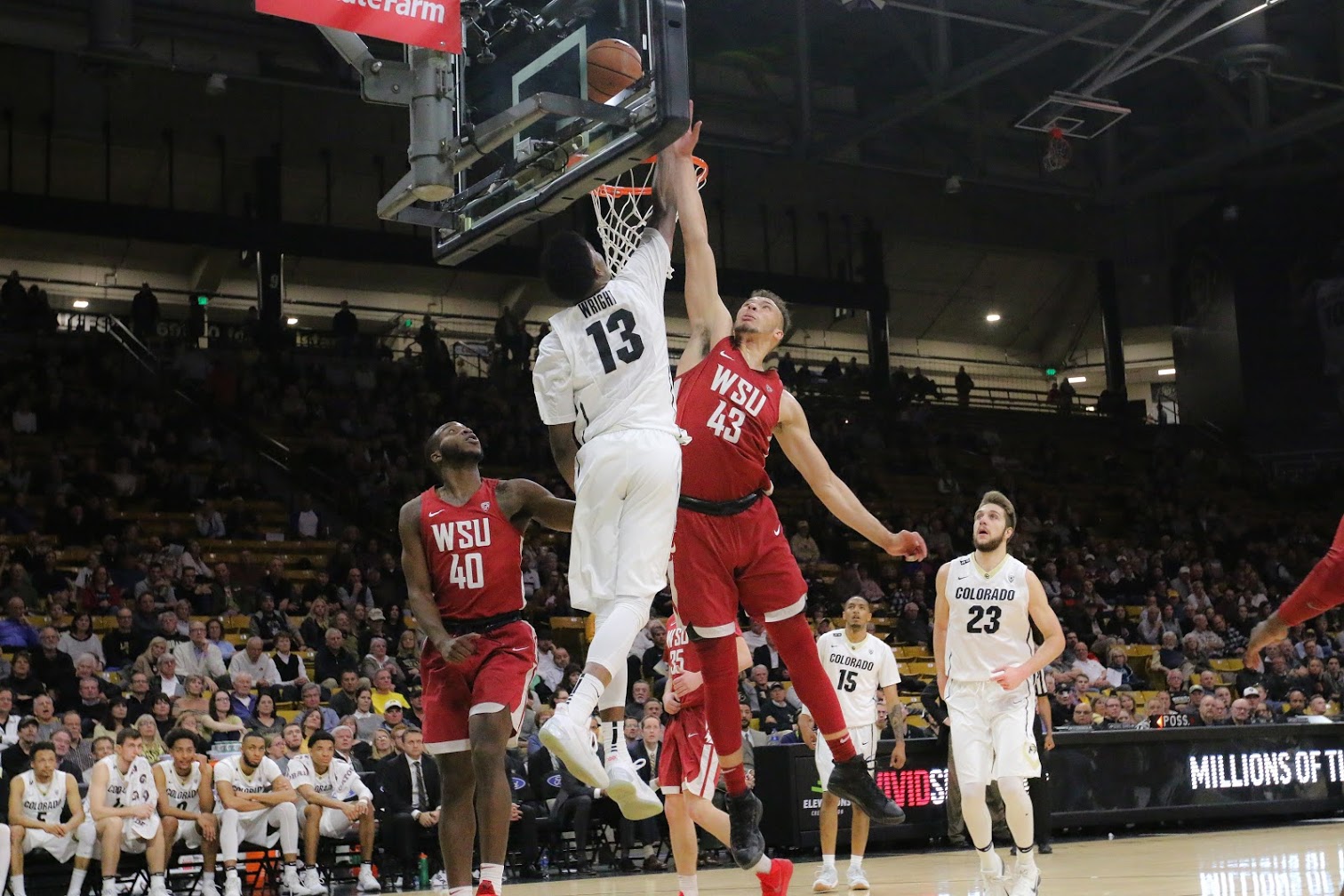 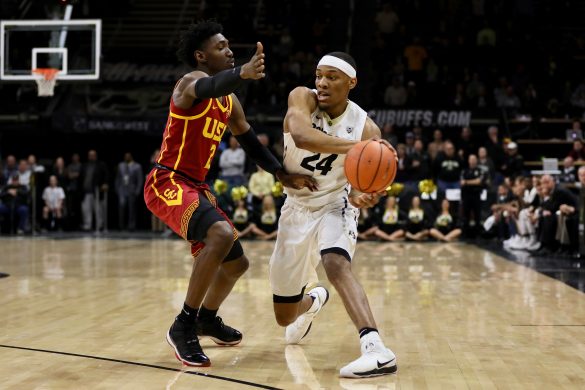 Senior guard George King looks to pass the ball around a Trojan defender during the first half of play at the Coors Event Center. Feb. 21, 2018 (Nigel Amstock/CU Independent) 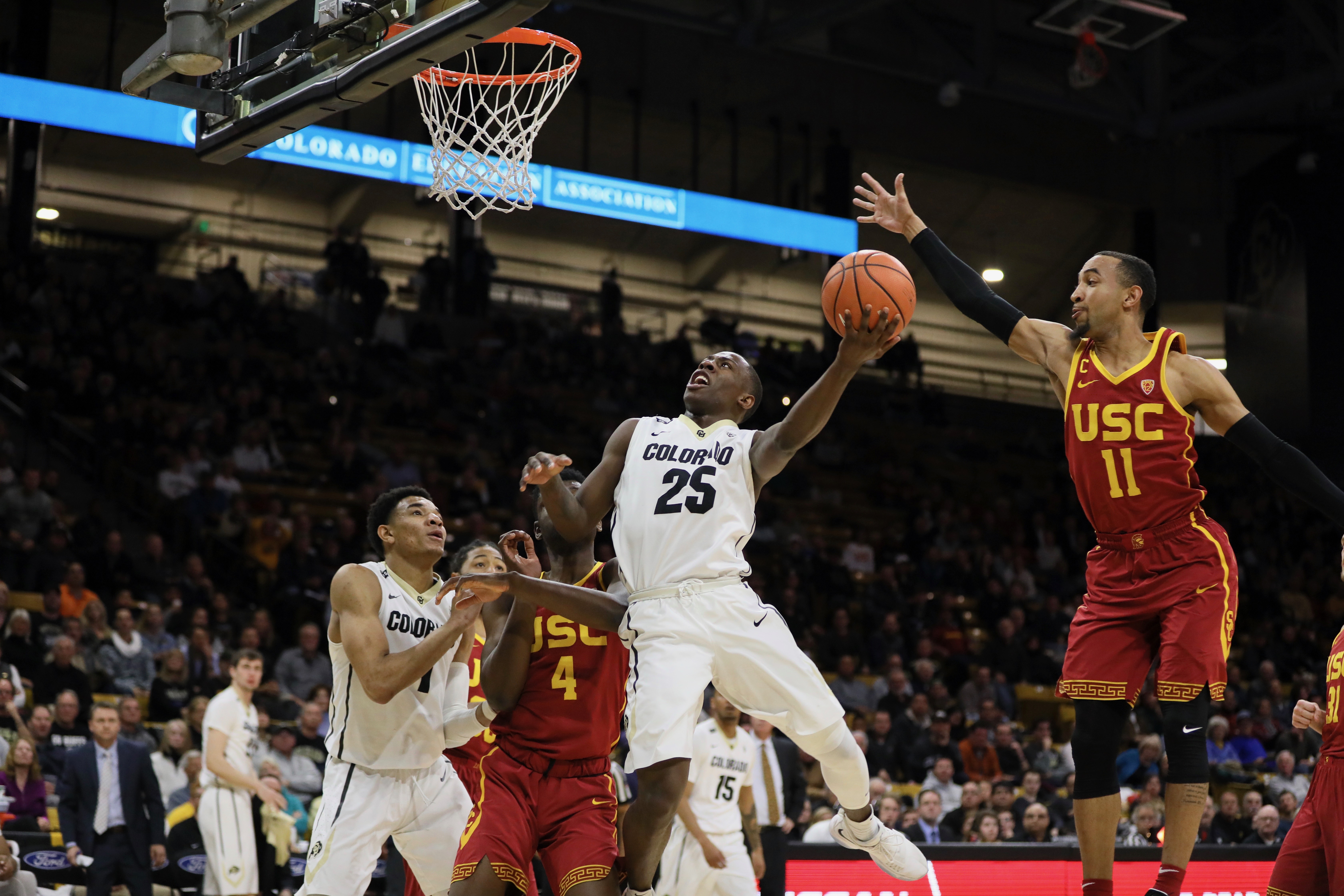 Freshman guard McKinley Wright IV elevates the ball toward the basket during the second half of play at the Coors Event Center. Feb. 21, 2018 (Nigel Amstock/CU Independent) 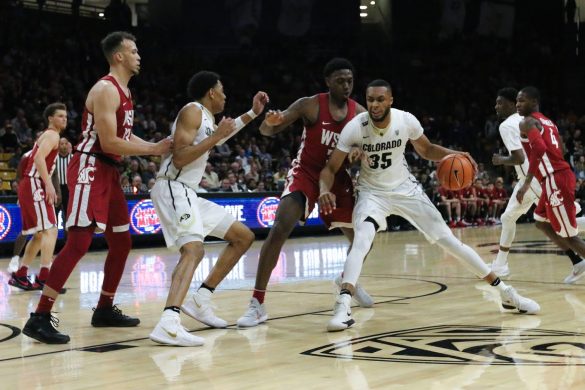 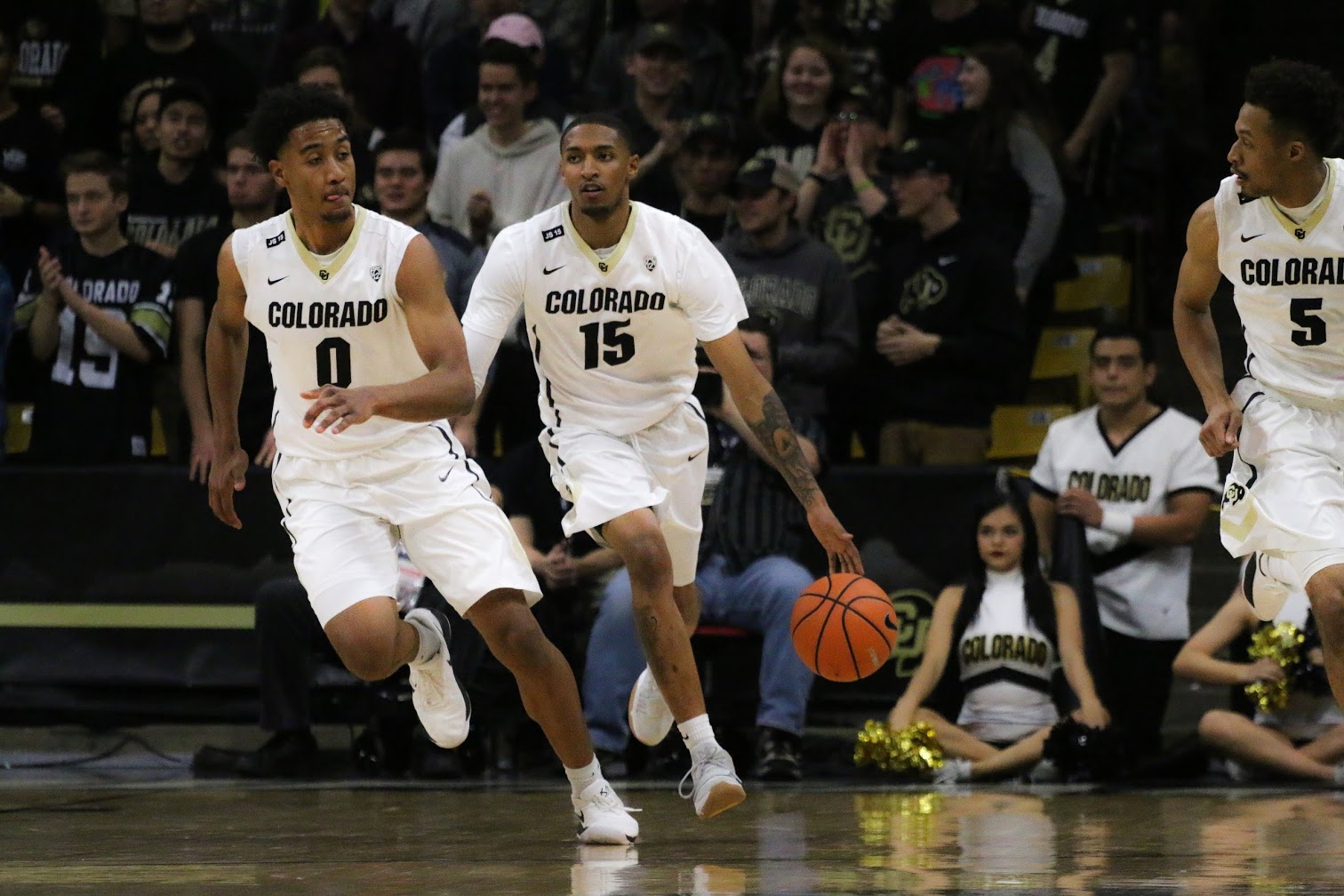 Dominique Collier dribbles the ball down the court as his other team mates prepare for a pass. The Buffalo's strong offense helped them maintain a lead over Washington State. Jan. 18, 2018. (Fiona Matson/CU Independent)