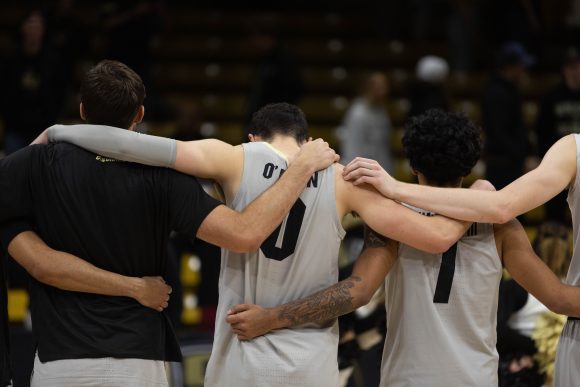 Following their loss to the University of Southern California on Jan. 12, the Colorado Buffaloes men’s basketball team faced another loss, 68-54, against the #7 UCLA Bruins at Pauley Pavilion on Saturday, Jan. 14. Colorado is now 11-8 overall and 3-5 in conference play, as well as tied for ninth in the Pac-12 standings.

Though the Buffs played well against the #7 ranked team in the country, their mistakes on both the offensive and defensive side of the ball cost them dearly. Despite being ahead at halftime, the Buffs couldn’t capitalize on what was likely the worst stretch of UCLA’s season and were left in the rearview mirrors once the Bruins got their momentum back.

During the past two away games in Southern California, Colorado racked up a total of 45 turnovers. With that amount of mistakes against two of the top three teams in the conference, the Buffaloes threw away their chance to secure important wins on the road.

“Our inability to take care of the basketball was the difference — that and 18 offensive rebounds,” said head coach Tad Boyle. “We played well enough defensively to win, but they just bested us on the boards.”

Led by Jamie Jaquez Jr., UCLA played one of their best defensive games of the season. The Bruins had 15 blocks and 11 steals against Colorado, which resulted in 23 turnovers and 15-49 shooting for the Buffaloes. Though the Bruins got off to a rough start, they came out with enough energy in the second half to overpower the Buffs.

“The tougher team won,” Boyle said. “UCLA was the tougher team, especially [during] the last 10 minutes of the game. When you get ready to play UCLA, you know you’re in for a fistfight. And they absolutely abused us on the boards in the second half. Our defense was good enough to win tonight, but our rebounding wasn’t good enough obviously. [We had] 23 turnovers, another season high.”

Colorado aimed to gain the advantage early in the game, using their defensive pressure to force the Bruins into mistakes, with both teams shooting less than 40%. At first, the game stayed low scoring and tight. Then, by the end of the first half, the Buffs pulled into the lead with 31-28. With UCLA missing all of their threes and making less than half of their free throws, it seemed like the Buffs had a shot at winning.

During the beginning of the second half, the Bruins went on to miss 14 straight shots. However, the Buffs did not manage to take advantage of this opportunity. During that time, the Buffs only made three shots and gave up eight turnovers. With Colorado down 45-44 and nine minutes left, the Buffaloes seemed to lose all of their momentum and pace. They proceeded to let UCLA go on a 17-0 run, which soon demolished the rest of Colorado’s confidence.

Despite a push at the end, the Buffaloes faced their downfall with a season high in missed shots and turnovers. Even with the uncharacteristically weak playing by the Bruins throughout the first half, the Buffs still missed their chance to secure their win. In the final 10 minutes of the game, UCLA outscored Colorado 33-10.

Despite this disappointing loss, Colorado showed that they could hold their own at multiple points in the game. But, they just couldn’t quite pull through.

KJ Simpson led the Buffaloes with 17 points, followed by Javon Ruffin with 11 and Tristan da Silva with 10. Though these were the only Colorado players to score more than five points against UCLA on Saturday, the trio only made nine of their 28 shots combined. As a team, the Buffs shot 30% from the field with only 54 points, a season low in both categories.

“It was just turnovers and offensive rebounds for them,” Simpson said. “The numbers don’t lie. The statistics don’t lie. We had 23 turnovers. It’s hard to win when you have those kinds of stats.”

Though CU has recently seen a few tough losses, they still have strong rankings overall for the season. Currently, Simpson is second in Pac-12 scoring with 17.8 per game, and Tristan da Silva is ninth with 14.7 per game. Simpson is in the top 10 for assists, while da Silva is in the top 10 for steals. By far the best offensive players for Colorado, these two certainly deserve to be at the top of the scoring charts.

After collecting 10 rebounds in the loss, J’Vonne Hadley is ranked 13th in the conference with 6.8 per game. Sophomore center Lawson Lovering is also improving very quickly. During the past week, he had his first double-double against USC with 13 points and 14 rebounds. Lovering also sits 11th in blocks in the Pac-12, averaging more than one every game.

Certainly, CU has many great players and a highly-ranked defensive team; however, overall, they have been struggling to consistently perform well enough night in and night out to win against top-ranked teams.