Dead geese on campus likely related to avian flu, according to officials 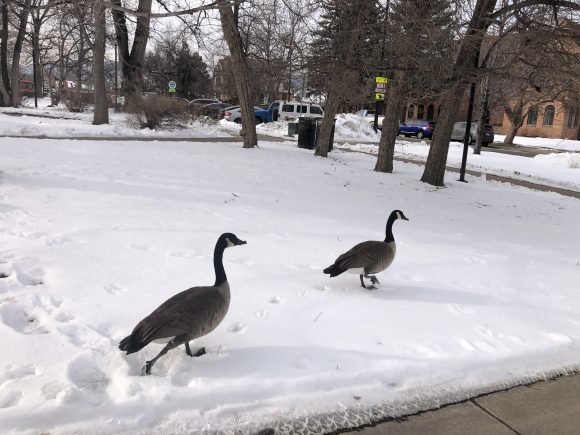 University of Colorado Boulder facilities management teams found several dead geese around campus ponds in early January. The deaths are likely related to a strain of avian influenza affecting birds across Colorado, according to university officials.

A bulletin released by the university on Jan. 12 told community members to stay away from geese that are dead or acting strange and to stay out of campus ponds.

“In coordination with Colorado Parks and Wildlife, we communicated these safety tips to our campus community ahead of the start of the semester,” said Andrew Sorensen, a spokesperson for the university.

Facilities management found 17 dead geese at a pond in the northeast corner of campus, near 28th and Colorado, and two dead geese at the Kittredge pond near residence halls, as of Jan. 12.

Similar to cases of avian influenza across Colorado, facilities management found the geese dead without wounds or other signs of trauma.

According to the bulletin, the campus Integrated Pest Management team followed protocol to dispose of the dead animals in a “designated containment vessel” to minimize the chance of spreading the disease.

According to the CDC, avian influenza is rarely transmitted to humans. If contraction occurs, it is usually caused by direct contact with infected birds and can lead to severe illness.

According to a report from the Colorado Department of Agriculture, over 6 million birds have been affected by the disease since the outbreak began last spring.

“Colorado Parks and Wildlife is currently exploring how to track the situation, and if they provide updated guidance for local agencies or the public, we will act on that,” Durant said.

University officials advise community members to report birds or animals that are dead or acting strange to the Operations Control Center at 303-492-5522.