What the **** happened to Fall Out Boy: A retrospective 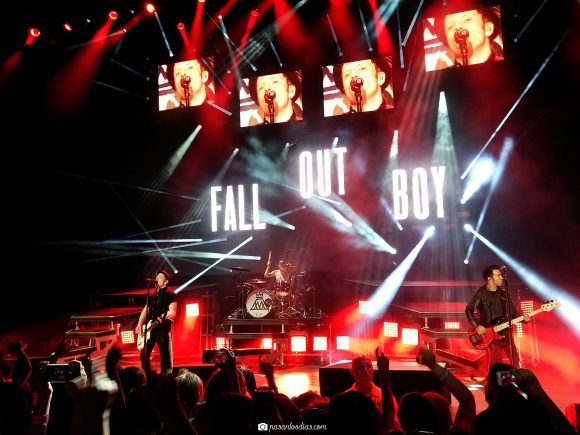 Arts writer Camille Saures reviews Fall out Boy’s newest album “MANIA,” and looks back on the winding history of the pop-punk balladeer’s career and rise to NFL commercial prominence.

To begin this exploration of pop-punk royalty, I will preface with an exercise in honesty. Before this week, my relationship with the band Fall Out Boy was nothing more than vaguely nostalgic memories surrounding their “Infinity on High”/”From Under the Cork Tree” era glory days. During my time as a Fall Out Boy fan — we’ll call them the middle school years — the band was actually in the midst of their infamous five-year hiatus. This period was a regrouping both personally and sonically for the members who struggled with mild drug abuse, communication and a distaste for their image as an “emo” band. In 2009 with their future murky, my friends and I became late adopters of the pop-punk spirit, combining the onset of puberty, hormones and the discovery of entry-level Hot Topic fare.

Considering their latest album, “MANIA“, released this past month, I straightened my bangs and listened to every Fall Out Boy studio album going all the way back to their first appearance on the scene in 2003. I bit my tongue through the genre-jumping, the painful yet glorious tracks with “Titles Stylized Like Full Sentences Out Of A Myspace Manifesto.” And yes, I even stuck it out through their latest cringe-worthy flirtations with electronic dance music. Before I start to dive bang-first into that mess, let’s look at where they started.

The band formed in 2001 in an Illinois suburb by local hardcore boy Pete Wentz and guitarist Joe Trohman. After sifting through several members in their early stages, lead singer Patrick Stump and drummer Andy Hurley soon became permanent fixtures. In 2003 they signed with indie label Fueled by Ramen and took off with their long-awaited studio debut: Take this to Your Grave. Following this success, the band achieved a ravenous fan base and subsequently played Warped Tour 2004, a tour they played pretty much every year following.  The bouncy twelve track collection proved to be a strong debut, featuring a unique hyper-produced pop-punk sound with an underdog complex that would eventually come to help define a genre, in addition to a generation of kids with their hearts written in sharpie on their sleeves and a desire to do angst-driven things in suburban parking lots. Standout emotional ballads like “Calm Before The Storm” incorporated a screamo influence, something that changed the space of the mainstream charts they occupied.

There is a darker side to their early success evident in Wentz’s attempted suicide in February of 2005. In May of that same year, the ballad-like urgency of their sound was further articulated on their sophomore effort From Under The Cork Tree. This album is a personal favorite, famed for the unintelligible yet catchy mess “Sugar We’re Going Down Swingin,“ as well as the soundtrack to many a tween’s sexual awakening, “Dance, Dance.” In 2007, they released their third record, “Infinity On High” which shows a more confident and swaggering Fall Out Boy, with hit “Thnks fr th Mmrs,” arguably the best rock song in their discography.

2008 brought their fourth record, the scattered yet still authentic seeming “Folie a Deux.” It still featured several anthemic songs, “I Don’t Care” and “Headfirst Slide Into Cooperstown on a Bad Bet”, as well as the ever so whiny yet heartstring-pulling pop of “The Shipped (Gold) Standard”, but it fails to match the success of the personal and angsty emotional ballads of its predecessor. Unfortunately, the disorganized nature of the album compared to their previous efforts made it clear that the hiatus was imminent.

Did they come back from it making better music? No, but they did become more successful. Swapping Warped Tour mosh pits for Pepsi Center adjacent stadiums, the band is more embedded in our culture now than ever before. Both 2013’s Save Rock and Roll and 2015’s American Beauty/American Psycho conformed to radio-friendly pop-trends of the time, each charting massively catchy pop hits such as “My Songs Know What You Did In The Dark”, and “Centuries.” But in the trade-off, they abandoned the genre that established their iconography altogether. A sad, but natural progression of a band trying to stay in the game.

Fast-forward back to the present, and the public is faced with the bands newest creation. MANIA is a relic almost no one who weathered the hiatus ever saw coming. It is a seemingly complete 2018 pop record, full of glitchy EDM drops and radio-friendly hooks. The band has been able to retain its cultural relevance over the years remarkably well, but it falls short of actually being musically relevant or presenting anything interesting, unlike experimental pop maven Charli XCX’s Pop 2, also released this year. It’s perfectly contemporary without being innovative; yet harmless without being necessarily good.

Unlike their previous two albums, their latest attempt lacks any songs that stand out. In essence, “MANIA” sounds like James Corden tried to make a record with Calvin Harris four years ago. Something I never wished to hear.

In typical Fall Out Boy fashion, “MANIA” is riddled with pop culture references: Honoring Wilson from Castaway, goth girl Wednesday Adams and a nod to this year’s Tonya Harding virility. There is even an attempt at a tropical house song, “Sunshine Riptide.” This makes for a particularly unnerving listening experience when overlaid with lead singer Patrick Stump’s iconic, propulsive and almost vaudevillian timber.

The record is an unsurprising let down of empty calories in the digital age. This is ironically, and perhaps knowingly reflected in the infomercial inspired music video for the song, “Wilson.”

I am sad to see Fall Out Boy’s raucous angst and cloying self-aware wit reduced to a point where it now seems fabricated. Or, simply not present alongside their signature 00’s rock n’ roll guitar shredding. At one point this authenticity made them into the mainstream poster boys of “scene.”  Wentz was quoted in an interview with Rolling Stone saying that “it feels like every once in awhile, you’ve gotta do a hard restart that clears the cache and erases the hard drive. I think that’s what [Mania] was – a big palette cleanse.”

There is something to be said for refusing to be put in a box and starting anew. MANIA debuted at the top of the Billboard 200 charts, making it the third consecutive Fall Out Boy album to do so. However with “MANIA”, “Save Rock and Roll” and the explosive “American Beauty/American Psycho,” Fall Out Boy seems to have lost their original edge. They are no longer saviors of an androgynous, skinny jean clad subculture in a decade in which “that’s so gay” was a culturally common pejorative punchline. In 2018 they are a band that makes unoriginal stadium songs with Stump’s voice with melodies standing as the only connecting thread back to their better days.

After drowning myself in their history this past week during every spare moment of time— surely propelling them to the top of my most listened to Spotify artists of the year — I couldn’t deny the undulating magnetism of Stump’s vocals or Wentz’s tongue-in-cheek taunting lyricism. I have come to appreciate their place as the kings of pop-punks heyday, and the outward-looking perspective that differentiated them from many of their fellow whining, saccharine peers.

Just because you can still log on to Myspace in 2018 doesn’t mean you should, and the same goes for listening to a new Fall Out Boy record.