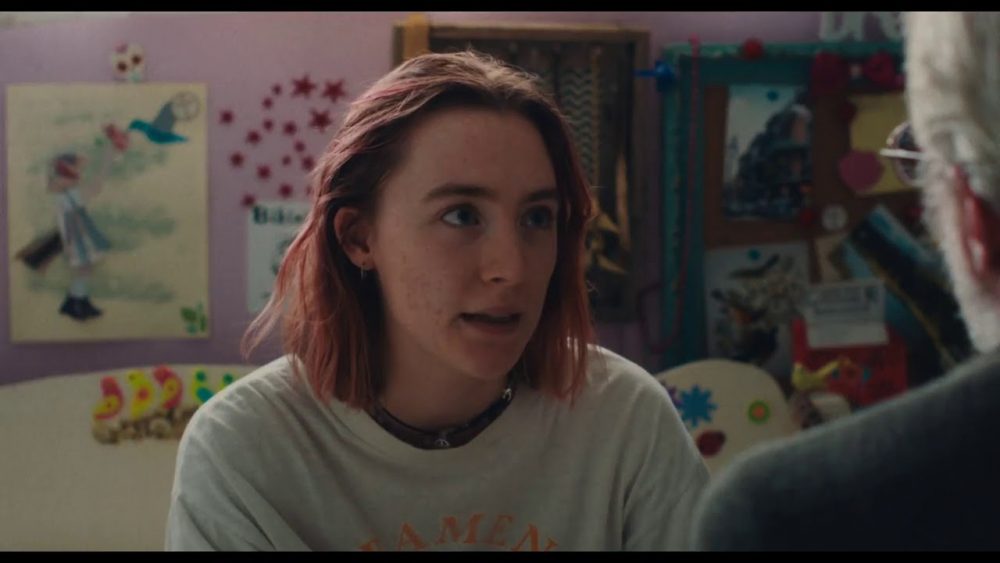 Lady Bird, starring the incredible Saoirse Ronan, is a coming of age film that will long continue to come of age. It’s visceral, hilarious and leaves you with the unshakable need to write to your parents.

What makes Greta Gerwig’s directorial debut so universally compelling, shooting it to the top of rotten tomatoes ranks and defeating Toy Story 2 as the highest rated film to date is simple. Its world makes you feel something, and it feels true — so much so that it holds the power to possess even the most skeptic critics to blubber into their Junior Mints with heartache as The Dave Matthews Band plays. We recognize Lady Bird. It exists within our own worlds.

Set in the early 00’s, in and around an all-girls Catholic school in Sacramento, Lady Bird follows strong-willed senior Christine, who prefers if you call her Lady Bird, a title she gave herself. While the most apparent, this quirk is probably the most boring trait of the film. It doesn’t seem to have a function other than to provide a snappy title and reinforce the character’s individualist spirit.

What’s far more interesting is Christine’s conviction, as we see it, in her relationships, particularly with her mother.

This dynamic is important, not just in the context of the film, but in a macro sense. From the opening scene, we see its temperament. One moment the Lady Bird and her mother are crying together in the car listening to an audiobook of Grapes of Wrath, the next they are viciously butting heads with such Shakespearean theatricality that the moment ends with a hot pink cast.

They take things personally and anticipate each other’s actions, confiding personal truths then cutting each other with words. At home, in the grocery store, buying a dress for prom. It’s a particular kind of intimacy.

I stopped counting the number of times my own mother, my date for the evening in question, bored into me with eyes flooded with recognition. We sat watching versions of ourselves. It is rare to see such a demonstration of the mother-daughter relationship as graceful and with such wit as Gerwig has achieved.

Like the better part of its genre, the film itself is about Christine’s exploration of self during the tumultuous transition between senior year and college. This, of course, includes themes of romance, friendship struggles, fear of the future and the forging of an identity. Unlike John Hugh’s coming-of-age classic, Pretty and Pink, Lady Bird’s end goal isn’t a boyfriend — a boyfriend is just one part of her story. If any one relationship does drive the film, it’s the one with her mother. Even still, Lady Bird’s story is her own.

For those of us who endured the trivialities of an all girls catholic school, myself included, the film pays precise homage. It captures the beauty in female friendship, the teacher crushes and the ritualistic nature of both Catholicism and teen girls. It also expresses the feeling of strange reverence for a place even when you can’t wait to flee.

Lady Bird herself is confronted with this upon meeting with a nun to review her college application. The nun suggests that her attentive writing about her hometown insinuates a possible love for it.

Lady Bird is a beautiful film created by brilliant women and should be on everyone’s watch list. If you’re feeling brave, you’ll even see it with your mother.