Wiz Khalifa’s ‘Laugh Now, Fly Later’ will blow you away … if you have enough smoke 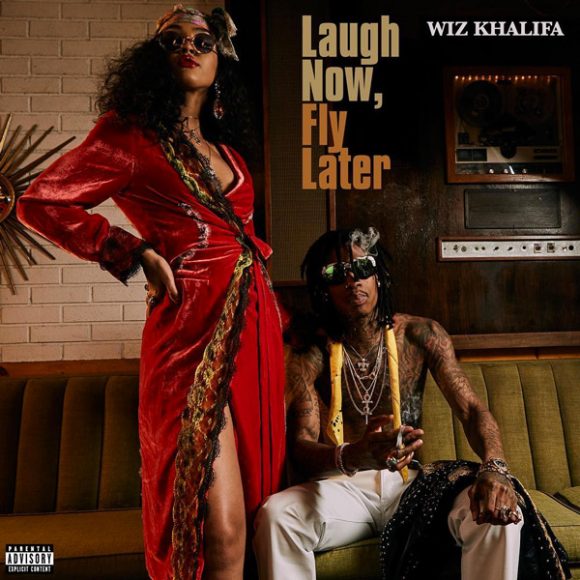 Leave it to Wiz to offer up a high dose of endless marijuana references and chill vibes within his new music. The rapper released his 10-song project last Friday, with the supposed intention of it being the predecessor for his upcoming album, Rolling Papers 2.

Laugh Now, Fly Later is a compilation of silky smooth modern beats with a perfect amount of authentic Wiz flavor. In most of his songs, the rapper actually conformed to a popular trend that has been recurring in hip-hop — repetitive deep-bass beats. In the song “Letterman,” instrumentals closely resemble the style of the famous music producer Metro Boomin. A synthetic piano scale flows up and down continuously on top of an earthy, convulsing bass. Even though the encompassing beat is appealing at first, it tends to become too repetitive resulting in monotony. If the rapper — or his production team — added some changes in sound levels or instrumentals throughout the tracks, he could have greatly improved the overall tone.

Despite the familiar feel, the backtracks are pretty dynamic, at first. A key feature that attempts to add a certain level of catchy flavor is the ample amounts of funk added into them. “Figure it Out” has an almost jazzy vibe flowing through it. The melody features instrumentals that sound like light trumpets and a chilled-out piano.

The reason why the jazz merely “attempts” to make these songs catchy is because of the drab speaking moments Khalifa crams into the tracks. It seems as though Khalifa has no one in his life to prattle to, because he added aimless and unnecessary dialogues into his songs that last for minutes on end. The chats are not even spoken to the rhythm of the beat, they are just random. In the song, “Plane 4 U,” Khalifa records himself talking on the phone with a lover. He explains to her his whereabouts and that he is planning on picking her up from her house. This phone call lasts for over a minute and warrants a skip right over the song.

In rare instances within the mixtape, the speaking is redeemed by groovy bliss brought to you in part by the composition of the melody. That phenomenon can be found in the song “Long Way To Go.” A simple, soft cymbal is lightly played with sounds of puffing smoke in the background. The sound gives a shimmering, warm feeling as it introduces some of Khalifa’s commonly used sound effects which include deep inhales and satisfied “ahs.” Despite some annoying narration, such as the rapper’s classic “yeahs,” the song represents a refined vibe.

Speaking of stoners, Khalifa is renowned for his affinity toward pot. The rapper, who even sells paraphernalia, such as his own brand of rolling papers and trays, throws in a potent amount of marijuana references in Laugh Now, Fly Later. After a long introduction featuring someone walking to and starting their car in “Royal Highness,” a sound of a clicking lighter and a long exhale kick off a relaxed drum beat. The song “Weed Farm” has even more explicit references to Khalifa’s favorite topic. The rapper repeats several times within the track how he is “In my weed farm” and “rolling up another joint as soon as the weed’s gone.”

If anything, Laugh Now, Fly Later caters to stoners and no one else. The beats are intricate, but a little bit too slow and repetitive to dance or pregame to. The long monologues or sounds of someone walking or driving do not add very much to the overall appeal of the songs, but can be desirable to hear in a dazed state of confusion and/or euphoria. The moody, bluesy undertones that emanate alongside the thumping, mainstream dub-step make this compilation of music unique, yet extremely far out.