Review: ‘The Rape of the Sabine Women, by Grace B. Matthias’ 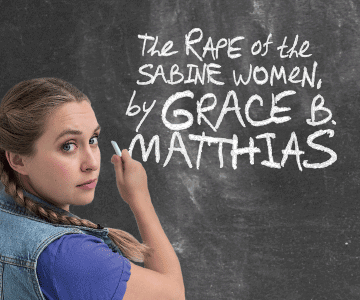 The Rape of the Sabine Women, by Grace B. Matthias

The past month has proven that “power in numbers” is more than just a phrase. Back in October, after The New York Times broke a story about director Harvey Weinstein paying off sexual harassment claims for decades, numerous Hollywood actresses came forward accusing Weinstein of sexual assault, abuse and misconduct. Since then, other actors, filmmakers, comedians, politicians, journalists and CEOs have been accused of similar actions.

#MeToo went viral when millions of people, mostly women, used it to share their stories of experiencing sexual assault. The saturation of these stories throughout the news and social media has given women the courage to speak out about their experiences. The sheer number of stories being shared has shown the scope of the issue and has given it attention that is long overdue. Needless to say, the issue of sexual assault has been on everyone’s minds, unless you literally live under a rock.

The Local Theater Company’s production of The Rape of the Sabine Women, by Grace B. Matthias could not have come at a better time. The play is about a 15-year-old high school student, Grace, who is raped by a member of the school’s football team. The plot follows Grace’s experience as a rape victim in a small town that worships high school football and cable news. In class, Grace learns about the Roman myth, “The Rape of the Sabine Women,” which fascinates her. The myth tells of the men of Rome leading a mass abduction of women from surrounding cities and taking them as wives in order to continue the Roman bloodline. Grace finds herself feeling increasingly empathetic towards the Sabine women as she struggles to come to terms with her new reality. The play boldly addresses the different elements of rape culture like victim-blaming, toxic masculinity and the power of the media.

The play incorporates humor and metaphor to illustrate the social power of rape culture in America. Grace’s rapist, football star Jeff Johnson, and his teammate, Bobby, are portrayed as hypermasculine. Bobby, who is extremely homophobic and closeted, rejects anything that he doesn’t consider macho, like art, poetry and errands. He says, “I’m not gay” so much that it becomes ridiculous.

There is a section of town that is called the “dump” where all the trash goes and is set on fire. There are moments throughout the play when characters mention the smell of smoke. When Grace sees on the news that the local fire department is hiring, she becomes determined to be a firefighter.

By the end of the play, it is clear that fire is a metaphor for rape. Grace finds out through her friend Monica that almost all the girls in the town have been raped, but they keep quiet about it, unlike Grace, to not cause problems. It then becomes clear to Grace that her problem is a bigger problem — the whole town is on fire.

The Local Theater Company’s artistic director, Pesha Rudnick, says the goal of the company is to discover, develop and add to the canon of American plays. Rudnick said she did not anticipate the play’s level of relevancy, especially this month. Her goal for this play was to shed light on an issue that has existed for 2,500 years.

“My goal was to explore the issue with humor and levity but also the seriousness of how prevalent it is, both in our community and beyond, on a national scale,” Rudnick said.