Opinion: Eminem needs to chill out 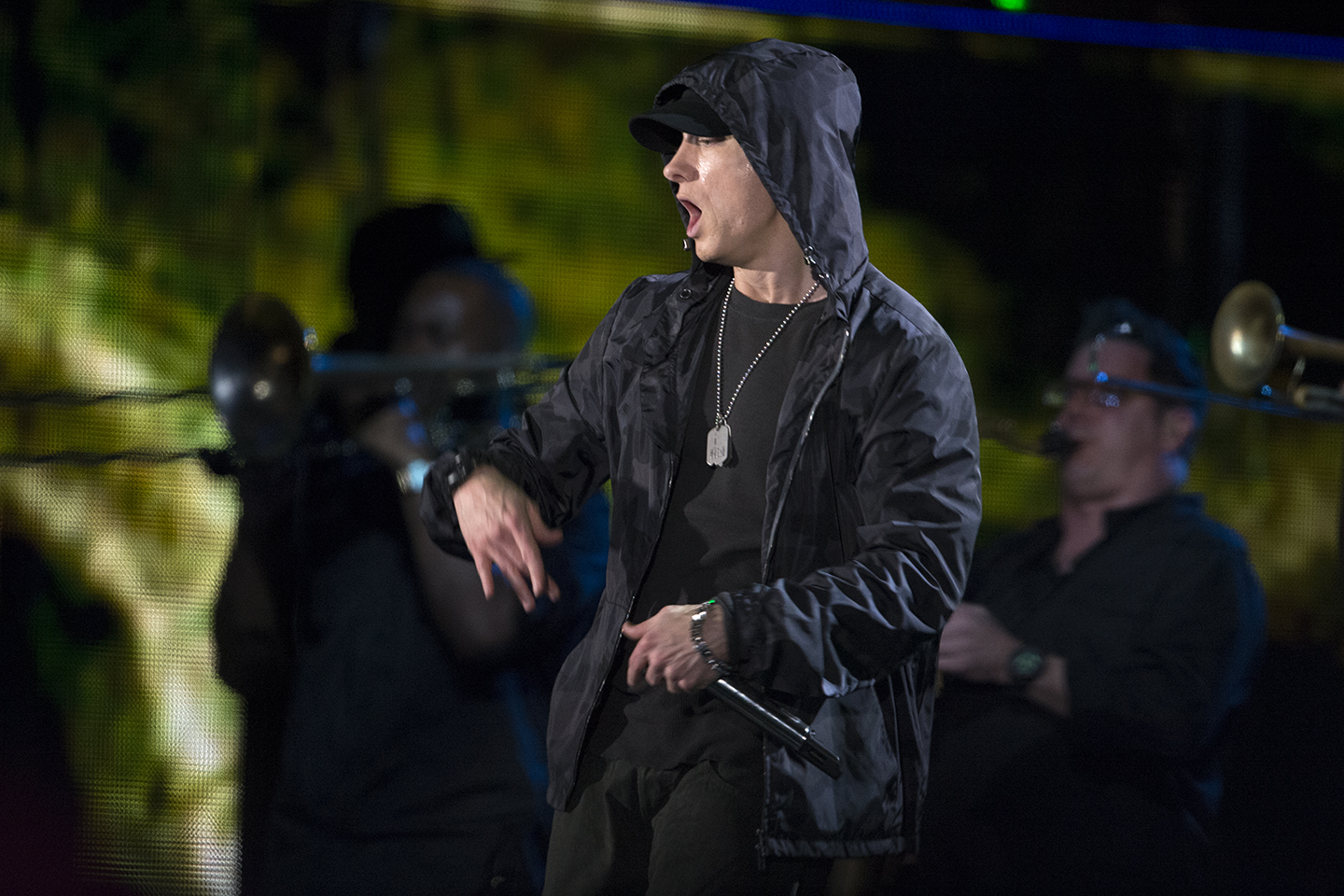 Eminem has no place in hip-hop.

Not only are his lyrics trash, his treatment of women is abysmal. He may be the worst rapper in history — and he is undoubtedly an even worse person.

Eminem’s lyrics promote misogyny, domestic violence and murder to an audience dominated by angry teenage boys. They are also heavily transphobic and homophobic, and were conveniently released just as gay marriage was becoming legalized in the United States.

Though his career peaked in the 2000s, he continues to make splashes in pop culture. Most recently, he rapped a Trump-bashing song called “The Storm” at the BET Awards. A straight, white male, someone with the utmost privilege in our society, used his fame to speak out against Donald Trump — that’s great, right?

His lyrics referenced Trump’s campaign promise to build a wall between the U.S. and Mexico border, and Eminem wanted to “[throw] that piece of shit (Trump) against the wall ‘til it sticks.”

Using graphic violence against the president of the United States is counterproductive and further fuels Eminem’s image of an instigator and attention-seeker.

In 2015, Eminem released a rap bashing Caitlyn Jenner with the lyrics “I see the bitch in you, Caitlyn / I keep the pistol tucked like Bruce Jenner’s dick.”

He has a history of using words such as “dyke” and “faggot,” yet claims he doesn’t mean to offend anyone in the LGBT community. Is it that hard to simply avoid using those words, if he really doesn’t mean any harm? Anyone who considers themselves an ally with the LGBTQ community would not use this kind of hateful language towards it.

Furthermore, his threats against, and mistreatment of, women isn’t a recent trend. It has gone on for the majority of his career. In a freestyle rap posted to YouTube in 2014, Eminem rapped, “Bitch, I’ll punch Lana Del Rey in the face twice.”

This came 16 years after one of his most controversial songs ever released, “Kim.” The lyrics to the song talk about how badly his ex-wife hurt him, despite his continuous cheating on her. In the last verse, Eminem says:

“You can’t run from me, Kim! It’s just us, nobody else

You’re only makin’ this harder on yourself

Here, I’ll scream with you, ‘Ah, somebody help!’

Don’t you get it, bitch? No one can hear you!

Now shut the fuck up and get what’s comin’ to you!

You were supposed to love me!

When did we, as a society, decide that this rapper — who openly talks about brutally beating a woman until she is bleeding — is worthy of fame and attention?

Paula Deen’s racist remarks, Kathy Griffin posing with Donald Trump’s severed head and Kendall Jenner facing scrutiny after her Pepsi commercial — these are all instances in which women have been ripped apart by pop culture, so much so that they lose a major part of their following and, in Griffin’s case, her job.

Why hasn’t Eminem faced similar consequences while exercising his First Amendment rights, even though he blatantly talked about murdering his ex-wife? His demographic, mostly adolescent boys, grow up listening to misogynistic, homophobic, transphobic and violent lyrics.

In 2014, Anthony Elonis was convicted by the Supreme Court for posting a rap song that contained threats against his wife, the police, a kindergarten class and his coworkers on Facebook.

Elonis’ lyrics about his wife said, “There’s one way to love you but a thousand ways to kill you. I’m not going to rest until your body is a mess, soaked in blood and dying from all the little cuts.”

He was convicted because his song displayed the intent to harm these people, although the Supreme Court ended up overturning the conviction later due to his speech not having a “true threat.”

This is an example of someone’s speech coming off as so threatening and so scary that the highest court in the United States took on its case. There aren’t very many differences between the content of Elonis’ rap and Eminem’s “Kim.”

Eminem’s rapping style is nothing more than spitting anger into a mic —  his performances are lazy, offensive and unnecessary.

Art is a form of free speech, and therefore it is protected under the Constitution. However, due to the lack of artistic merit in Eminem’s music, the violent and discriminatory messages in his songs should not be protected. Going back to Elonis v. United States, Elonis’ music was, in his mind, art — but the messages in it were deemed so disturbing that the Supreme Court intervened.

Obscene material is unprotected by the First Amendment. In order to establish obscenity, three things must be considered:

My final verdict: Eminem is a bad person who will say anything for attention and is harmful to any society trying to become more progressive and socially aware. It’s time to let him fade into total irrelevance.