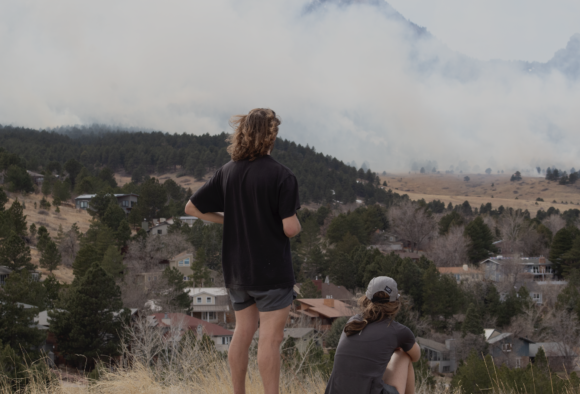 On March 26, 2022, a small fire broke out in the open space next to NCAR in South Boulder around 2 p.m. Hikers and residents were asked to evacuate the area immediately.

The range of evacuation orders currently contains 19,000 people. Table Mesa, Martin Acres, portions of the Frasier Meadows and Eldorado Springs were ordered to evacuate in addition to the NCAR area. Those ordered to evacuate can go to the East Boulder Community Center located at 5660 Sioux Drive, pets are welcome.

Linn Barlow, a 10 year resident of Boulder County, waited in the community center parking lot around 7 p.m. She was taking inventory of the items she brought in her car and was waiting for news about her home, which was in the evacuation site.

“I brought my bills, my paperwork, my taxes (to the shelter) but the first thing I got was my kids’ family photos,” Barlow said.

10 people had checked into the shelter on Saturday evening, with another dozen staying in the parking lot, according to Sarah Huntley, the director of communication and engagement for the City of Boulder.

A pre-evacuation warning was put out by the Boulder Police Department to the following areas: west of Highway 93, north of Eldorado Canyon State Park, the east side of Walker Ranch Open Space and south of Greenbriar Boulevard. The university sent out an alert at 3:40 p.m. saying for students, faculty and staff to check their phones for evacuation orders.

Brian Oliver, the woodland division chief for the City of Boulder Fire Rescue said in a press conference that crews will be “mopping up and dealing” with the fire for the next several days due to dense dry grass and trees in the area.

Oliver said that the city of Boulder gave a training last spring in one of the evacuated neighborhoods. He believes this led to the “success of the operation.”

At 7 p.m., the fire was 122 acres was still zero percent contained.

Evacuated areas still have power, according to the Boulder Office of Emergency Management.

A little after 5 p.m., Gov. Jared Polis said on Twitter, “We are thankful for the swift action and response to this wildfire by our firefighters and first responders.”

Polis also shared in the tweet that the state had deployed two aircraft, a single-engine tanker and a type two helicopter.

Oliver believes firefighters have a chance to contain the fire in the evening as wind speeds lessen and the air pressure changes.

According to OEM, community members may call Lisa Bitzer at 303-725-4160 for bus service to the evacuation point. Boulder County Fairgrounds located at 9595 Nelson Road in Longmont, is now accepting large animals and the Humane Society of Boulder Valley located at 2323 55th St. in Boulder can accept smaller pets for shelter and care.

Residents can check the Boulder Office of Emergency Management’s website for more updates.

The Boulder County Public Information Call Center is open for more information at the phone number 303-413-7730. The call center will close at 10 p.m. but will reopen tomorrow morning at 9 a.m.

Henry Larson contributed to this story.