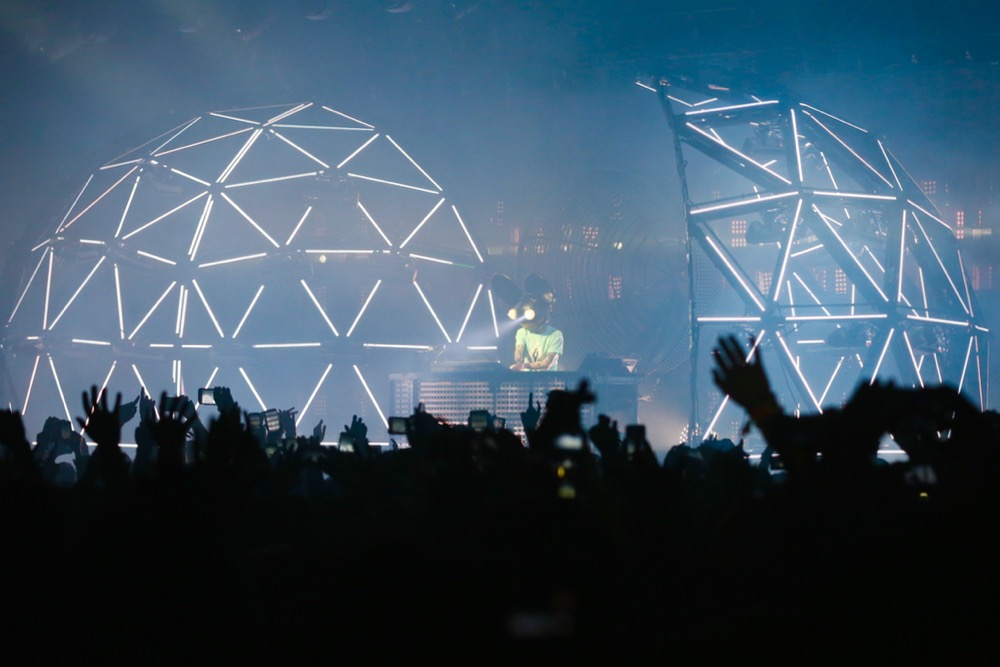 “I love Colorado,” the mouse-masked DJ yelled out to an energetic crowd.

“But I love Rocket League even more,” he interjected as he continued his set paired with visuals of the popular vehicular soccer video game. With almost 20 years of experience behind the turntables, six Grammy nominations and four DJ Award wins, Joel Zimmerman doesn’t have anything more to prove. As an electronic icon, Zimmerman, better known as deadmau5, has a lengthy history of packing stadiums with people beyond excited to see him.

Last Thursday’s show at Red Rocks, proved to be another great example. A wide variety of people packed the amphitheater to dance to deadmau5’s variety of progressive house hits in a show that could have rocked the red off the rocks. Most attendees wore glow stick mouse ears similar to the ones on the DJ’s controversial helmet. (Disney and the DJ once had a legal dispute over the mouse ears on his helmet which has since been resolved.)

EDM concerts can consist of a crowd of people dressed in unusual outfits that seem to completely ignore the weather. Some are on substances they probably wouldn’t want their parents to know about.

At Red Rocks, people dressed in onesies, basketball jerseys (probably bought off AliExpress) and even fishnet stocking and shorts braced the 45-degree weather for the sake of EDM tradition. Throughout the aisles, small plastic bags that most likely once contained MDMA or cocaine coated the ground. In the front rows, people wearing gloves with LEDs at the fingertips can be seen scouting individuals and waving the gloves slightly in front of the victim’s dilated pupils shortly after.

The crowd also starts to get older as you travel towards the back of the venue. Not nearly as many of them are on hard drugs as the front rows.

All the way at the top of the venue, few young people could be found again laying on the steps of Red Rocks staring out at the sky while deadmau5 performed.

Like any EDM show, two elements that contribute to the experience are the quality of the sound and the visuals that enhance it. Deadmau5’s dance music took from a variety of genres such as old-school techno, house and trance. He performed some of his top hits such as “Strobe,” “Raise Your Weapon” and, of course, “Ghosts n Stuff.” The second the distorted organ started his audience went nuts. The DJ flailed his arms during each chord like one of those inflatable men at a car dealership. Middle fingers on his LED cube platform were bouncing up and down right before the beat dropped. A deadmau5 inspired cow started dancing in their place, one of his many wacky animated visuals.

For EDM fans, deadmau5 is an essential to see live. Shows like the one he did at Red Rocks prove why he’s so influential to the electronic genre. Hopefully, a potential part three of his Lots of Shows in a Row tour has a stop in Colorado.