Review: ‘What Made Maddy Run’ by Kate Fagan 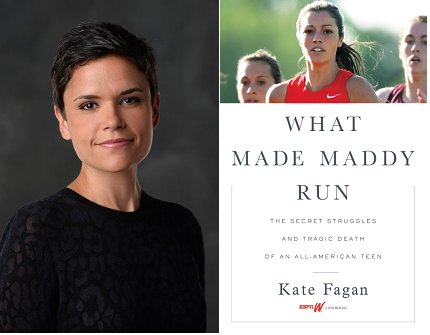 ‘What Made Maddy Run: The Secret Struggles and Tragic Death of an All-American Teen’ by Kate Fagan

What Made Maddy Run: The Secret Struggles and Tragic Death of an All-American Teen by Kate Fagan is a powerful look at the difficulties of adjusting to college life, especially for atheletes with mental illness.

Fagan, a CU alumna, delivered the school’s commencement address in May. She is a sports writer at ESPN, where she contributes to Around the Horn and co-hosts the podcast “Free Cookies.” Her first book, The Reappearing Act, is a memoir about coming out while she played on CU’s women’s basketball team.

What Made Maddy Run is adapted from a piece Fagan wrote for ESPN in 2015 called “Split Image” about Madison Holleran, a track runner at the University of Pennsylvania who who took her own life in the winter of her freshman year. The book is a more in-depth profile of Holleran, with information about how social media, stress and college sports can affect students’ mental health.

Holleran was a talented soccer and track athlete at her New Jersey high school. She went to the University of Pennsylvania to run for the school’s track team. She was excited about school and had no record of mental health issues before college. After starting school, she struggled to enjoy college life and began to dread track. Holleran talked with her friends and family about feeling trapped and miserable. She started seeing a therapist and over winter break her family encouraged her to quit track or transfer to a different college, but ultimately she decided to stick with both for another semester. She killed herself in January 2014.

Fagan’s book follows Holleran through her short time in college and documents her rapid decline in mental health as pieced together by friends and family. It also examines her social media presence, which hid any evidence that Holleran was struggling. Throughout the book, Fagan suggests that the desire to present a façade of happiness to the rest of the world, now extremely easy with the rise of social media, prevents people from seeking help.

College is mythologized as being a time of freedom and excitement, but for many college students, the transition into college is very difficult. Many new students struggle with feeling isolated and adrift and have a hard time finding their place. For student-athletes, this is compounded by the difficulty of adjusting to college sports.

As Fagan writes in her book, many college athletes were the top athletes in their high schools, sometimes even their state. Competing in college as only one among many top performers can be incredibly disorienting, especially for those whose sense of self-worth is closely tied to athletic performance. If student-athletes’ self identity is connected to athletic prowess, the shift can be incredibly destabilizing during a time of life that is already marked by so much change.

What Made Maddy Run was an engrossing read and I had a hard time putting it down. I found myself being pulled into Holleran’s world and though I knew how her story ended, it made finishing the book that much sadder. I did not know much about the issues affecting student-athletes beforehand and I am grateful to Fagan for providing a compassionate and in-depth look at the unique struggles they face in college, along with all other students struggling with mental health.

A former student-athlete herself, Fagan was the right person for this story. Covering an issue as sensitive as a teen suicide is no easy task and Fagan’s compassion and desire to prevent more students from following Holleran’s path shows in her writing.

I would recommend this book to anyone who wants to be better informed about mental health issues among college students. The more people are educated about the issue, the better we can create an environment of recovery and support.