Book review: ‘Turtles All the Way Down’ 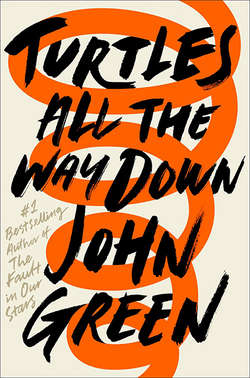 ‘Turtles All The Way Down’ book cover. (Photo courtesy of Dutton Book for Young Readers)

John Green’s newest novel, Turtles All the Way Down, was released on Oct. 10, 2017. I was expecting the book to be similar to his other stories and it was, to an extent. But I was pleasantly surprised. Another teenage girl sits at the center of the narrative, but she is facing issues that come across in a different way than in Green’s other books. The tone of this piece is much darker than what Green has written in the past. Though I enjoyed the humor in his other works, I wouldn’t have it any other way.

Turtles All the Way Down tells the story of Aza Holmes, who suffers from severe anxiety and obsessive-compulsive disorder (OCD). She falls on the deep end of the spectrum, where her anxiety and OCD are very tough to deal with. Aza worries most about the bacteria that may or may not be in her body and what it could potentially do to her.

A huge part of the story is that Aza experiences intrusive thoughts. As readers, we get a look inside her head, in her most difficult moments. Usually, Green would interrupt these intense moments with a bit of humor. However, in these instances, Aza struggles to regain control and Green makes it clear that if Aza isn’t able to catch her breath, neither will we. When Aza was panicking, I found myself mirroring her — my mind started racing and my heart beat faster. I attribute this to the beautiful way Green wrote her thought process.

The story took a little time to get going.  A billionaire suddenly disappeared, just before the police came after him for fraud and bribery with a $100,000 reward on his head. Aza quickly gets caught up in the mystery, when her best friend Daisy remembers she used to know the son of the missing man, Davis.

After meeting Davis, the pace picks up. Aza and Davis become friends and bond over the search for their identities. Davis hopes he is more than his money, and Aza hopes she is more than her thoughts. Their friendship soon develops into something more, but becomes rocky when Aza can’t bring herself to kiss Davis, even though she really wants to. While Aza is facing these challenges, she and Daisy continue to search for the answer to the mystery.

I was so invested in this story that I didn’t put the book down until I had finished. It sparked intense emotions and pulled at my heartstrings. It gave me insights to things I had never experienced, which was valuable. I have never experienced a panic attack or the level of anxiety that Aza experiences. The internal dialogue that Green provides gave an idea of what it might feel like. These mental health issues are becoming more visible and discussed these days. Being able to understand, even a little, what those experiences can be like is important. And in the moments where I didn’t feel I could connect to Aza, Green provided me with characters that could help bridge the gap.

For readers who find it challenging to understand Aza, despite her internal dialogue, there’s Daisy and Davis. They see what Aza is going through from the outside, like the readers do. They struggled to figure out what exactly Aza is experiencing, even if Aza explains it. It was nice to have characters to relate with that had my level of understanding.

References to other works, such as Star Wars and quotes from well-known writers, actors and more were a unique way to bring important ideas to light. Daisy is an avid Star Wars fan and writes fan-fiction, which includes a character based on her best friend. Davis uses a blog to process what is happening in his life, using quotes to start each entry. They present readers with further connection to a story that may be difficult to connect with.

Though I was a little skeptical at first and didn’t know what to expect, I would recommend this book. It provides a deeper understanding of things I usually would not even begin to grasp. It certainly did not contain as much action as I anticipated, considering the mystery. Once I got into it, that didn’t bother me. There was so much going on inside Aza’s head, it made me realize there were more layers to the adventure than I thought.