Former Reagan official talks nationalism in the age of Trump 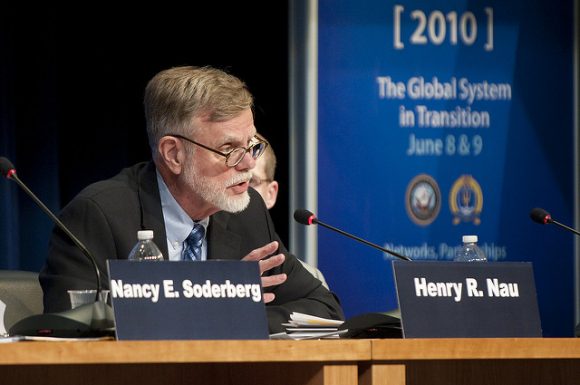 Nau is a rare find in academia — a conservative internationalist who believes American nationalism paved the way for a world of greater equality. American nationalism is built upon self-governance, open markets encouraging importing, ethnic diversity and open immigration policies and freedom of religion.

He believes that Trump may present the U.S. with an opportunity to return to its own national interests, while still maintaining its involvement in global affairs. He agrees with Trump that we should demand more from our allies and insist NATO members pay their fair share. Trump did just that at his first NATO address, while still reaffirming Article 5 by sending troops to the Slovak countries bordering Russia.

“Trump’s nationalism may be perfectly tailored … to consolidate the enormous gains we’ve made in the past 75 years,” he said.

He wants the U.S. to maintain the peace currently present in the world, while being careful with trying to spread that freedom, especially in areas like Afghanistan and Iraq. We need to be careful of nation building and avoid the pitfalls of spreading directly our American ideals, he claimed. He agrees with Trump’s insistence that NATO members invest more in defense spending and that they live up to their commitments as they did after 9/11, when they offered to enforce Article 5 with the U.S.

Nau’s proof that Trump’s tactics may be working?

“The times in which that we can totally rely on others is too some extent over,” German Chancellor Angela Merkel said, addressing a 2,500-strong crowd in the Bavarian capital after the NATO and G7 summits. Nau thinks that this foreshadows a good global change in how our allies work with us.

Nau had many caveats to Trump’s international policy, including Trump’s consideration of ending the free trade agreement with South Korea and his economic dealings with China. Despite this, Nau holds hope in a world defined by international partnerships and the protection of freedom — a world that could possibly be brought about by President Trump.