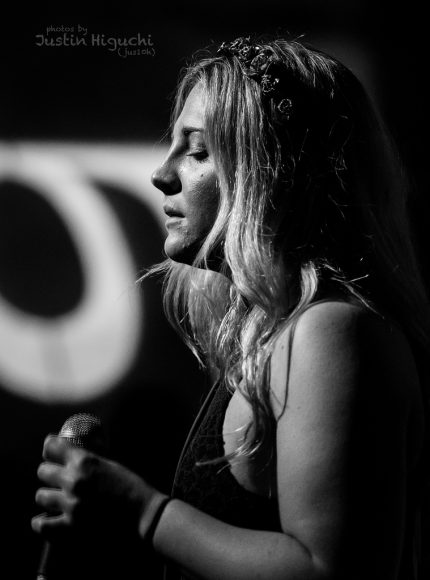 ROZES’ performance at the Larimer Lounge Tuesday can only be described as unreal. What seemed like an odd fit, an EDM staple at one of Denver’s most notable punk and alternative rock venues, was easily overlooked the second she started singing.

Accompanied by an equally talented multi-instrumentalist, she had everyone’s attention. Even those at the bar who came to watch the Cubs-Dodgers game were constantly leaning back on their stools to watch.

She opened her show with her single “Under the Grave,” released late last year. Her arena-worthy voice that could be heard from across the street combined with the genuine, emotionally driven performance made the song nothing short of entrancing. Throughout the show, she performed with that same level of authenticity, along with high energy and charming stage presence.

Her skilled accompanist was a sight to see as well. She constantly switched from one instrument to another and at one point drummed on the ceiling. On one song she jumped on the drums while performing a guitar solo.

She finished her set with “Roses” and “All of Me,” both of which were beyond phenomenal. It was hard to see her during these songs as every phone was out, blocking any clear view. As the phones started going away, she was again visible and jumping around stage before the show came to a close.

ROZES is a rare kind of performer in today’s music world and has seen immense success since releasing her first single in late 2014. Her best quality, aside from her unbelievable voice, is how authentic and honest she is. For those who missed her, start checking the Red Rocks website because that’s where she’ll probably be performing the next time she’s in Colorado.