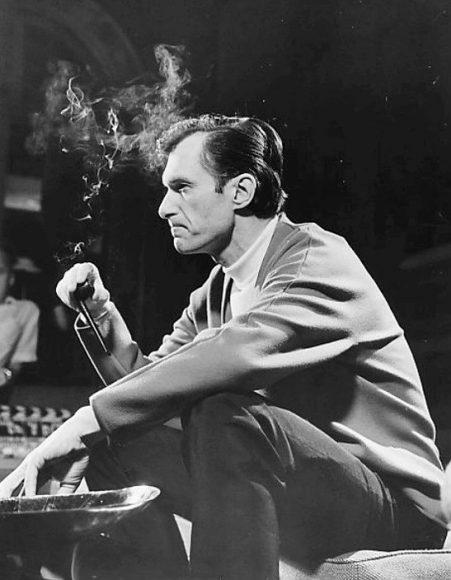 Often compared to Jay Gatsby, Hugh Hefner was a famous and wealthy American bachelor, businessman, philanthropist and editor-in-chief of Playboy magazine. Born  April 9, 1926, during the Prohibition era in Chicago, he started Playboy in 1953 with little more than small investments from family and friends. His first cover featured Marilyn Monroe, whom he had never met. It sold over 50,000 copies.

Since the 1960s, Hefner (Hef) has been a pioneer for socially progressive issues such as LGBTQ rights, women’s sexual liberation, anti-segregation, racial equality, abortion and reproductive rights. However, many of his critics say that he supported these issues and rights for his own benefit — to them, his activism was self-serving and gave him the ability to date many of his Playmates. He even married one.

Hef has been critiqued for participating in the sexual celebration of women with the sole purpose of appeasing straight men, including himself. He is charged with idolizing young, thin, bikini-clad women with little variation in body type or age. His empire is built on images of idealized women’s bodies, which critics say has played a major part in the objectification of women into nothing more than sexual beings created to please men.

On the other hand, his supporters say that he will be remembered “as an icon of the sexual revolution and a supporter of free speech.” A tweet from Larry King states that Hef “was a GIANT in publishing, journalism, free speech and civil rights.” Hefner was a pioneer in celebrating sexuality during a time it was meant to be suppressed, especially for women.

In a 1992 New York Times interview, when asked what he was most proud of, Hef said that he “decontaminated the notion of premarital sex” and that “gives [him] great satisfaction”, as well as “[changing] attitudes towards sex” in a time when it was a taboo subject.

Hefner’s intention was to portray the women in his magazines as “the girl next door [more than] sex objects.”  He never saw a contradiction with selling images of nearly naked women in a magazine that also featured articles about reproductive rights, equal rights and contraception.

In fact, he vehemently “promoted the free exchange of thoughts and ideas,” and advocated for birth control access, pro-choice movements and gay rights.

Hefner was against censorship of all kind. He bought back Playboy franchises when they showed signs of only accepting white women, due to his strong anti-segregationist beliefs. Civil rights leader and reverend Jesse Jackson called Hef “a strong supporter of the civil rights movement”. Hefner “hired men and women of all races,” and encouraged female employees to attend college with full tuition reimbursement.

Furthermore, Hefner played a major role in the Vietnam War. One soldier even claimed that an issue of Playboy “folded in his chest pocket had prevented a bullet from entering his heart”, thus saving his life. He said, “Playboy [was] by far the biggest morale booster in Vietnam.”

Hefner shocked many, especially when he was at his peak. He encouraged women to be independent and pursue college degrees when they were expected to be homemakers and good wives. He celebrated sex in a way that allowed men and women to be open about their own sexualities, and reversed negative notions surrounding premarital sex — something that is, today, far more acceptable.

In a world where straight, white men are grouped with conservative and anti-feminist ideals, Hefner stood for anti-segregation, equal rights for women, abortion rights, reproductive rights, birth control and the LGBTQ community. He also donated many of his earnings to the Democratic Party and Barack Obama’s re-election campaign.

Hefner, in part, pioneered the newest wave of feminism — advocating both women’s sexual freedom and ability to express their bodies however they want, as well as respecting women’s choice to be conservative and reserved. He created an empire built on celebrating women’s sexuality and physicality, regardless of race — something that has yet to be done to that extent by anyone else, and something that had never been done before.