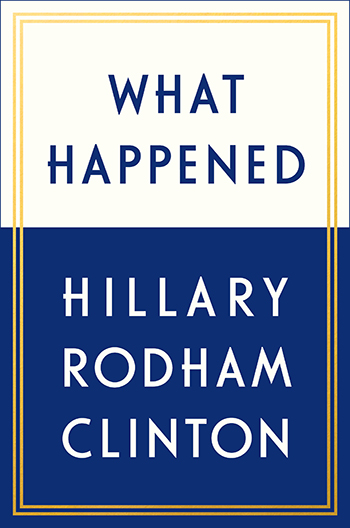 Hillary Clinton’s newest book, What Happened, was released Sept. 12, 2017. Most people say it is a scathing take-down of President Trump, Bernie Sanders and the modern news media. And in some ways, it truly is. But in other ways, it is an apology to modern women, a conversation about self-doubt and regret and a list of to-do items of someone who is not and will not be president.

The book opens with Clinton recounting her experience at the inauguration — Trump’s inauguration. She fills the chapter with witty references to books like 1984 and Les Miserables. Like most of the book, this chapter is an odd balance of a casual, informal tone of someone who you could be having coffee with and a well-off intellectual who keeps making references to remind you they’re smart. This voice acts in two ways. First, it reminds me of why I couldn’t stand listening to Clinton’s speeches during the campaign. Second, it reminds me that she is a person with both things to love and a set of faults.

The next three chapters delve into Clinton’s political life and background. Of course, it included the same highlights from the campaign, such as working in Alabama, taking an entrance exam, her constant encounters with sexism and a summary of her family. These chapters fall into her political tone just like the introduction. Even when she includes jokes or personal anecdotes, they feel like something she would say to make her seem more personable.

These chapters also relay a sense of privilege. Clinton discusses her travels, lists her speech writers and PR agents and spends time talking about her hair and makeup crew. In some ways, these feel foreign and incredible to someone like me. I don’t know about you, but I do my own hair and makeup every day. At the same time, it made me realize the pressure put on politicians to always be one step ahead, to look good (like the time Nixon was considered to have lost to JFK because he looked bad on TV) and to be prepared for anything.

The most important chapter in the book is titled “On Being a Woman in Politics.” The chapter opens with, “In these pages, I put to paper years’ worth of frustration about the tightrope that I and other women have had to walk… But there is pride and joy to be found in this chapter, too.” This chapter focuses on the double standards of professional women, being pretty but not looking slutty, being smart but not being intimidating and being enthusiastic but not being loud or “screeching.” Basically, all the things that men can do without ridicule, that women can’t do.

I know for some people they’ll say that this is more of the same feminist BS that is everywhere in our society. Yes. I know. But for young women, there are so few powerful female role models. Even fewer still who are going to be open and honest in a 34-page essay about the struggles and triumphs of being a successful, “nasty” woman.

This chapter makes Hillary accessible to any woman who strives to be powerful one day. It also resonates with any woman that has experienced harassment or any uncomfortable situation involving a man. She writes:

“‘This is not okay,’ I thought. It was the second presidential debate, and Donald Trump was looming behind me. Two days before, the world had heard him brag about groping women. Now we were on a small stage, and no matter where I walked, he followed me closely, staring at me, making faces. It was incredibly uncomfortable. He was literally breathing down my neck. My skin crawled.”

Take away the politics for a moment and (try to) forget that it’s Donald Trump. This is the anthem of any woman who has felt on edge around a man.

The rest of the book focuses on what she would do as president — if she were president — and what she did wrong, even if she doesn’t necessarily apologize for it. She talks about gun violence, LGBTQ rights and financial restoration from 2008.

In “Those Damn Emails” she talks about all the things that simultaneously collapsed. She doesn’t apologize for using a server. And she shouldn’t — many politicians before her used one, and many still are. She does, however, criticize former FBI Director James Comey, The New York Times and the Republican committee, focusing on how they built up the issue to the point of a near national scandal.

“Trolls, Bots, Fake News, and Real Russians” focuses on the chaos of Russian interference and the news. While Clinton writes about the traditional media, she also focuses on the influx of poorly-sourced websites and Breitbart. She lists some of the latter’s ridiculous headlines:

“There’s no Hiring Bias Against Women in Tech, They Just Suck at Interviews”

“Hoist it High and Proud: The Confederate Flag Proclaims a Glorious Heritage”

“Fact Check: Were Obama and Hillary Founders of ISIS? You Bet”

These bemoan that good journalism is being dirtied by using the name “journalism” to label all sorts of garbage, which blurs out what really is the truth. She writes at the end of the chapter:

“What we are facing now — an attack on our democracy by our principal foreign adversary, potentially aided and abetted by the President’s own team — is much more serious [than Watergate].”

She wraps up the book with the closing moments of the election and her campaign, reflecting again on the people who supported her. The last section focuses on her commencement address to her alma mater, Wellesley. It ends with “‘What do we do now?’ I said. There was only one answer: ‘Keep going.’”

Let me level with you — I was a Bernie supporter. I mean, I live in Boulder, Colorado, after all. But when I realized it was Hillary or Trump, you better believe I was a passionate “HRC” supporter. This book makes me wish I had supported Hillary more from the start. It’s worth a read if you’re passionate about politics and if you hope to see the world become a better place. But if you’re understandably exhausted from it all, find the Sparknotes version.

Stephanie Wood is the Marketing Manager and Assistant Arts Editor. She is majoring in marketing, minoring in creative writing and pursuing three certificates: operations and information management, socially responsible enterprise and technology, arts and media.

What to watch and read for a spooky, socially-distanced...