In true storybook fashion, senior guard Haley Smith had a game to remember in her final home court matchup. Smith became the newest member of CU’s 1000-point club as she played her last game at the Coors Events Center as the Buffs took down Oregon, 76-66.

The Buffs dominated the first quarter of play. Colorado was led by Smith who recorded 10 points in the first quarter alone, shooting 50 percent from the field. Three other Colorado players managed to each record five points as the Buffs began to take a sizable lead over the Ducks.

Racking up 281 points this season, Smith knew she was flirting with milestone mark going into Sunday’s game.

“I definitely I knew it was getting kind of close and it was special to have a lot of family here, and do it on senior day and get to do it in front of the Buff fans, so yeah it was really special,” said Smith.

Sophomore guard Alexis Robinson proved a defensive power for the Buffs as the continued to dominate. At the end of the half, she managed three of the Buffs seven team steals, two of which she was able to punctuate with layups in the second quarter. Colorado led 42-25 going into the second half.

The Buffs finished the first half with three players scoring ten or more points. Smith led the team with 12 points and Robinson was right behind her with 11. Sophomore guard Kennedy Leonard also scored 10 points for CU and 8 assists moving into the second half of the match.

The third quarter proved to be a struggle for the Buffs. Oregon rode a defensive hot streak against the Buffs as Colorado committed a series of turnovers that the Ducks took advantage of.

Oregon cut CU’s lead to 12 before a major three-pointer from sophomore forward Makenzie Ellis with 1:52 left to play in the third. Colorado managed to hold off an Oregon surge heading into the fourth, still leading, 60-48.

Smith played for glory in her final quarter at the Coors event center.  A rebound followed by a layup and an and one gave Smith 21 points with 6:21 left in the game.

After fouling twice in quick succession with a few minutes left in the game, Smith powered through to reach 1000.  With 3:11 left in the quarter a Smith layup put her over the thousand point threshold in her 23rd in the game with the Buffs.

Both Smith and Leonard recorded double-doubles in the final home game. Smith had 23 points and 11 rebounds and Leonard finished with 13 points and 10 assists. Ellis and Robinson added 13 and 14 points, respectively.

The Buffs finished shooting a clean 50 percent from the field, making 28-of-56 shots, much better than in previous games this season. Colorado went 7-of-19 from deep but struggled at the free throw line, making 13-of-20 shots.

Oregon finished with a near-44 percent make rate from the field and edged Colorado in rebounding, 34-29.

“I don’t think there’s a ton of games where we are gonna shoot 50 percent the entire game, but we show we’re capable of it,” said head coach JR Payne. “We would love to score at that high of a clip each night, but we have to be able to defend to create that.”

The Buffs will hit the road this week to take on Washington on Thursday Feb. 23.  Tip off is scheduled for 9:00 p.m. (MST) 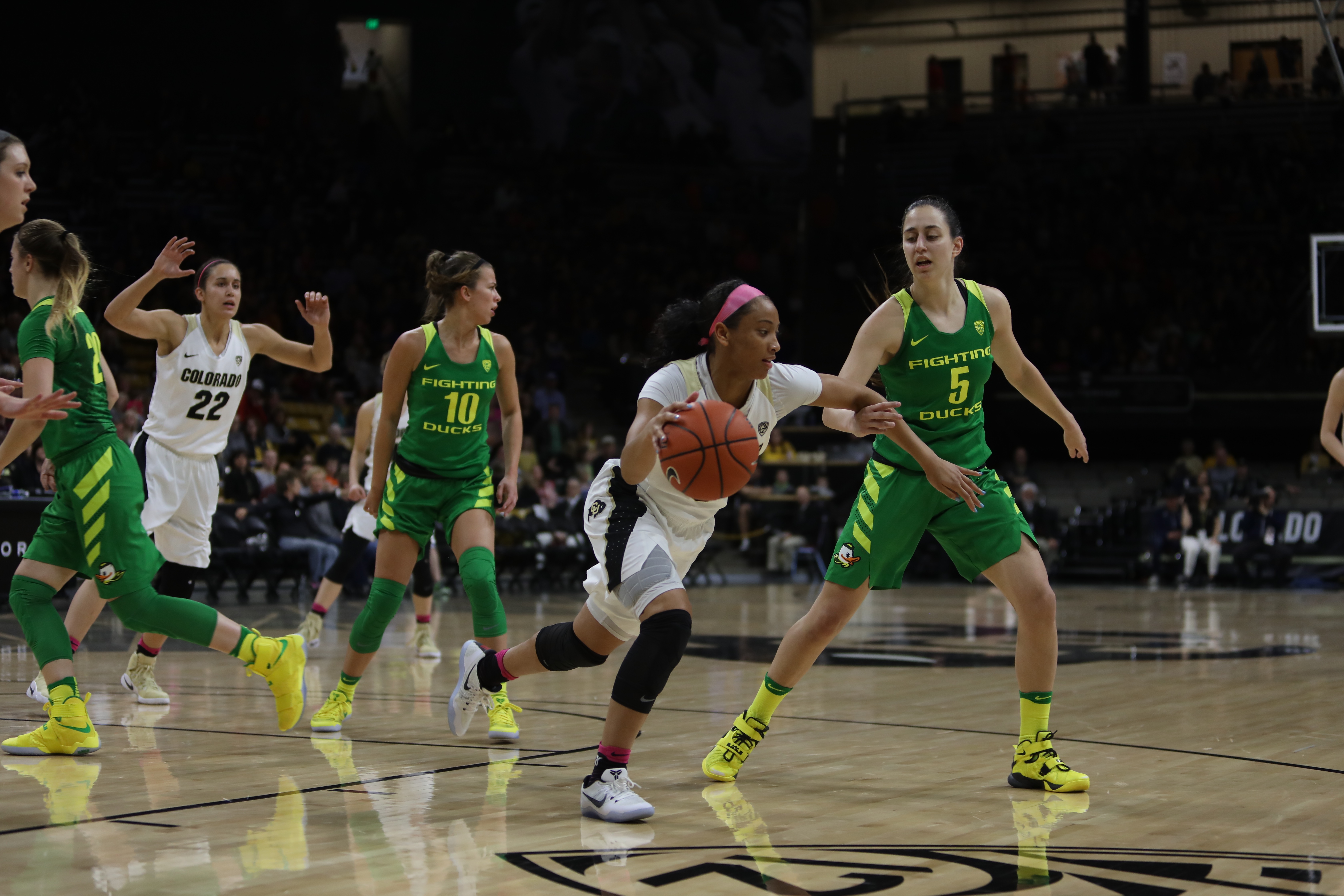 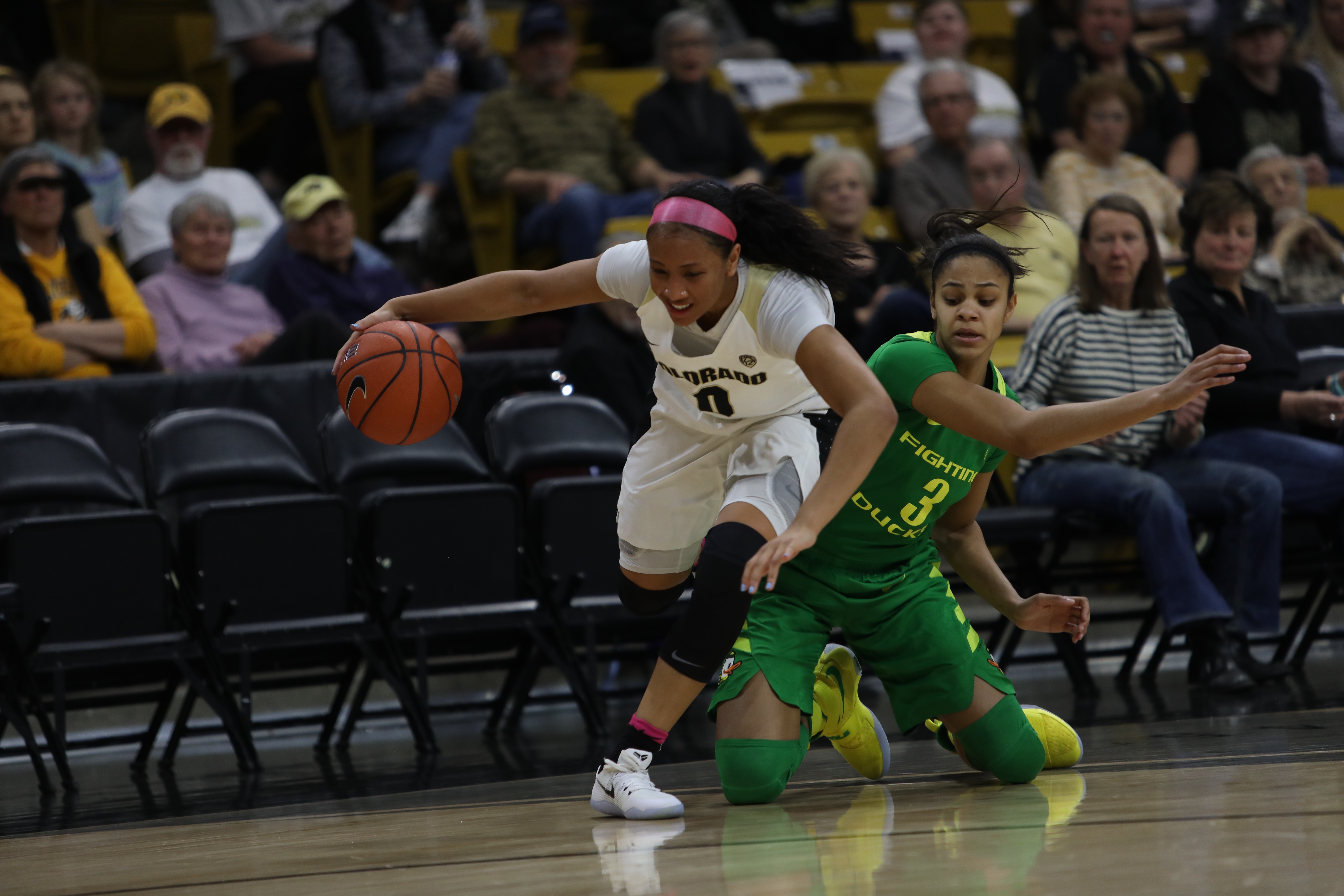 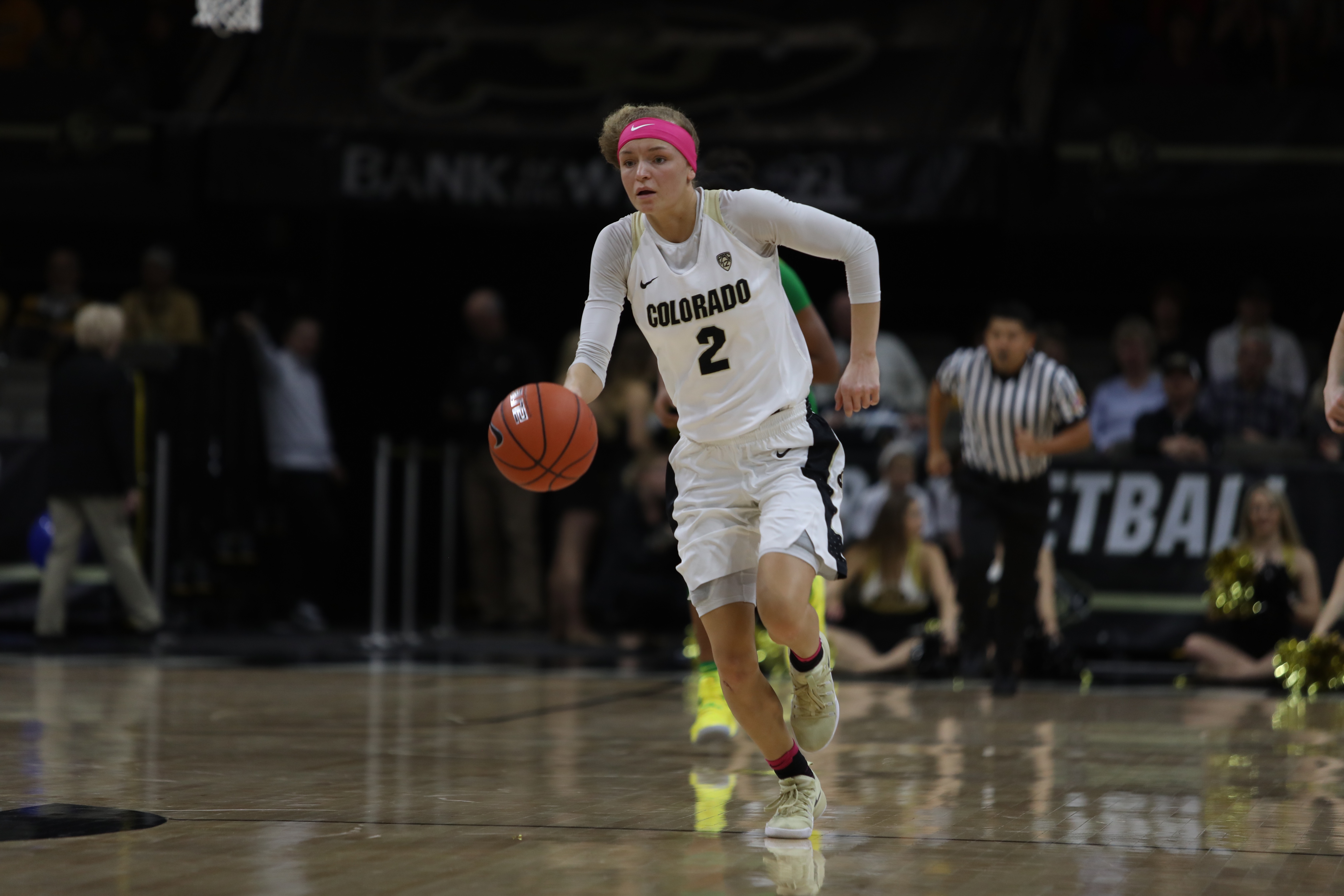 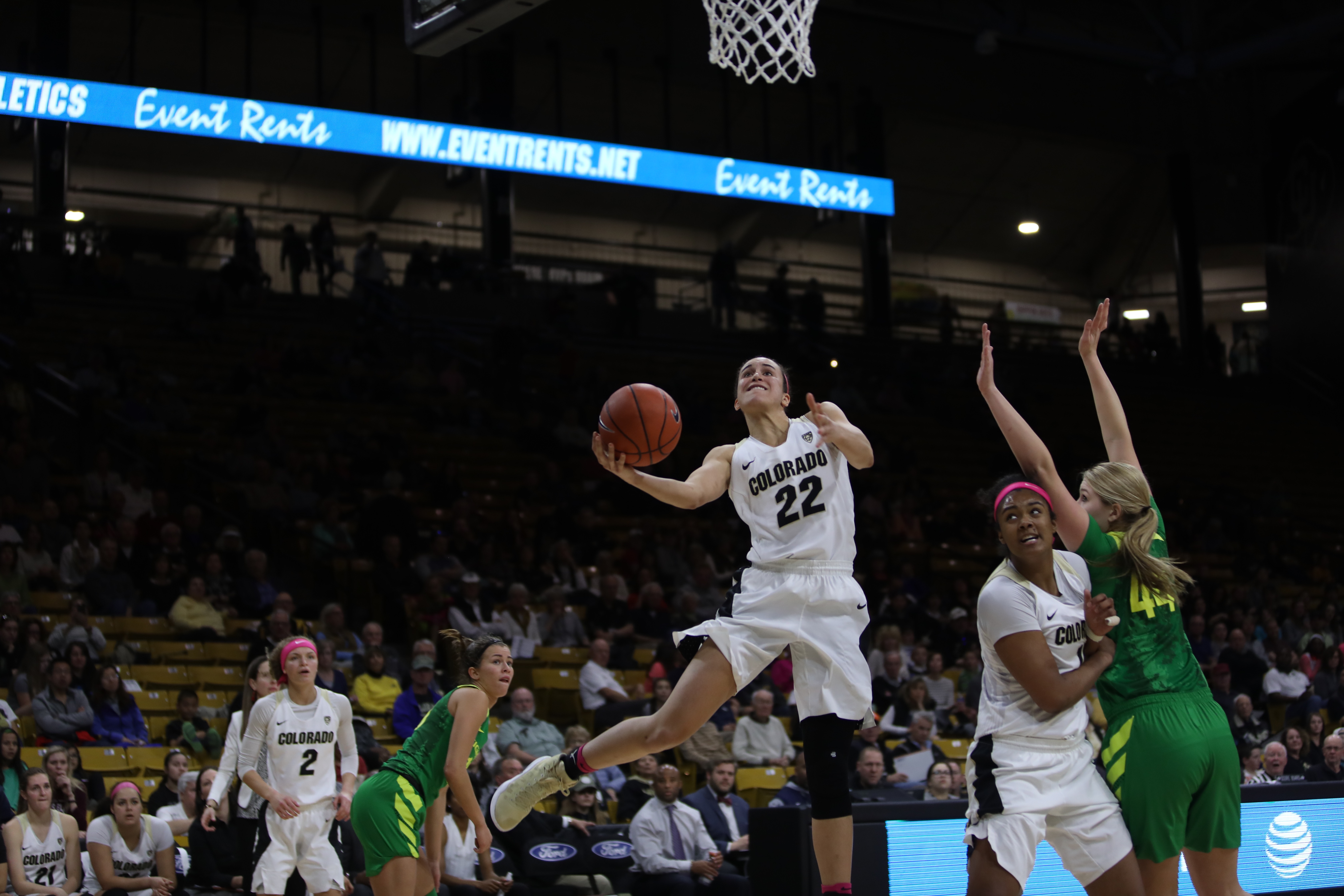 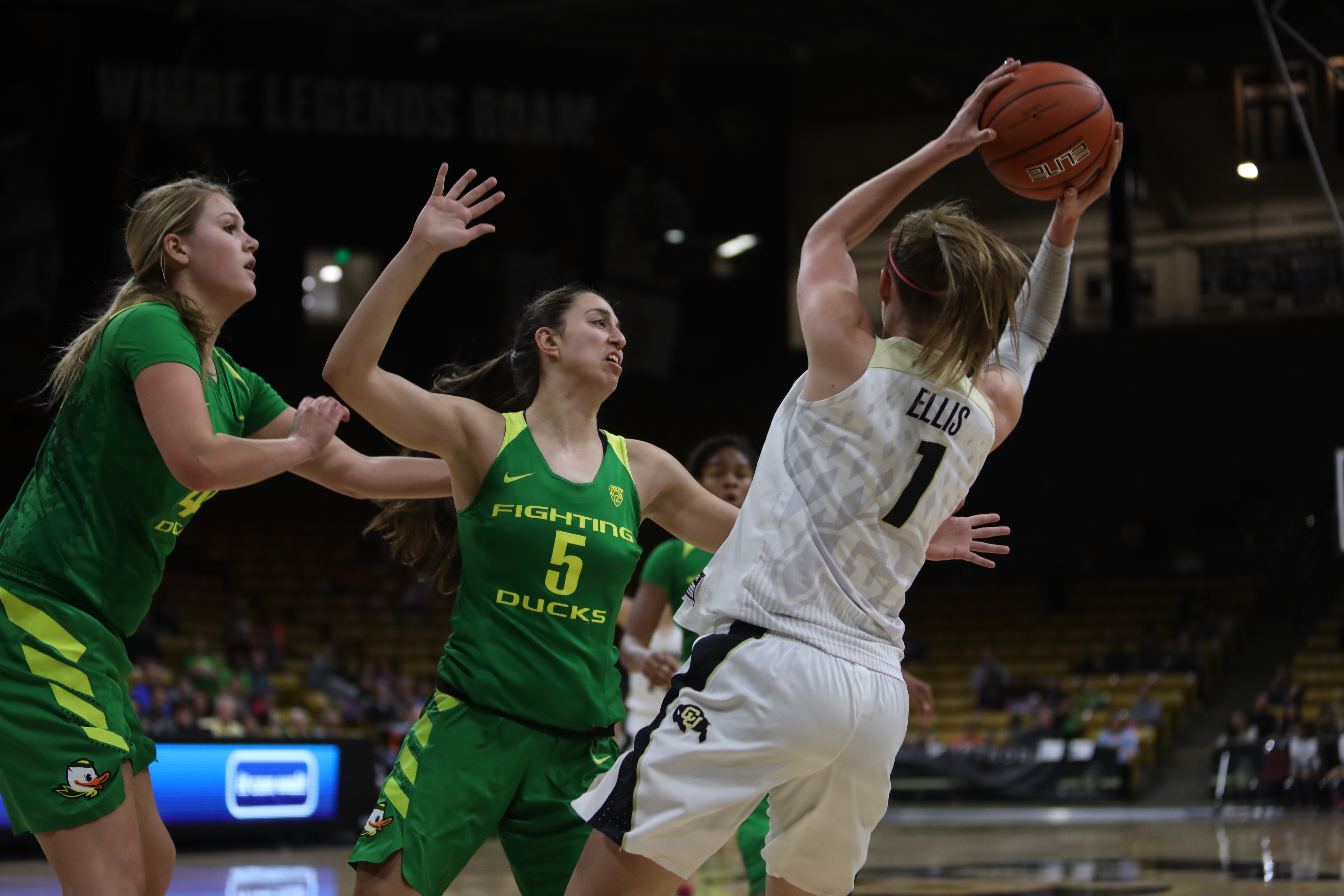 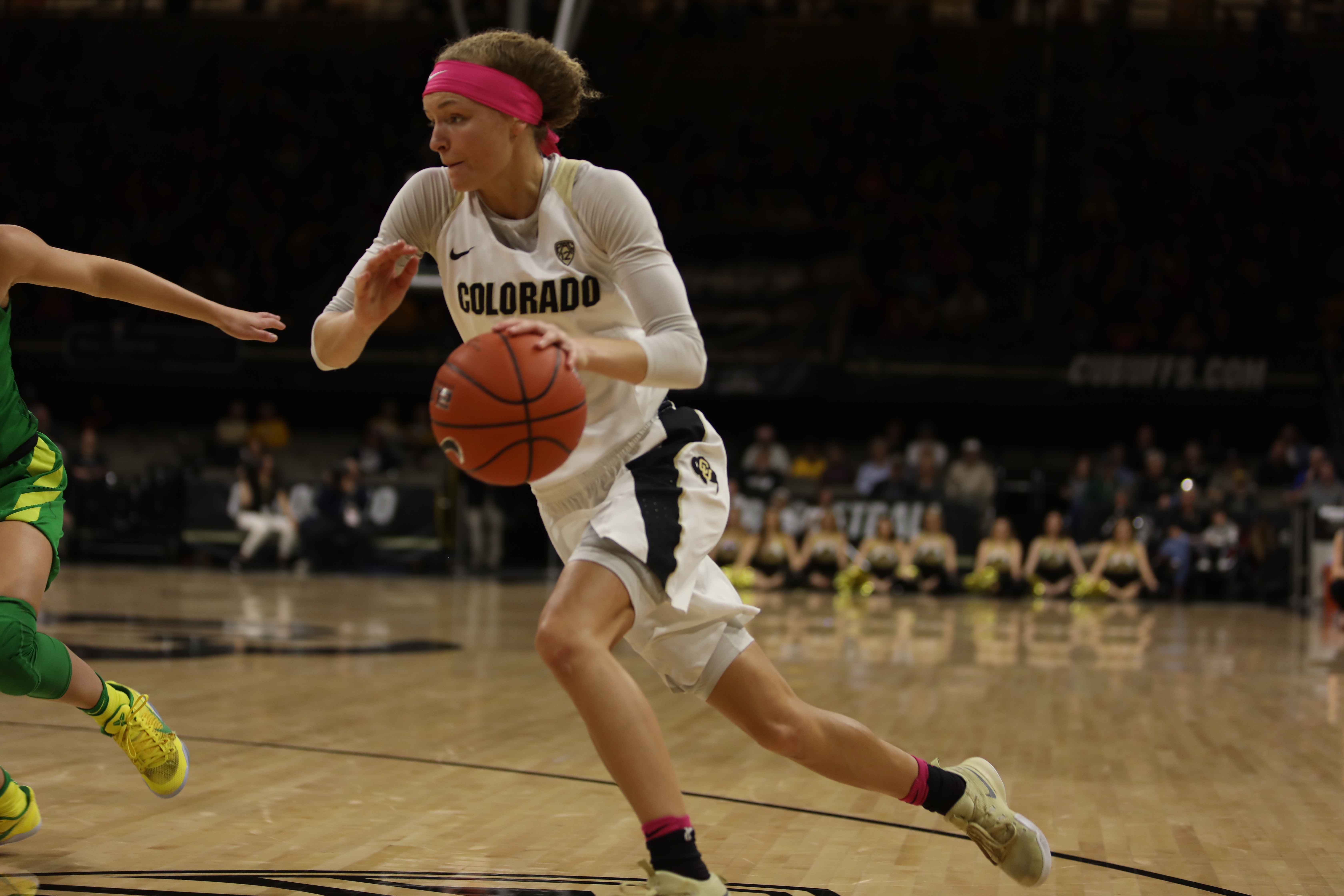 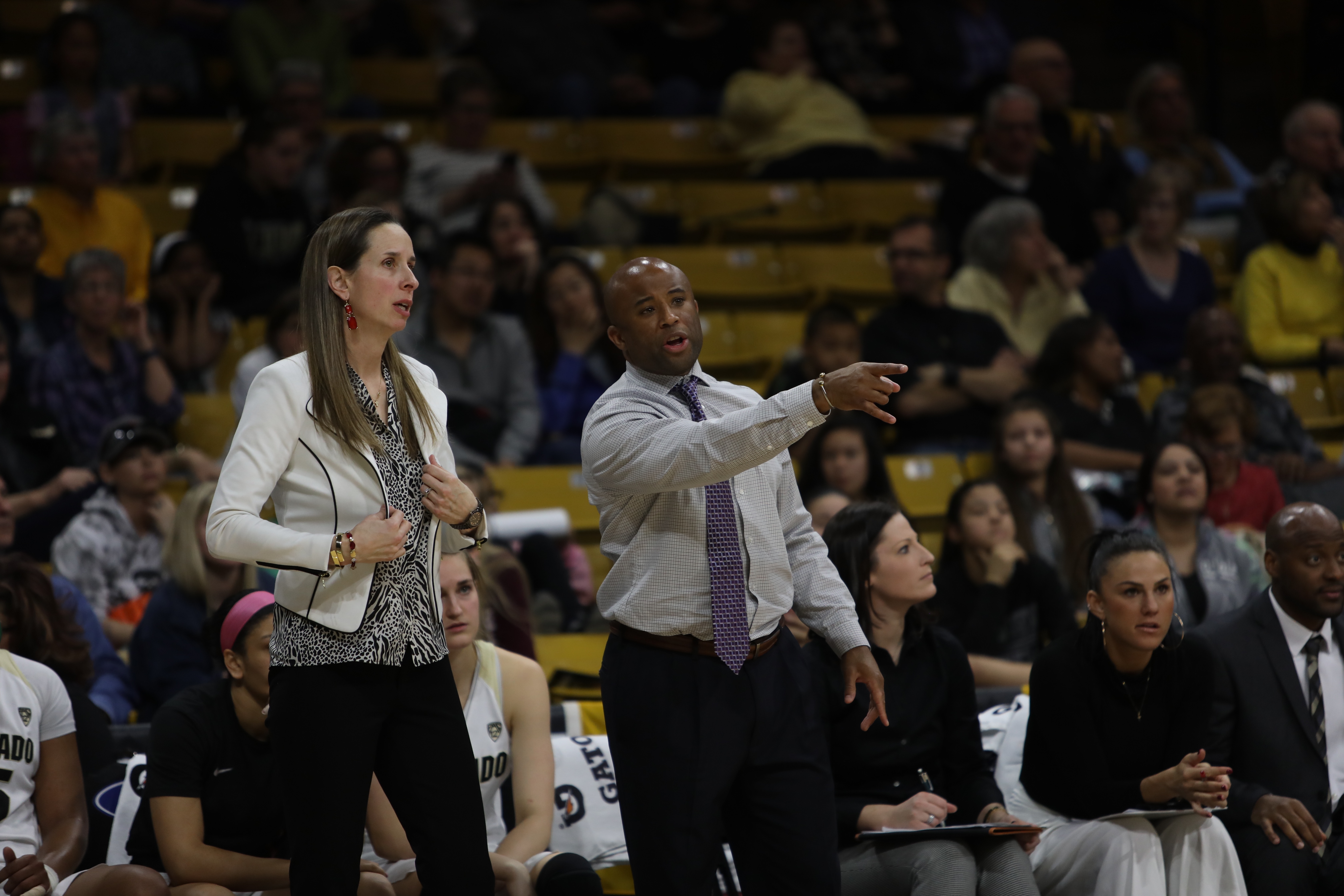 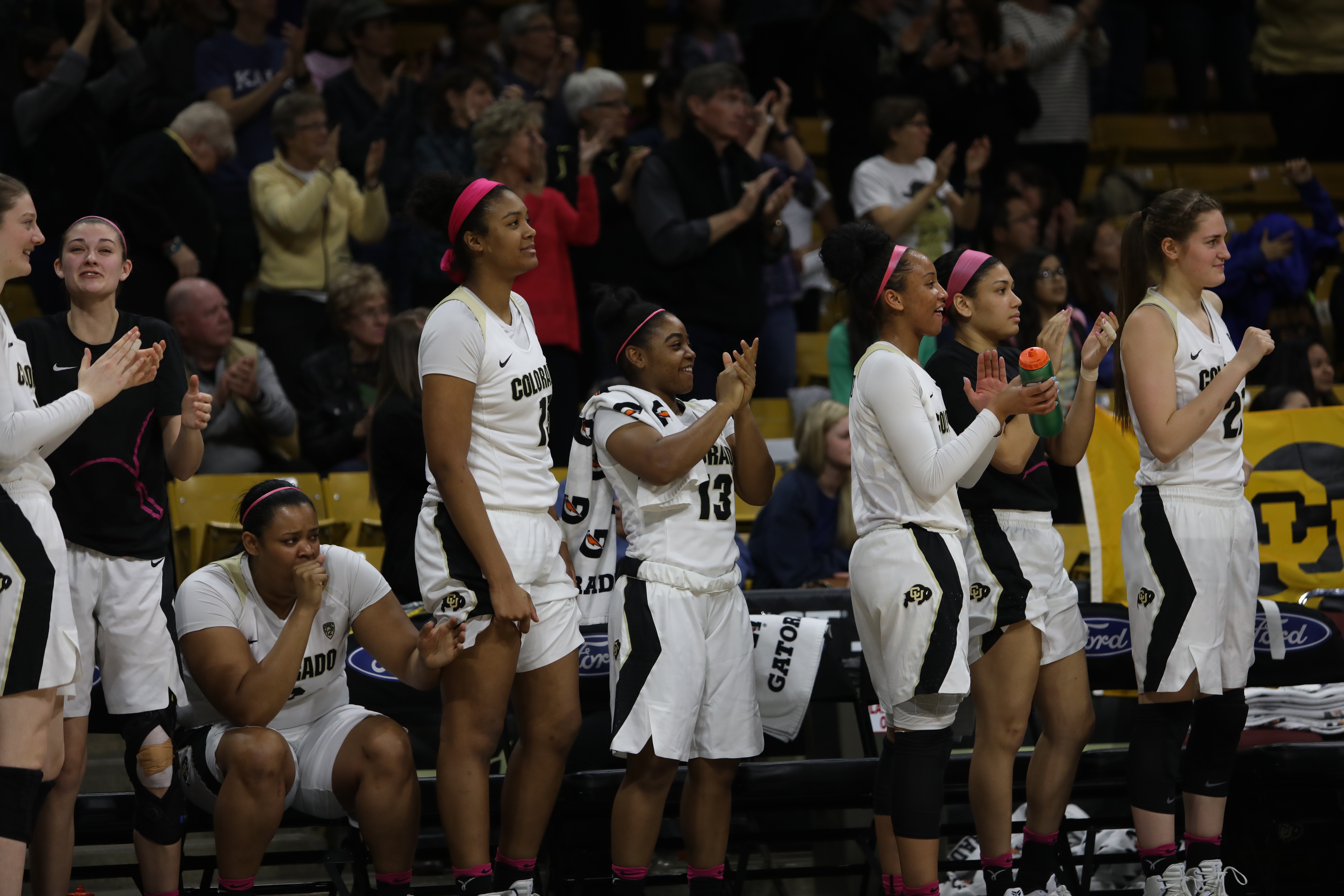 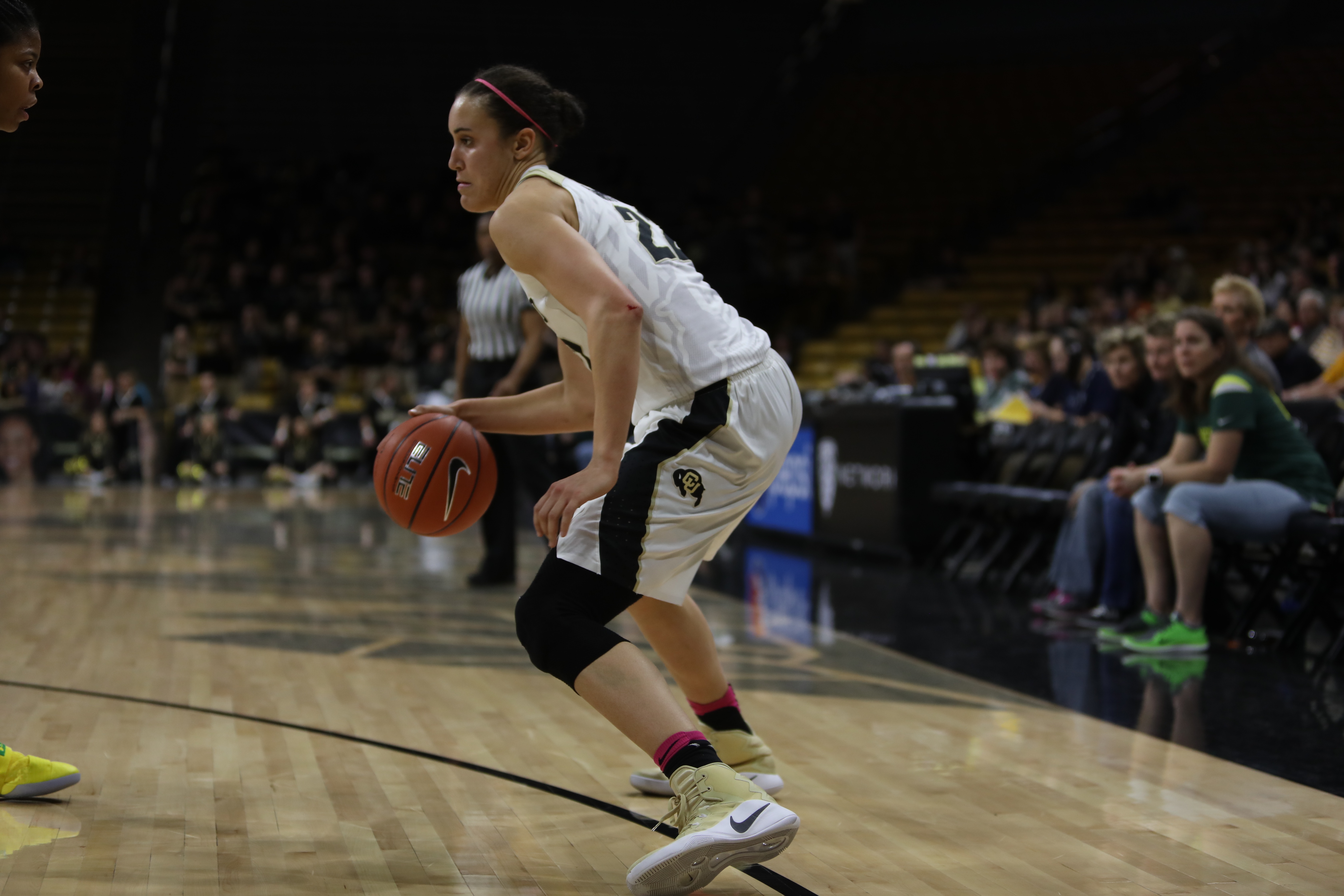 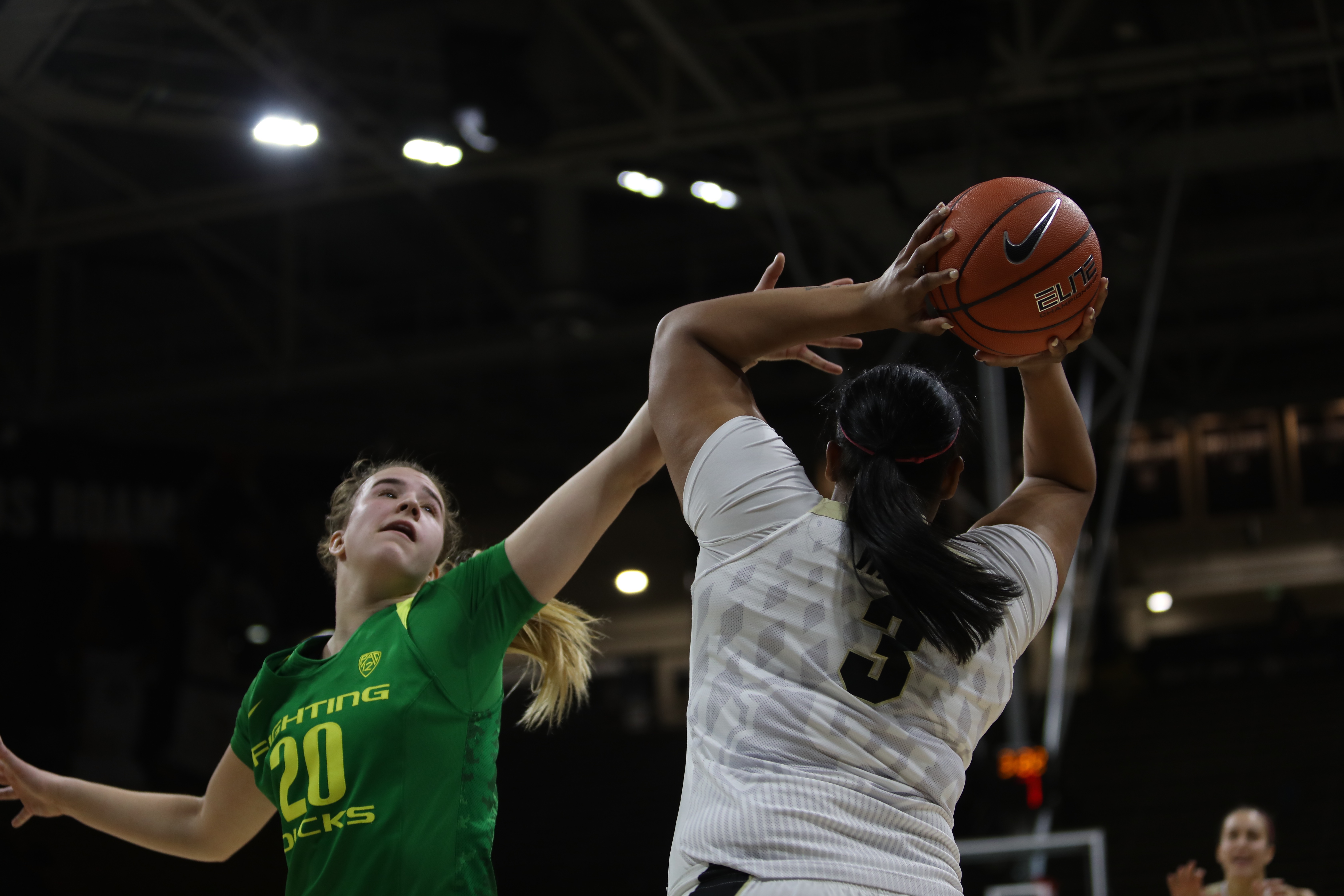