Photo gallery: Politics on campus — the lead-up to Election Day

My first election as a college student — and what a dramatic one to be at CU Boulder for. By no means was I unfamiliar with our nation’s politics; growing up in D.C. is basically the equivalent to being a political science major. Polls, policy and stump-speech gaffs became my addiction. To explore how other students reacted to this campaign, I photographed how the election affected campus and Boulder in the lead-up to Nov. 8.

College campuses are places where political philosophy can be debated in free and open discussion. The divisiveness of this election blurred the lines of discourse, debate and anger, with Hillary Clinton being a clear favorite among students, and a smaller, almost sub-culture that stood fast for Donald Trump. I photographed each group, documenting how members of each camp lived through the fall of 2016.

There was a constant background noise of politics on campus. Beseechings of “Are you registered to vote?” accompanied students’ daily walk to class. Political buttons and t-shirts entered the campus fashion. Even with our football teams rise to dominance, dining hall TV tuned in to election coverage instead of sports.

Groups organized debate watch parties, finding community in their political identity. Photographing the Trump campaign’s events in the Dark Horse bar felt like being in a distinct slice of Americana. People devoured burgers and beer while cheers of “Make American Great Again!” sounded when Trump appeared on screen. Yet breaking the expected stereotype were the gluten-free burger-eaters, staunch environmentalists and a few African-Americans who joined in support of the Republican nominee.

This collection of photographs aims to show how this controversial election permeated our campus and community. 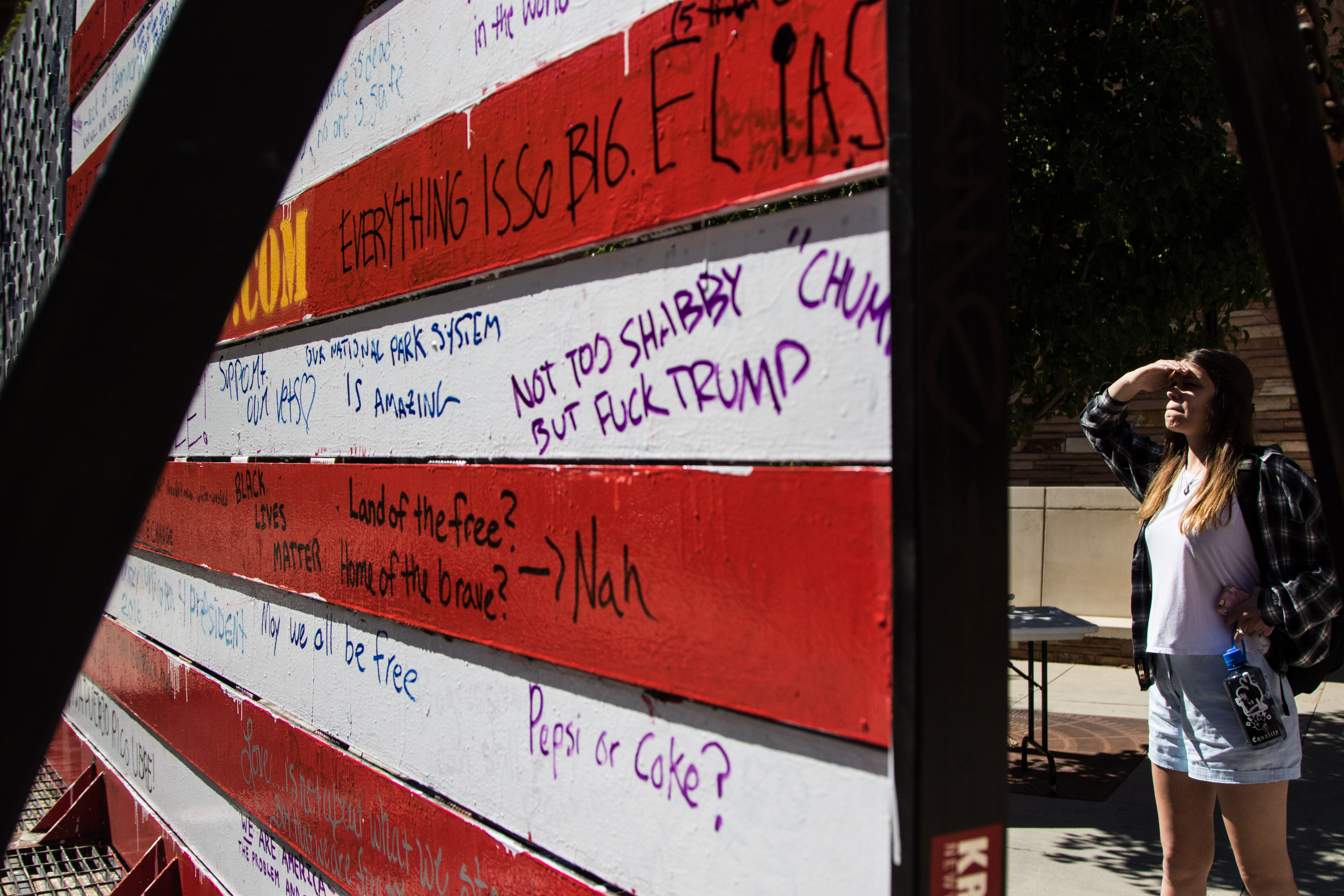 A student looks at an installation art piece brought to campus by artist Ira Hill. The installation was placed near the VAC and built to let students express their thoughts on the country during the election. (Jackson Barnett/CU Independent) 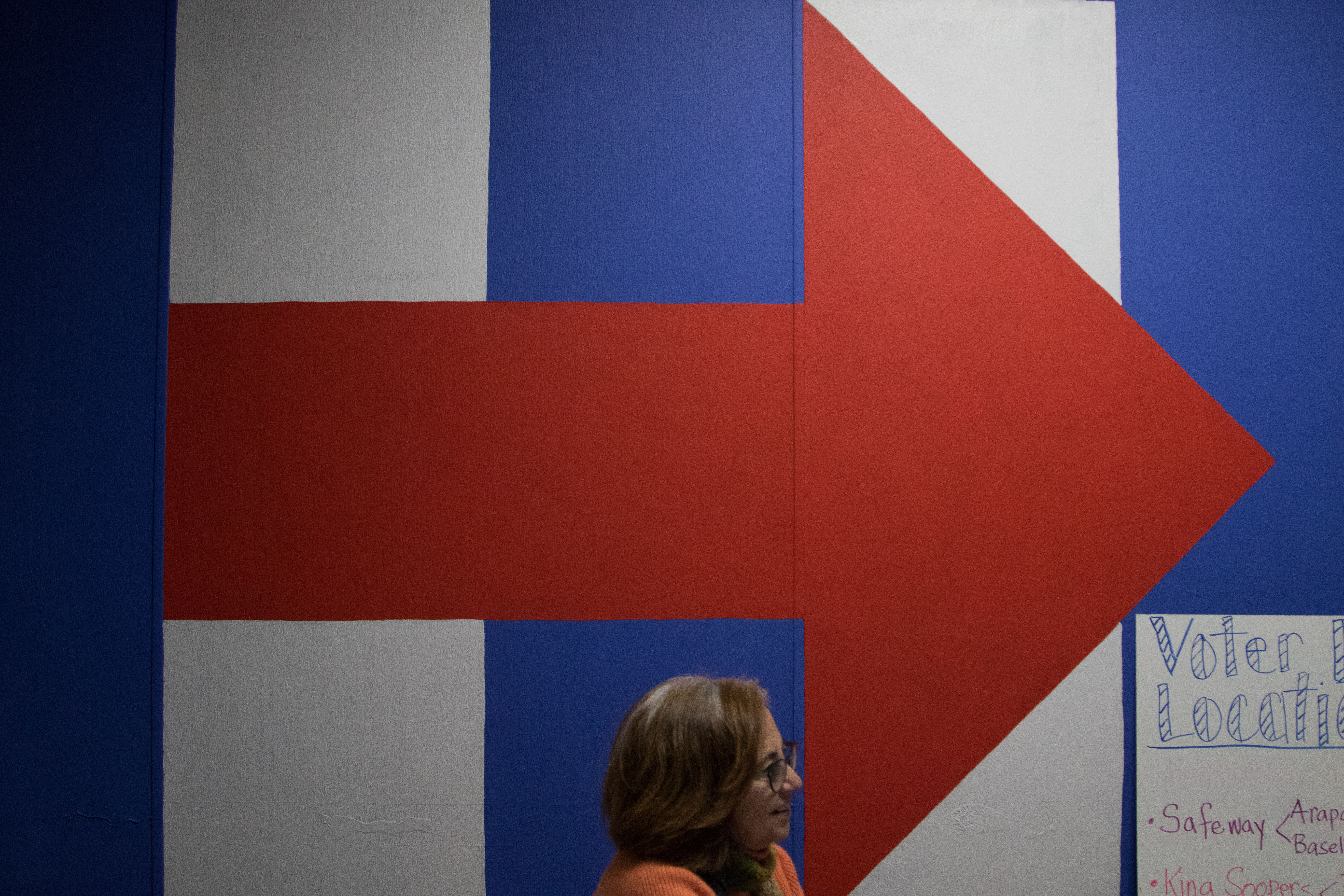 During the vice presidential debate, a woman sits at the front desk of the Hillary campaign’s office. She greets newcomers to the office and helps people, especially students, register to vote and volunteer. (Jackson Barnett/CU Independent) 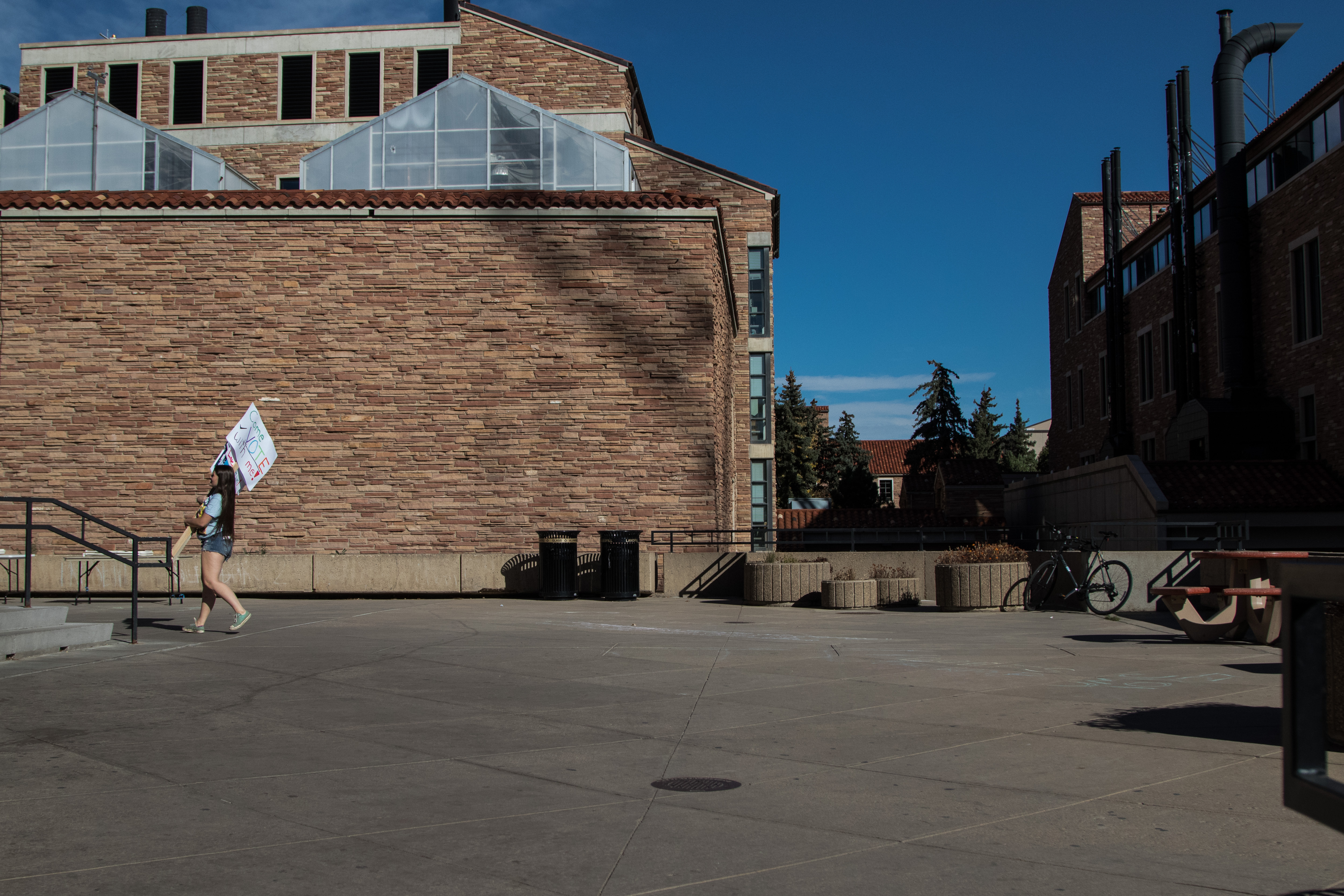 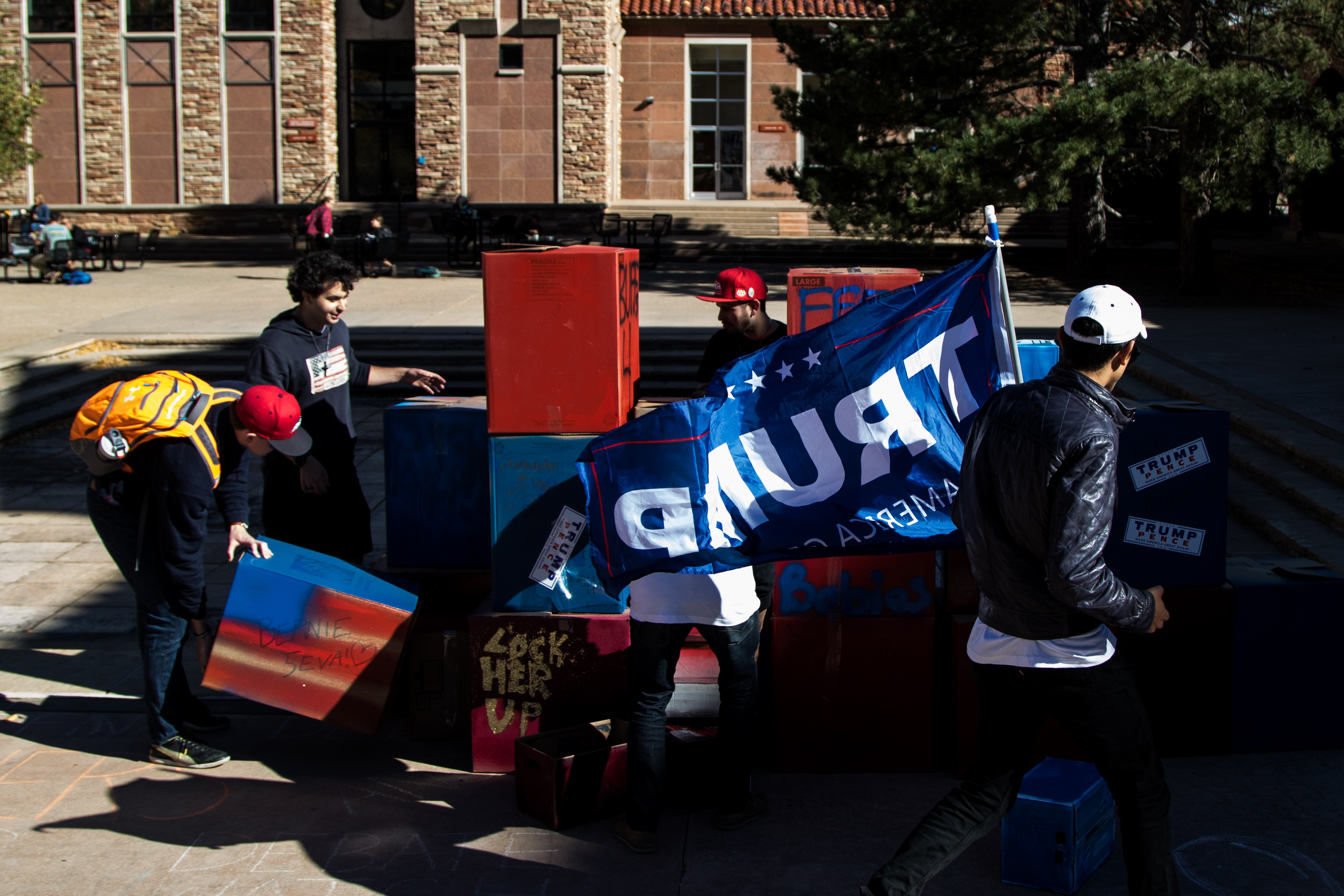 Trump supporters on campus erect a “free speech wall” modeled after Trump’s proposed border wall. Many students booed at their showing of support for Trump — one student even took to kicking over the cardboard boxes that they made their wall out of. (Jackson Barnett/CU Independent) 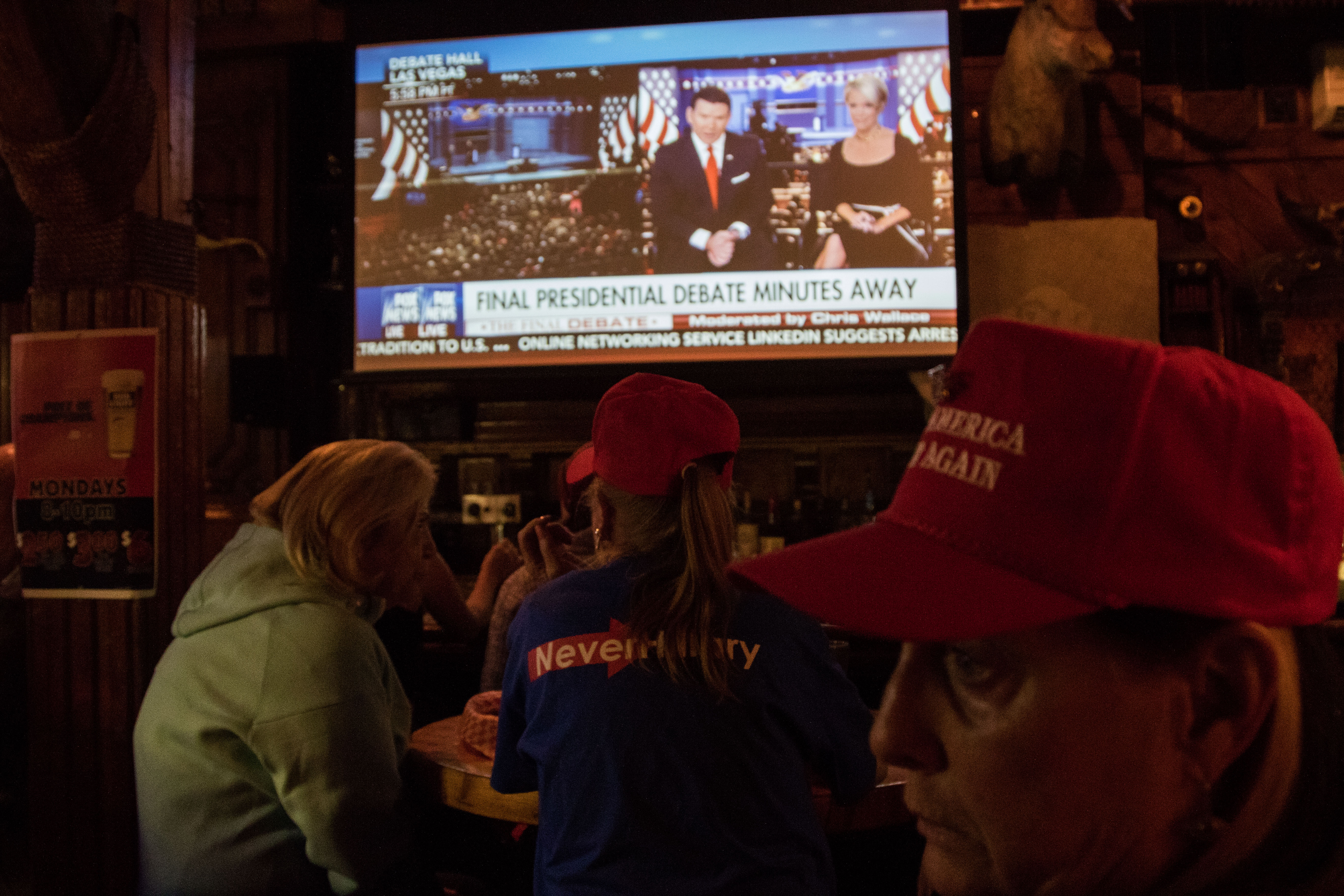 Before the final debate Trump supporters gather together to watch at the Dark Horse bar. The Dark Horse became their hideout; while many political gatherings happened across Boulder in support of Hillary, only a few, hardcore Trump supporters met in public at this classic American bar and grill. (Jackson Barnett/CU Independent) 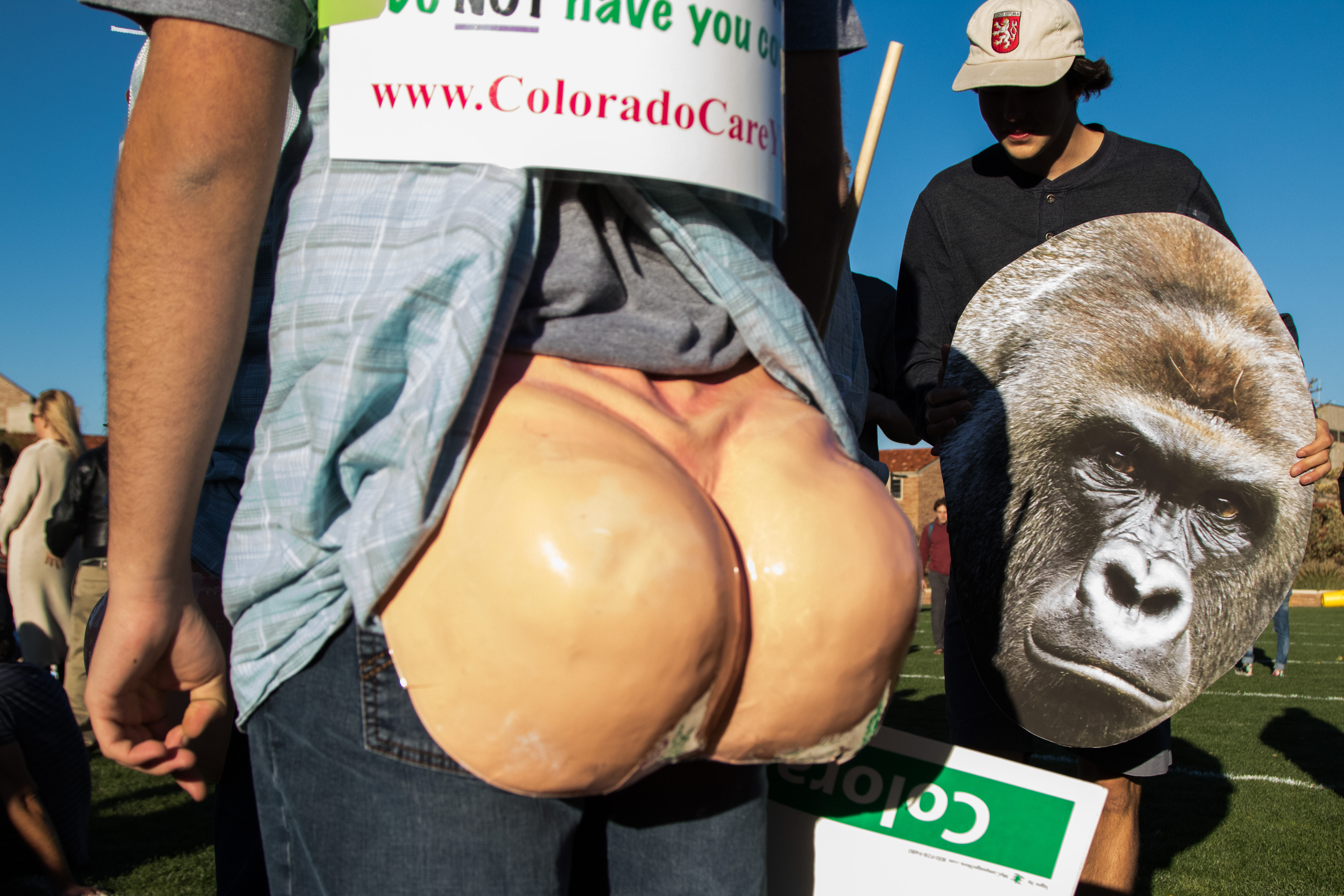 ColoradoCare supporters wear fake butts to show their support of Amendment 69 while a student holds a Harambe poster on Farrand Field. Harambe, the gorilla killed in the Cincinnati Zoo in May 2016 who rose to meme prominence on the internet, became a rallying cry for many at CU during the election. More so as a joke than for animal rights, Harambe was remembered through signs and even themed parties. (Jackson Barnett/CU Independent) 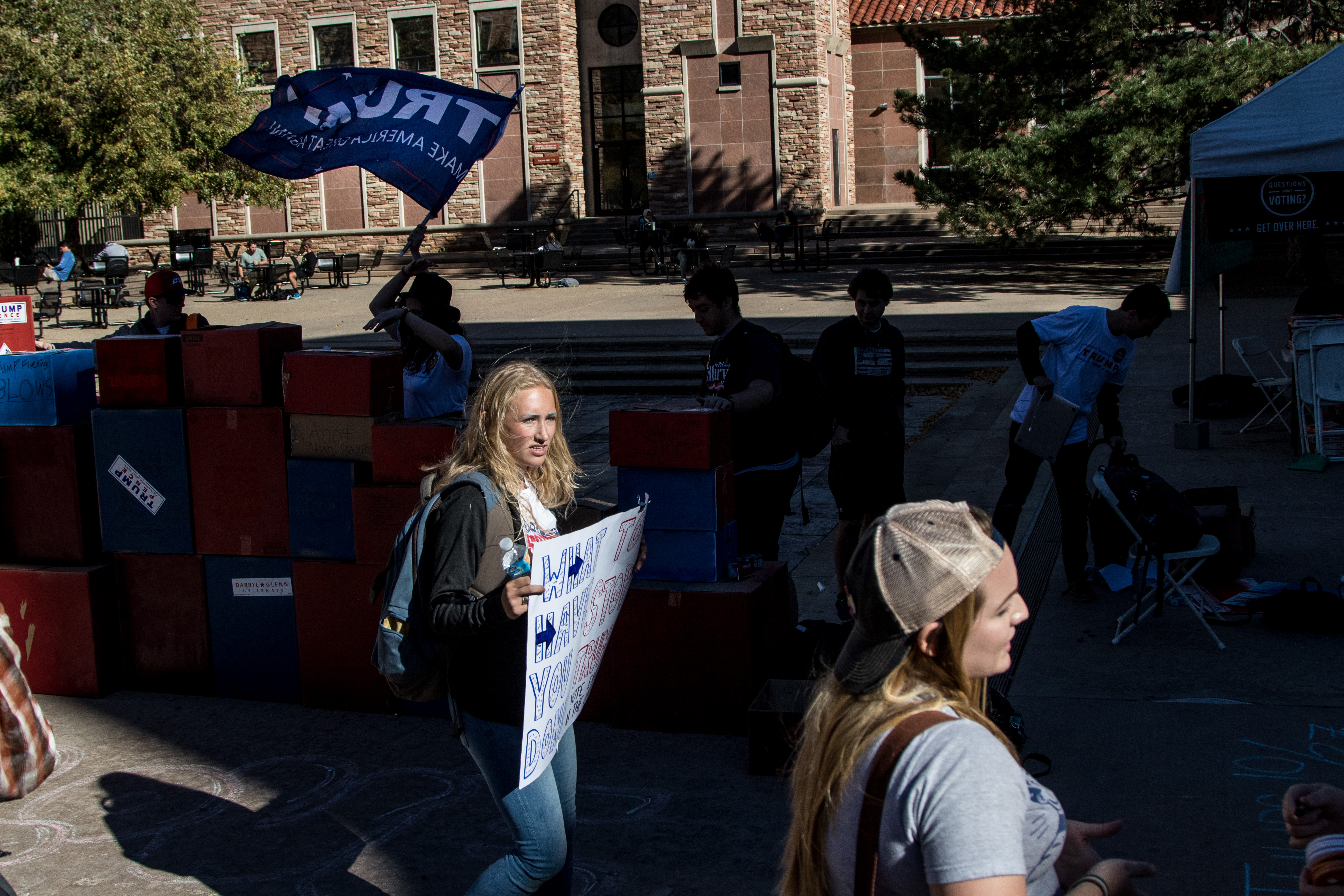 Standing tall late into the day, Sage continues to protest the Trump supporters. Her screams shared her thoughts on Trump’s sexual scandals and policies towards women. Her passion was met with laughter and sneers from some students, while others cheered her on. (Jackson Barnett/CU Independent) 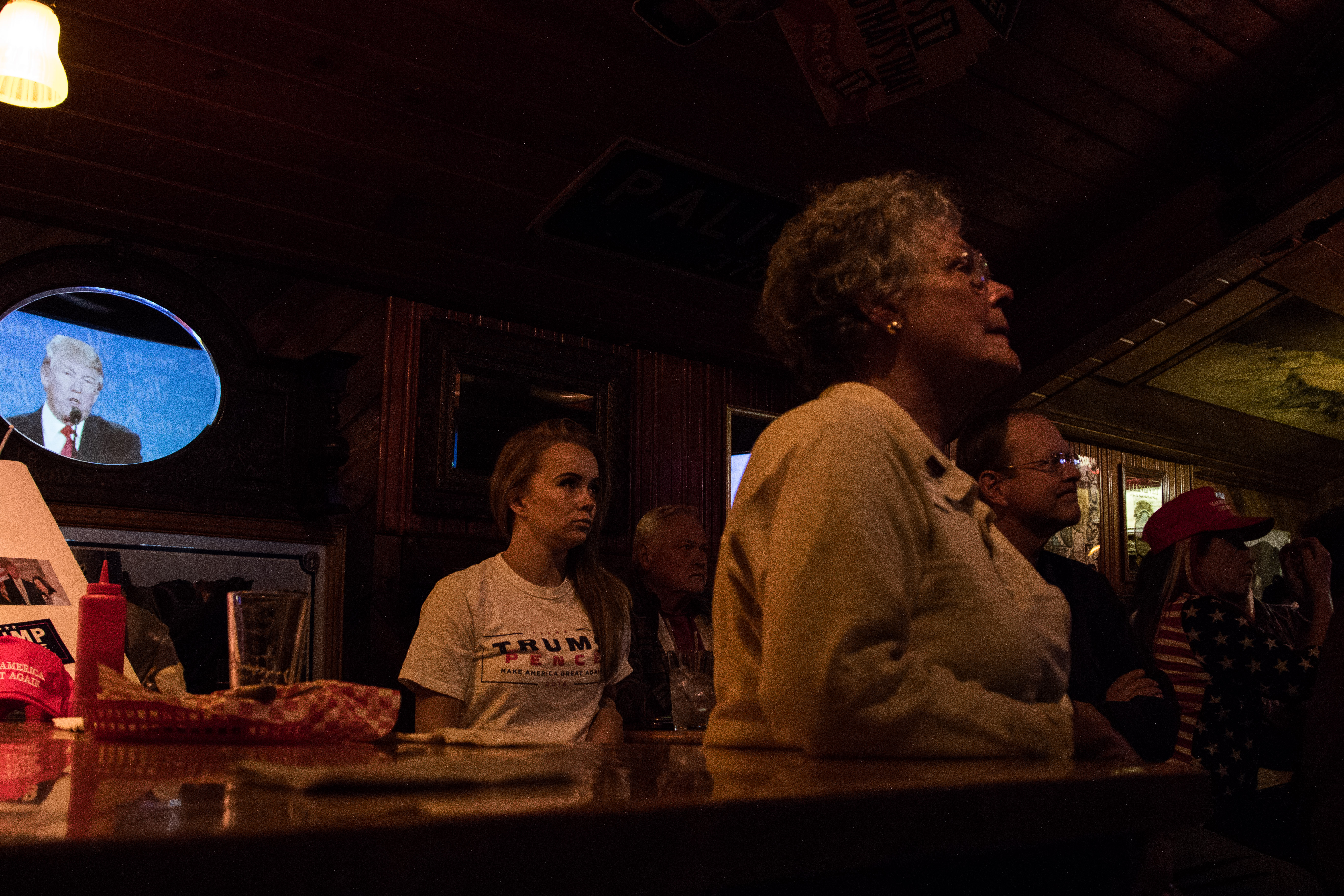 Emily (back left) watched Trump in the final debate in Las Vegas. She is a political science graduate and Trump campaign coordinating chairwoman for Boulder County. Only a few students attended the Dark Horse events, but Emily consistently was there in her Trump-Pence shirt. (Jackson Barnett/CU Independent)