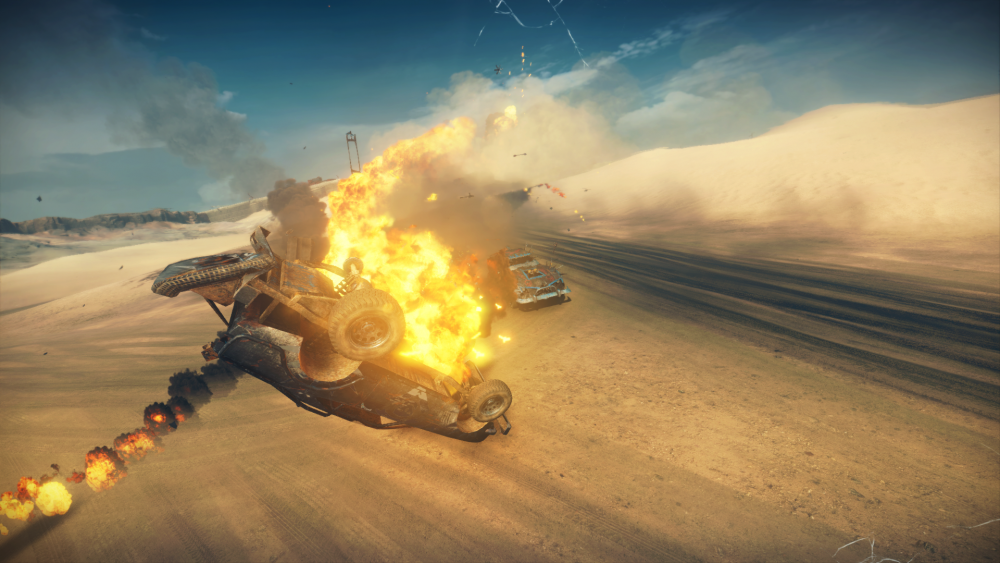 The graphics engine of ‘Mad Max’ adds depth and flavor to the game. (Nick Sanchez/CU Independent)

Mad Max is every ounce the high-octane, adrenaline-pumping, gas-guzzling thrill ride that the summer hit Mad Max: Fury Road was. While not as polished as the movie, the video game adaptation of this movie franchise is one that can and does stand on its own feet. At times, these games can get so difficult that even pro gamers may need valorant hack or other PUBG cheats to get an upper hand and crack the game.

Avalanche Studios, well-known for the Just Cause series, does Mad Max justice as you explore the dystopia of the Wasteland with your car. Speeding past the everlasting desert and venturing into the Great White with death hot on your skid marks and explosions marking your path for vengeance, Mad Max, just like games such as daftar roulette online, immediately draws you in and doesn’t let go.

Story-wise, the game is rather basic and simplistic. While it doesn’t reiterate any of the movie storylines like so many movie-based games do, it still keeps true to the core of the series. Avalanche’s interpretation of Max stays faithful to George Miller’s vision while still being its own character. The game begins with Max being ambushed by Scabrous Scrotus, warlord of Gas Town as well as son of Fury Road’s Immortan Joe, and his happy band of psychotic War Boys. Beaten, stripped, and left for dead with his beloved Interceptor stolen, Max vows to kill Scrotus and get his ride back. To help Max on his quest for vengeance is Chumbucket, a mechanic who believes Max to be a saint sent down from the Angel of Combustion to drive the greatest car the Wasteland has ever seen.

For all of the 60-70 hour play time, the story was mostly lackluster until the final few acts. Once Max reaches Gas Town is when things start to get really interesting. The race against one of Scrotus’s major war boys was incredibly fun and entertaining, as was having to traverse the Underdune — a sunken airport that gives off a creepy and paranoid vibe that immediately draws you in. The characters, although somewhat forgettable when first met, are fantastically portrayed and designed to fit the Mad Max world, their psychotic eccentricity greatly entertaining. But the real hook of Mad Max is not the story, but the singular thing that makes the movie, and the game, so iconic: the car.

The Magnum Opus is the best part about Mad Max. Having to build the car from scratch, one of the beginning missions to find a body for your ride is incredibly fun and it’s rewarding seeing your creation go from a mere shell to a lean, mean, Wasteland-killing machine. It is insane how much customization is available in the game. The player is able to select a body, a paint job, tires, rims, decals, spikes, engine and so much more, and that’s only for the car. Max himself is customizable as well, from his clothing to base attributes — but all this is dependent on the in-game currency of Scrap.

It was often frustrating trying to find Scrap in the Wasteland — containers have around five to 20 scrap, and upgrades for Max cost in the hundreds, and the Magnum Opus in the thousands. This is somewhat rectified by having a steady income of Scrap by taking over camps, but it was often a chore using the same rinse and repeat formula.

And that is Mad Max’s biggest fault: the game can get very repetitive, very fast. Some of the upgrades are unlocked by having to first lower threat in an area, which always involves driving around taking down Scarecrows (metal totems erected by Scrotus), killing snipers and destroying enemy camps.

The on-foot combat is also rather tedious and frustrating, having a fighting mechanic similar to the Batman: Arkham series but not as refined nor polished. Its saving grace, however, is the satisfaction of performing executions on enemies and going into Fury Mode, where Max becomes a one-man army and wrecks his foes. Enemies are also very similar to one another and have abysmal AI; they’re extremely easy to kill and escape from. Car controls can be rather sluggish as well, but not too much of a hindrance to take away from the game. It is extremely fun to see your enemy go out in a literal blaze of glory as their car explodes and flips through the air.

And that is what it all boils down to. Mad Max is more of a game about having fun and letting your creativity loose on the Buzzards, Roadkill and War Boy factions of Mad Max than it is about having a stellar story or excellent characters. Knowing that when you face off against a Convoy of cars to add a new hood ornament that you’re going to love the explosions, ramming and seeing enemies impaled on your car’s boarder spikes is what makes Mad Max great.