Robert Ballard, discoverer of the Titanic, speaks at CU 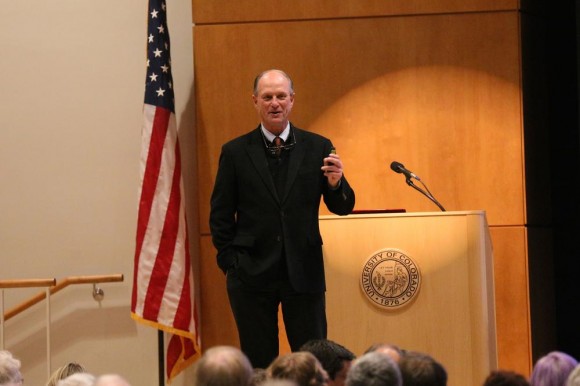 Maritime archaeologist and Oceanographer Robert Ballard delievers a speech titled, “Adventures in Deep Sea Exploration: Living the Dream,” in the Glenn Miller Ballroom. Ballard is known for discovering famous shipwrecks such as the Titanic, the Bismarck and PT109. (Nigel Amstock/CU Independent)

Dr. Robert Ballard is one of the coolest human beings alive. The 72-year-old oceanographer spoke at CU Tuesday about his career and his philosophy on education.

Ballard was born in Wichita, Kansas. His father was a test pilot with Chuck Yeager during World War II.

Ballard spent most of his early childhood in San Diego, where he became fascinated with the ocean.

“I graduated from tidal pools to snorkeling,” Ballard said.

Ballard read the book “20,000 Leagues Under the Sea“ by Jules Verne, and decided that he wanted to be like the book’s protagonist, Captain Nemo, when he grew up.

When Ballard told his parents this, they took him to a submarine base to see what it was like.

“Parents should never laugh at a child’s passion, no matter how ridiculous it sounds,” Ballard said.

Encouraged, Ballard wrote a letter to the Scripps Institute. They wrote back and invited him to a summer program.

“I get hundreds of thousands of letters, and I have a staff dedicated to answering those letters, because someone answered mine,” Ballard said.

Since then, Ballard has been hooked on the ocean.

“I can guarantee you after you leave here tonight you will not think the ocean is a big bathtub full of mud,” Ballard said. “I think of the earth as a living creature.”

If you ask a mayfly that lives for five days if the branch it’s standing on is alive, it would say of course not, Ballard said.

“We’re mayflies. … The earth is constantly turning itself over. That’s why it’s so much prettier than its sister planets.”

For the first 20 years of exploration, Ballard went down in submarines, and had some close encounters.

He “got tired of the elevator trip” in 1979 and decided to look into robotics as a means to keep exploring without having to physically be on-site.

“It’s all about moving your spirit,” Ballard said. “If I could separate my body from my spirit, I’m good.”

The U.S. Navy started funding the robots, and asked Ballard for a favor in return. Ballard was to locate two submarines in the Northern Atlantic that had been lost during the Cold War. The submarines had active nuclear reactors the Navy didn’t want laying around.

Ballard needed a cover story for this mission, and he found one in the Titanic. The rest, as they say, is history.

Ballard went on to discover the the U.S.S. Bismark, the U.S.S. Yorktown and John F. Kennedy’s boat, PT 109.

After that, Ballard decided, “What about ancient ships?”

He found ancient ships in the Mediterranean sea by estimating where the empty jugs of wine being thrown over by thirsty sailors were.

Then, he went to the Black Sea after the Berlin Wall went down and found fully preserved ships from thousands of years ago.

Ballard now owns a former East German spy ship that he named the Nautilus after Captain Nemo’s submarine in “20,000 Leagues Under the Sea.” It travels all over the world making discoveries.

Now, Ballard spends his time focused on educating the people who will eventually replace him.

“It’s all about the next generation,” Ballard said.