The Buffa-Lowdown: Colorado women’s basketball – so far, so good 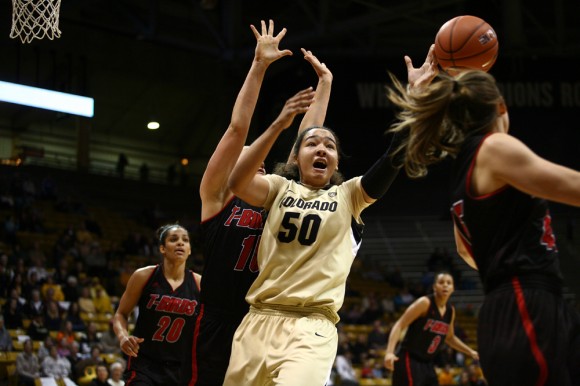 Colorado forward Jamee Swan tries to control the ball while being defended by Southern Utah forward Carli Moreland (15) during an NCAA women’s basketball game between Colorado and Southern Utah, Sunday, Dec. 29, 2013 at the Coors Events Center in Boulder. Swan will have to step up this season after the loss of star forward Arielle Roberson. (Kai Casey/CU Independent)

Two weeks into preseason practice is far from a make-or-break point in any team’s season, but it does provide enough time for a coach to start getting a feel for her team. According to Colorado women’s basketball head coach Linda Lappe, what her team has showed thus far is encouraging.

“We get better every day and we’re progressing on a great path,” Lappe said after practice last Friday. “I’ve been really impressed by our freshmen and how they’ve been able to come in and learn the system, but also our veterans and how they’re leading.”

That veteran leadership has been especially important in the implementation of Colorado’s defense with the new players. Developing an understanding of the importance of defense, and the team’s defensive philosophy, are two things Lappe identifies as key steps in the learning process for the freshmen on this team.

“I feel like they all understand that [defense is] important,” Lappe said of the freshman. “So that’s the number one, that’s the thing that’s helping them the most right now — understanding that to get on the floor you have to play defense.”

One player who we’ll definitely be seeing on the floor in a significant role this season is junior forward Jamee Swan. Swan, who I highlighted last week as a leading candidate to inherit some of Arielle Roberson’s scoring and rebounding responsibilities, will look to make a permanent jump into the starting lineup this season after starting eight games last season.

“Jamee has to be one of our main scorers on the low block,” Lappe said of Swan, highlighting Swan’s scoring versatility and her ability to both drive to the hoop and make outside shots.

Lappe emphasized that as a junior, Swan “should be just playing, and Jamee is best when she can just play.” Lappe had plenty to say about Swan in terms of her mentality, mentioning at different points her “energy, competitiveness and great instinct”– and her ability to “inspire her teammates by bringing that next level every single day.”

On another note, Jamee Swan is 6 feet 2 inches tall, and she has some serious jumping ability. I saw her grab rim at practice, and I’m fairly confident she can dunk if necessary. So that’s certainly something to keep an eye on this season.

“Building the fan base”

This weekend the team held a “Fantasy Camp” open to women 20 years of age or older. The camp was staffed by coaches and players from the team who volunteered their time.

“It’s a lot of just understanding about our program, understanding the skills that they should look for from our players on the court,” Lappe said.  “It’s giving them really an inside look to our program.”

The attendees participated in skill sessions with the coaches and players and also got to take a look at a sample scouting report that the Buffs would use preparing for an opponent. Former Colorado women’s basketball team member Bonita Martin, who is now a basketball official, spoke at the camp on things to look for in basketball officiating.

Lappe said that for her the camp is “more about just building the fan base and getting that camaraderie and for our fans to understand how hard it is to really be on the court and to be one of our players.”